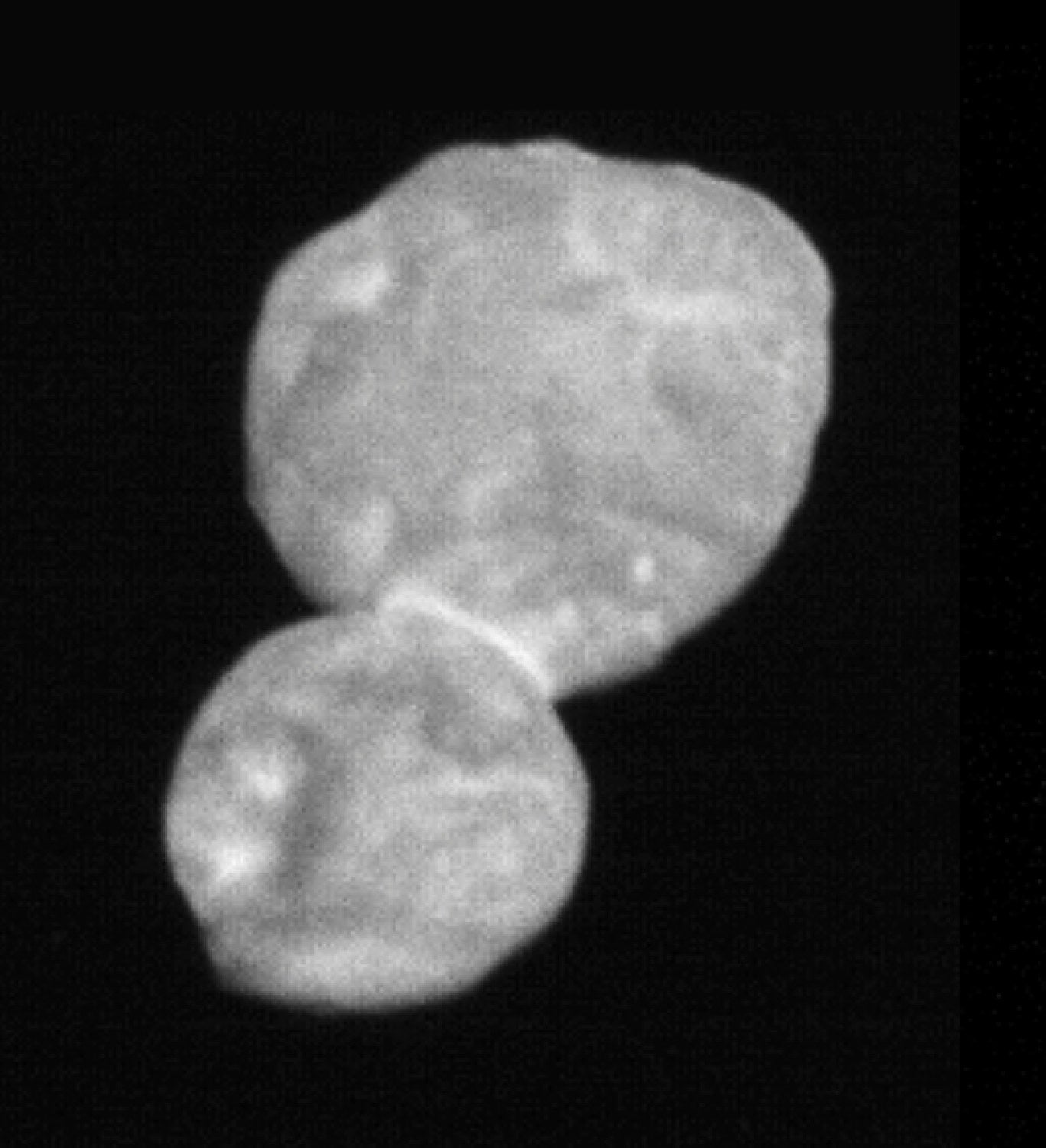 This image taken by the Long-Range Reconnaissance Imager (LORRI) is the most detailed of Ultima Thule returned so far by the New Horizons spacecraft. It was taken at 5:01 Universal Time on January 1, 2019, just 30 minutes before closest approach from a range of 18,000 miles (28,000 kilometers), with an original scale of 459 feet (140 meters) per pixel. NASA/JOHNS HOPKINS UNIVERSITY APPLIES PHYSICS LABORATORY/SOUTHWEST RESEARCH INSTITUTE

WASHINGTON, United States – Four billion miles from the sun near the edge of the Solar System floats Ultima Thule, an icy celestial body that NASA scientists announced Wednesday is aptly shaped like a giant snowman.

The first detailed images beamed back from the US agency’s New Horizons mission allowed scientists to confidently determine the body was formed when two spheres, or “lobes,” slowly gravitated towards each other until they stuck together — a major scientific discovery.

The New Horizons spacecraft on Tuesday flew past Ultima Thule, which was discovered via telescope in 2014 and is the farthest and potentially oldest cosmic body ever observed by a spacecraft.

Before that flyby, the only image scientists had was a blurry one showing Ultima Thule’s oblong shape, resembling something like a bowling pin or a peanut.

“That image is so 2018… Meet Ultima Thule!” said lead investigator Alan Stern, doing little to hide his joy as he revealed a new sharper image of the cosmic body, taken at a distance as close as 17,000 miles (about 27,000 kilometers) with a resolution of 140 meters per pixel.

“That bowling pin is gone — it’s a snowman if anything at all,” Stern said during a NASA briefing.

“What this spacecraft and this team accomplished is unprecedented.”

Ultima Thule’s surface reflects light about as much as “garden variety dirt,” he said, as the sun’s rays are 1,600 times fainter there than on Earth.

The body is roughly 19 miles long and completes its own rotation in about 15 hours. NASA dubbed the larger lobe Ultima, and the other, which is about three times smaller, Thule.

“This is the first object that we can clearly tell was born this way” Stern said, instead of evolving as a sort of “bi-lobe.”

“This really puts the nail on the coffin now. We know that this is how these kinds of objects in many cases form.”

Some 4.5 billion years ago a cloud of frozen pebbles began to join forces, gradually forming two bodies – Ultima and Thule.

Slowing turning, they eventually touched at each other at what mission geology manager Jeff Moore called an “extremely slow speed” — maybe just one to a few miles per hour.

If such a meeting occurred between two cars in a parking lot, he said, no driver would bother writing it up. The lobes, according to Moore, are really just “resting on each other.”

“New Horizons is like a time machine, taking us back to the birth of the solar system,” Moore said. “We are seeing a physical representation of the beginning of planetary formation, frozen in time.”

Carly Howett, another researcher of the mission, noted that “we can definitely say that Ultima Thule is red,” perhaps due to irradiation of ice.

NASA researchers promised fresh announcements would drop Thursday, including on the composition and atmosphere of Ultima Thule, as new images with even more precise resolution have come through. /cbb

TOPICS: NASA, New Horizons, snowman, Solar system, Space, Ultima Thule
Read Next
Facebook Messenger starts testing Dark Mode in ‘certain countries’
EDITORS' PICK
Mandaluyong fire put under control hours after it started
Leveling up your ‘lutong bahay’ with the kitchen companion you never knew you needed
Bato de la Rosa, Risa Hontiveros back bill increasing female recruitment quota in PNP
Quarantine violations still punishable despite deleted provisions in ‘Bayanihan 2’ – Bato dela Rosa
Someone from the Philippines can become $356 Million richer this Tuesday
Cherry Mobile teams up with Cloud Panda PH, launches online store
MOST READ
‘If I had not been SolGen, I will make you eat your words,’ Calida tells Coco Martin
51 percent of German firms holding back investments in PH, but not because of COVID-19
5 car dealership outlets shutting down
Senate OKs bill authorizing president to postpone opening of classes beyond August
Don't miss out on the latest news and information.