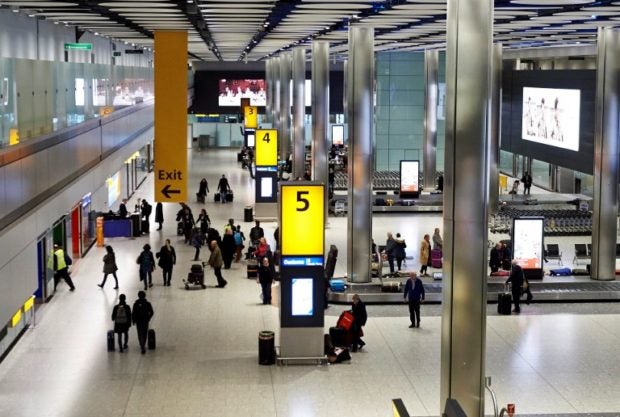 Passengers collect their luggage from the baggage reclaim area of Terminal 5 at London Heathrow Airport in west London on December 19, 2018. AFP

The British army was deployed to London Gatwick on December 20 after the airport grounded all flights, leaving tens of thousands of passengers stranded over some of the busiest days of the year.

“We have invested several million pounds (dollars, euros) in providing ourselves with the equipment and the technology that the armed forces deployed over Christmas,” a Gatwick Airport spokesman told AFP.

He said investment was made “in the days immediately after” the disruption but declined to give details, saying only that it had “equivalent capabilities” to the technology used by the military.

A spokesman for London Heathrow, Britain’s biggest airport, also said they would be investing in anti-drone technology.

“The safety of our passengers and colleagues remains our top priority. Working closely with relevant authorities including the Met Police, we are constantly looking at the best technologies that help remove the threat of drones,” he said.

Two people, a middle-aged couple who lived near Gatwick, were arrested over the suspected “criminal use of drones” but later released without charge.

The police were criticized for their handling of the incident after a detective admitted it was a “possibility” that no drones had actually been in the area — despite the discovery of a damaged device near the airport perimeter. /ee