World efforts to check climate change may be too late – study 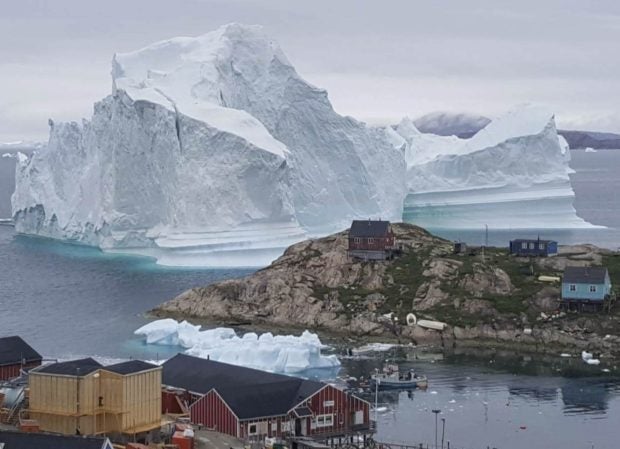 MELTING AWAY Greenland’s ice sheets, such as this one behind the village of Innaarsuit in Avannaata municipality, are melting faster than previously thought, according to a new study. —AFP

The world is on course to miss its “best chance” of preventing runaway climate change by ensuring global greenhouse gas emissions peak in 2020, the World Resources Institute (WRI) warned on Tuesday.

WRI’s analysis came as a new study, according to CNN, found that climate change is causing Greenland’s massive ice sheets to melt much faster than previously thought and it may be “too late” to do anything about it.

The findings could have dire implications for the planet’s low-lying islands and coastal cities.

Eight of Earth’s 10 largest cities are near coasts, and 40 percent to 50 percent of the planet’s population lives in areas vulnerable to rising seas.

Point of no return

Michael Bevis, a professor of geodynamics at Ohio State University and the lead author of the study, says the research found that humanity may have passed the point of no return when it comes to combating climate change.

“The only thing we can do is adapt and mitigate further global warming — it’s too late for there to be no effect,” Bevis said.

“This is going to cause additional sea level rise. We are watching the ice sheet hit a tipping point,” he added.

Even as Earth is buffeted by superstorms, droughts and flooding made worse by rising seas, and as greenhouse gas emissions continue to rise globally, an analysis by WRI showed that efforts to limit temperature increases are falling well short.

In 2017, experts identified six key milestones that mankind must hit by 2020 if the Paris climate goal of limiting global temperature rises to 1.5 degrees Celsius is to have a fighting chance of being met.

They include radical changes to how we get our electricity, and to how goods and services are distributed worldwide.

Chief among these are an immediate phasing out of fossil fuels, including a total halt to new coal power plant construction within two years, as well as an end to dirty energy subsidies.

WRI on Tuesday said that achieving the 2020 goals was Earth’s “best chance” of honoring the Paris deal goals.

Some progress has been made in renewable energy and green finance, it said, but headway was deemed “insufficient” across a host of sectors.

Renewables, such as wind and solar, now account for roughly 25 percent of global electricity production, not too far from the 2020 goal of 30 percent.

But the world remains seriously off course when it comes to the phasing out of greenhouse gas-producing fossil fuels.

The Mission 2020 campaign says no new coal-fired power plants should be constructed after the end of next year, and advises that all existing coal power stations should be retired by then.

While the pace of expansion has slowed, the world is still seeing a net gain in coal capacity.

More than 28 gigawatts of coal power was retired from the global grid last year but 65 gigawatts was added.

Scientific consensus is hardening that for Earth to avoid the direst consequences of climate change, emissions must peak by 2020 and drastically reduce thereafter.

WRI said this was the “best chance” for the global economy to be carbon neutral by mid-century and to stay beneath the 1.5 C threshold.

Fossil fuel subsidies must also be entirely eliminated by 2020 to stay on track to the Paris goals, it said.

“Subsidies for coal, oil and gas essentially act as a negative carbon price, reducing the costs for these polluting substances and taking up funding that could instead be used for other expenditures, including investment in sustainable development,” WRI said.

It also called for better transparency and reporting by governments and the private sector to allow for more targeted green action to take place.

CNN reported that a study published last month in Nature found that Greenland’s ice sheets had been melting at an “unprecedented” rate, 50 percent higher than preindustrial levels and 33 percent above 20th-century levels.

The study Bevis led, published on Monday in the Proceedings of the National Academy of Sciences, found that Greenland shed approximately 280 gigatons of ice per year, causing global sea level to rise by 0.8 millimeters (0.03 inches).

Bevis and his coauthors found that by 2012, the rate of ice loss had accelerated to nearly four times what it was in 2003. They also found this acceleration largely took place in Greenland’s southwest.

Greenland’s ice has historically melted in cycles due to natural weather phenomena, but rising temperatures have exacerbated the trend. —Reports from AFP and CNN