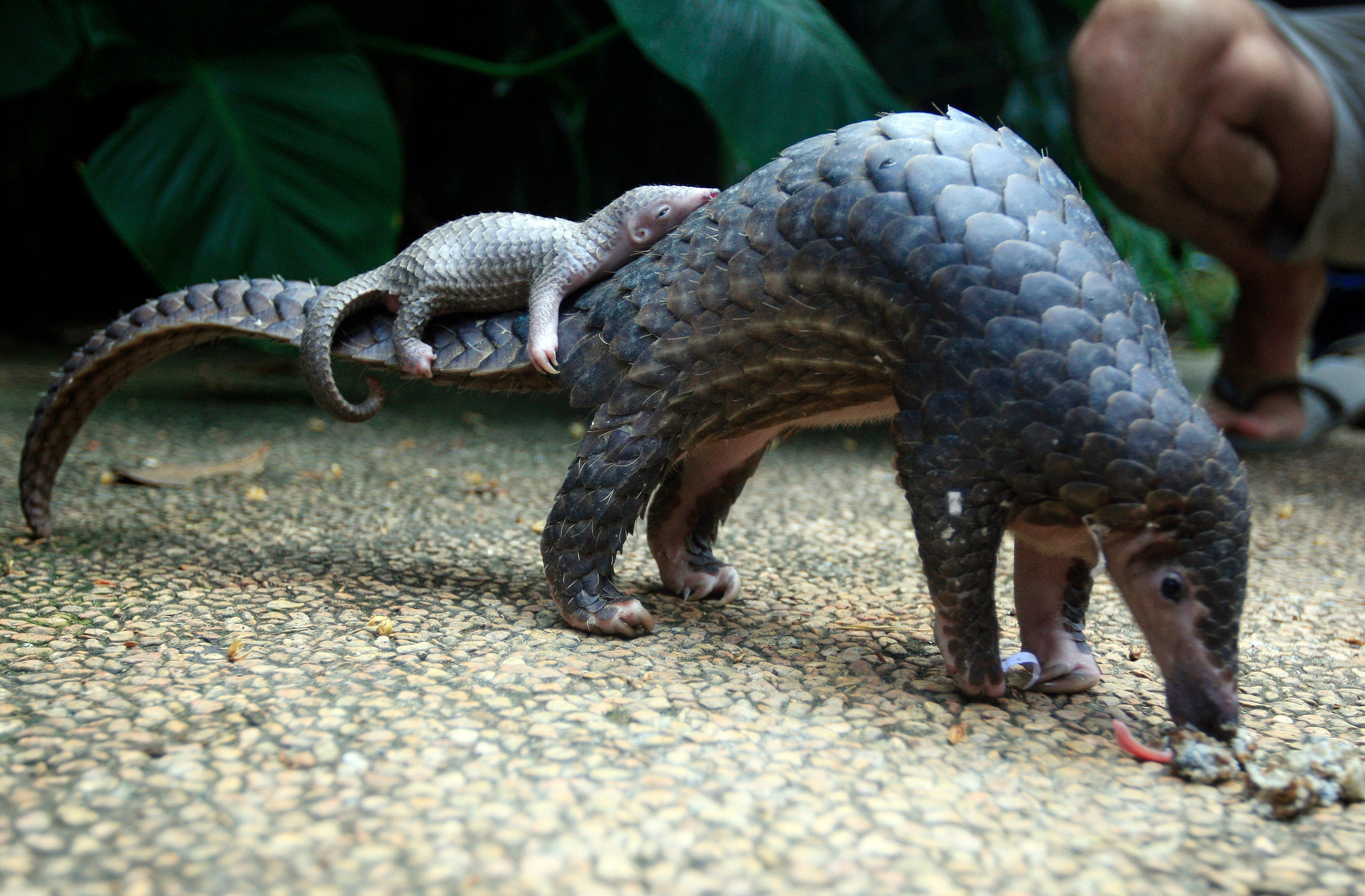 FILE – In this Thursday, June 19, 2014 file photo, a pangolin carries its baby at a Bali zoo in Bali, Indonesia. Their scales made of keratin, the same material as in human finger nails  are in high demand for Chinese traditional medicine, to allegedly cure several ailments, although there is no scientific backing for these beliefs. (AP Photo/Firdia Lisnawati, File)

WASHINGTON  — When Chinese police found them in the trunk of a smuggler’s car, 33 of the trafficked pangolins — endangered scaly mammals from southern China — were still alive, wrapped in plastic bags soaked with their own urine.

But the fate of the creatures — whose scales are worth nearly their weight in silver on the black market — was not a happy one. Every last pangolin died in government captivity within a few months of the August 2017 seizure.

A pioneering environmental nonprofit in Beijing has launched an investigation, called “counting pangolins,” to figure out what happens to such animals recovered from the illegal wildlife trade. Its findings so far highlight discrepancies between environmental laws and outcomes.

China is hardly unique. The number of environmental laws on the books worldwide has increased 38-fold since 1972, according to an exhaustive U.N. Environment report released Thursday. But the political will and capacity to enforce those laws often lags — undermining global efforts to curb issues like wildlife trafficking, air pollution and climate change, the report found. 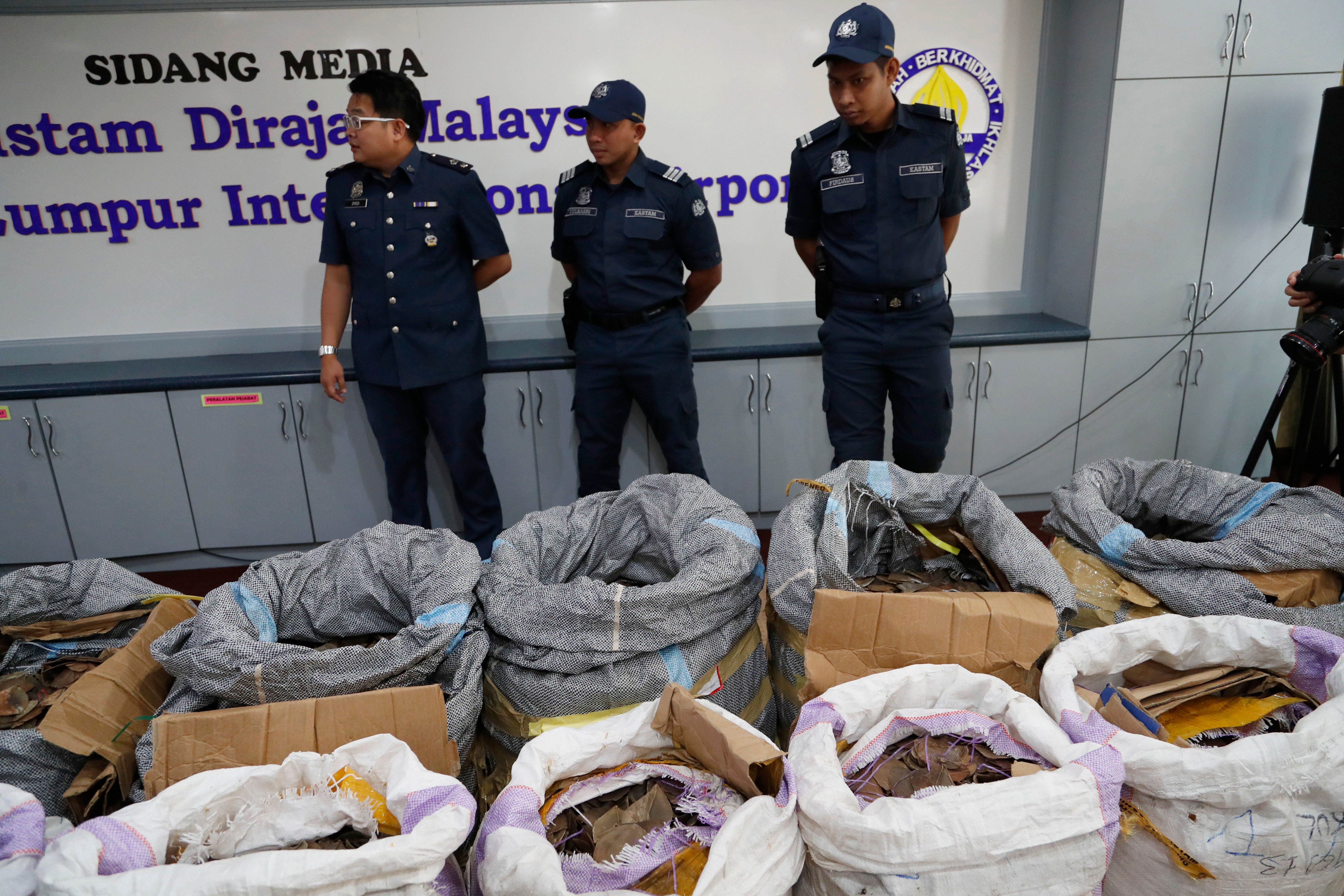 FILE – In this Monday, May 8, 2017 file photo, Malaysian Customs officials stand next to seized pangolin scales during a news conference in Sepang, Malaysia, announcing the 9.2 million ringgit ($2.1 million) seizure, believed to have been smuggled from Africa. The price of pangolin scales in China has risen from $11 per kilogram (2.2 pounds) in the 1990s to $470 in 2014, according to researchers at Beijing Forestry University. (AP Photo/Vincent Thian)

“The law doesn’t self-execute,” said Carl Bruch, a study co-author and director of international programs at the Environmental Law Institute in Washington, D.C.

Each of the 33 pangolins transferred to the care of a government-run wildlife rescue center in China’s Guangxi province died within three months — according to records obtained by the nonprofit China Biodiversity Conservation and Green Development Foundation and shown to the Associated Press.

What’s still unclear is what happened to their bodies.

Pangolins are insect-eating, scaly mammals — playfully described by the International Union for Conservation of Nature as “resembling an artichoke with legs and a tail.” Their scales — made of keratin, the same material in human finger nails — are in high demand for Chinese traditional medicine, to purportedly cure arthritis, promote breast-feeding for mothers, and boost male virility, although there is no scientific backing for these beliefs.

The price of pangolin scales in China has risen from $11 per kilogram (2.2 pounds) in the 1990s to $470 in 2014, according to researchers at Beijing Forestry University.

Scientists have designated all eight species of pangolins as being at risk of extinction —  four species in Asia, and four in Africa. More than 1 million pangolins were trafficked between 2004 and 2014 —  for their scales, meat and blood — with China and Vietnam as the largest markets.

In the last two decades, the number of pangolins worldwide has dropped by about 90 percent.

In 2016, the Convention on International Trade in Endangered Species of Wild Fauna and Flora (CITES) adopted a worldwide ban on commercial trade in pangolins, and China later approved that ban. Pangolins are also listed as a protected species in China. While Chinese state-run media have publicized a few high-profile poacher busts, watchdogs say a thriving black market for endangered-animal parts persists.

In November 2017, customs officials in Shenzhen seized 13.1 tons (11.9 metric tonnes) of pangolin scales — reportedly the largest-ever seizure of scales from Africa — according to state media. The penalties offenders face are not always publicized, but in another case involving a smaller shipment of scales, two smugglers received prison sentences of five years, state media said.

“It’s significant that China has adopted laws against trade in many endangered species, but the law itself isn’t enough to protect a species from extinction,” said Jinfeng Zhou, director of the China Biodiversity Conservation and Green Development Foundation.

Zhou wants the government to issue public records tracking all living and dead pangolins seized by authorities — and to offer evidence that contraband, including pangolin scales, is destroyed before it enters black markets.

“We are determined to know what happens to the pangolins,” said Sophia Zhang, a researcher at the biodiversity group. After reading news reports about the August 2017 poaching bust, she filed information requests to government agencies and traveled to Guangxi to visit the wildlife rescue center.

The Guangxi Forestry Department, which manages the wildlife rescue center, declined AP’s requests for an interview and comment. China’s state-run news service Xinhua reported in December 2018 that China remains committed to stopping pangolin trafficking, noting there were 209 pangolin smuggling busts from 2007 to 2016.

Less official attention has been paid to what happens after these busts.

In Guangxi, Zhang saw that pangolins were kept in small cages and fed cat food at the wildlife center, whereas wild pangolins eat termites. She said she had tried to coordinate with Save Vietnam’s Wildlife, a nonprofit, to bring shipments of termites to feed the pangolins, but the center declined the offer.

After the animals died, the center wouldn’t reveal what happened to their scaly bodies. But in other instances, the same center has turned over live pangolins to industry groups — including a steel factory in Guangdong province and a farm associated with a Chinese traditional medicine center in Jiangxi province. The government released this information on its web site.

In response to an information request from Zhang, the Guangxi Forestry Department sent copies of the licenses held by these organizations for handling pangolins. The reason for transferring pangolins remains unclear.

“We want the wildlife center to provide a full explanation,” Zhang said. “We know the trade in pangolins is very lucrative. The public should be able to know what happens.”

“China has a rather complete set of environmental laws,” said Barbara Finamore, the senior strategic director for Asia at the Natural Resources Defense Council in Washington, DC. “But environmental laws are not worth the paper they’re written on unless there’s also strong enforcement and oversight.”

Countries large and small, rich and poor, have passed extensive green legislation since the Rio Earth Summit in 1992. “The world has made incredible progress in adopting environmental laws and environmental impact assessments, in creating environmental ministries and agencies,” said Bruch, co-author of the U.N. report.

“The legal framework is there in an enormous number of countries,” said Deborah Seligsohn, a political scientist focusing on environmental policy at Villanova University. “But once you have all these laws, you need trained and willing personnel to actually enforce them. You need boots on the ground.”

Green mandates often go unfunded, said Barney Long, director of species conservation at Global Wildlife Conservation, a nonprofit group in Austin, Texas. “Many countries have laws stating the minimum number of park rangers that should be patrolling per square mile in national parks and protected areas. But these aren’t implemented if sufficient money isn’t appropriated.”

Non-governmental groups — like the biodiversity nonprofit in Beijing — try to help close the gap between environmental laws and enforcement action. But in many countries, this is dangerous work. In 2017, at least 207 environmental defenders — including forest rangers, advocates, journalists, and inspectors — were murdered for performing such work, according to Global Witness, a research and advocacy group based in Washington, D.C. and London.

There are some bright spots, experts say.

China is gradually releasing more environmental data to the public, especially on air pollution, even as the government clamps down on other forms of information. And more officials are being held accountable, said Jennifer Turner, director of the Woodrow Wilson Center’s China Environment Forum in Washington, D.C. “Before local officials were only evaluated on economic performance — but now it’s harder to hide from environmental sins.”  /muf