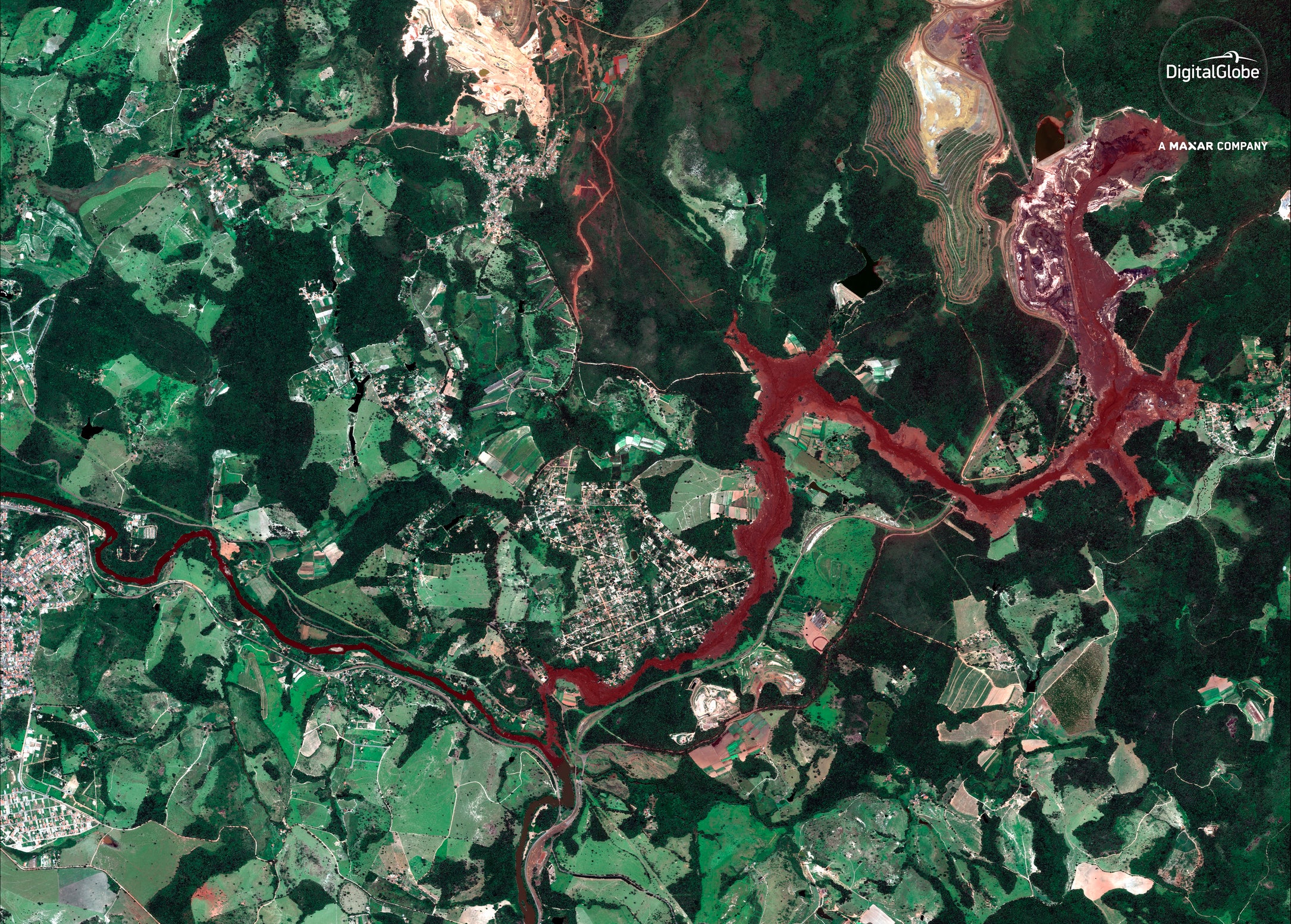 This Jan. 29, 2019 satellite image provided by DigitalGlobe shows mud flooding an area days after a mining company’s dam collapsed on Jan. 25, near Brumadinho, Brazil. As search-and-recovery efforts continued, authorities also worked to slow the reddish-brown mud that was heading down a small river with high concentrations of iron oxide, threatening to contaminate a much larger waterway that provides drinking water to communities in five of the country’s 26 states. (DigitalGlobe, a Maxar company via AP)

BRUMADINHO, Brazil — A Brazilian environmental group began testing river water Thursday around where a dam holding back mine waste collapsed to measure the level of toxicity and assess risks to human and other forms of life.

The dam failure unleashed a surge of mud that buried buildings adjoining the dam and several parts of the nearby city of Brumadinho. Authorities said Thursday a total of 110 bodies had been recovered and 238 are listed as missing.

Vale SA, the giant Brazilian company that owned and operated the iron ore mine, has said the torrent of reddish-brown mud unleashed Friday did not have dangerous levels of metals.

In a statement sent to The Associated Press, Vale said it was carrying out its own water quality tests. The first tests were made on Jan. 25 and Jan. 26 but the company said it did not have the results yet.

Environmental groups and state and federal authorities believe there could be risks.

SOS Mata Atlantica made the first of several tests about a half mile (one kilometer) from where the dam failed near the town of from Brumadinho. Preliminary results in that stretch of the Paraopeba River showed a low level of oxygen in the water and high levels of nitrate and phosphate.

The group used a protocol that looks at 14 different parameters, developed in the 1970s by the National Sanitation Foundation, an independent U.S. water testing organization. Within the hour, experts on the ground learned that the water grade of this segment of the river had gone from more than 40 points, or “Good”, down to 23.8 points, which according to the index is “Bad”.

“There could be some fish (still alive), but only a few species could survive these conditions,” said Thiago Felix, a biologist with the group.

Earlier this week, dead fish were seen floating along the river several miles from the breached dam. Members of an indigenous community said they were told not to use the water or fish in it.

Even if the tests don’t ultimately show dangerous levels of toxicity, experts say that high levels of iron rust and aluminum could alter the structure of the river bottom, harming the river’s ecosystem.

“Heavy metal, iron oxide … They might exist in nature, but in excess they are toxic. Everybody knows that,” said Joao Paulo Machado Torres, a professor who heads the Environmental Biophysics program at the Federal University of Rio de Janeiro.

The Paraopeba flows into the much larger Sao Francisco River. Hundreds of municipalities and larger cities such as Petrolina, 1,400 kilometers (870 miles) from Brumadinho, get drinking water from the Sao Francisco.

The tests by the environmental group came a day after state and federal authorities told residents to refrain from using water directly from the river or 100-meters (109 yards) around it.

The instructions were based on initial results from tests on the water, which have not been released. The agencies also said firefighters who have been in contact with the mine waste, called tailings, should take safety precautions.

SOS Mata Atlantica was among the environmental groups and academics that studied the impact of another dam rupture in 2015 in the city of Mariana, which like Brumadinho is in Minas Gerais state in southeastern Brazil.

The collapse of the much larger reservoir, jointly operated by Vale and BHP Billiton, killed 19 people and thousands of fish and left 250,000 people without drinking water.

Three years later, water in the Doce River is still unfit for consumption, environmental experts say, as small residues of iron oxide have fallen at the bottom of the riverbed and are brought up to the surface each time it rains heavily.

SOS Mata Atlantica and other experts who studied the Mariana disaster say the similarities between the dam failures are very strong.

“Even if they remove most of the mud, of this toxic waste, residues will remain for a long time, maintaining the river’s level of contamination, and compromising the return of life,” said Carlos Ritt with Observatorio do Clima, a network of 43 environmental groups in Brazil.

Local civil society groups say this is no accident and that mining giant Vale should be prosecuted.

“We’re denouncing, publicly, that this is not a tragedy, this is absolutely one of the biggest environmental crimes we’ve ever had,” said Marcus Vinicius Polignano, from a civil society group that represent the interests of water usage in the region.

Brazilian authorities arrested five people Tuesday in connection with the dam failure, three of whom worked with Vale. The two others were employees of TUEV Sued, a German company that inspected the dam.

Vale’s CEO Fabio Schvartsman said today that he had “no reason to fear for the arrest of any Vale executive.”

In Brumadinho, firefighters have not found a victim alive since Saturday. An Israeli search-and-rescue delegation sent to help look for survivors around the dam was leaving today.  /muf