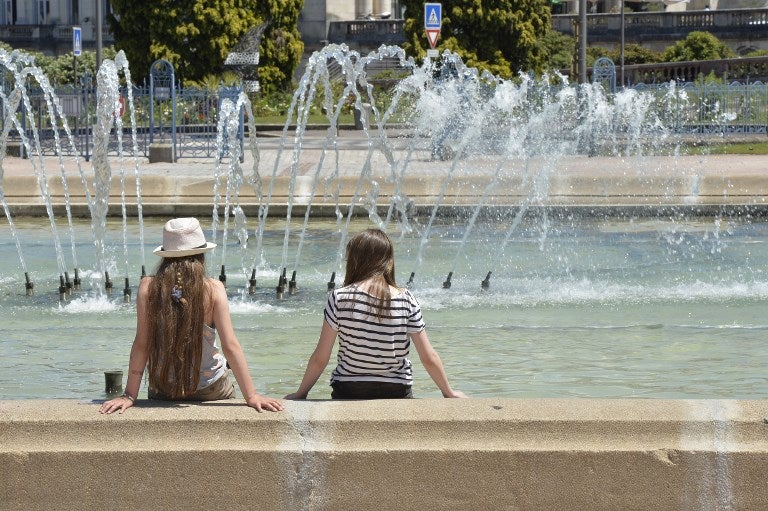 Teenagers freshen up in a public fountain, on June 30, 2015, in Limoges, France. In Austria, researchers have found a substance in the Ashitaba plant that some helps clean up cells and result in slower aging and a more youthful look. AFP FILE

TOKYO, Japan – In Japan, the slightly bitter leaves of the Ashitaba plant have long been considered healthy, and a new study has found the traditional belief may have good scientific grounds.

A natural substance in the plant appears to induce a key process that helps remove the “cellular garbage” that can build up as cells age and cause a range of diseases and disorders.

“It is always nice to find a scientific rationale for traditional medical folk tales,” said Frank Madeo, a professor at the University of Graz’s Institute of Molecular Biosciences, in Austria.

Madeo, who helped lead the research, said the substance known as 4,4′-dimethoxychalcone or DMC, which occurs naturally in Ashitaba plants, induces a process called autophagy.

“This is a cleansing and recycling process,” he told AFP. It removes “superfluous material, especially cellular garbage like aggregated proteins.”

That “cleaning” process is key to sustained good health as the body ages. When cells fail to promptly and efficiently remove damaged parts, they can build up and that can lead to diseases including cancer.

There are already a handful of compounds known to scientists that work to stimulate the cleaning process. Fasting also appears to naturally encourage cells to undertake spring cleaning.

But in a bid to expand the field of compounds able to protect cells and turn back the hands of time, the team of researchers turned to a class of substances called flavonoids.

Many flavonoids have already been shown to have a range of beneficial effects, ranging from anti-inflammatory properties to protecting against brain degeneration and cancer.

The team reasoned that they might find flavonoids that could also help prevent destructive aging in cells.

They screened 180 compounds representing various subcategories of flavonoids, looking for candidates that might have the natural ability to “counteract age-related cell demise.”

After initial screening, they settled on DMC and started by testing how the substance affected yeast cells.

They discovered it was indeed helping to protect the yeast cells from the effects of aging, and that the substance performed as well or even better than some existing compounds prized for their cell-protective capacity like resveratrol, which occurs in grape skin, among other places.

The team then tested DMC’s effect on cells in both worms and fruit flies — common test subjects in medical research.

Additional tests showed the compound helped protect cells in mice hearts through the autophagy process, and even protected against a kind of liver damage caused by ethanol intoxication.

The team also tested DMC’s effect on several types of human cells and found that there too the substance worked to slow aging.

“The experiments indicate that the effects of DMC might be transferable to humans, although we have to be cautious and wait for real clinical trials,” said Madeo.

The research is still in the early stages and Madeo said next steps will include testing whether the positive effects of DMC in mice hearts extend more broadly to protect mice against aging and age-related diseases.

“Eventually, clinical trials on humans are needed,” he added. /cbb