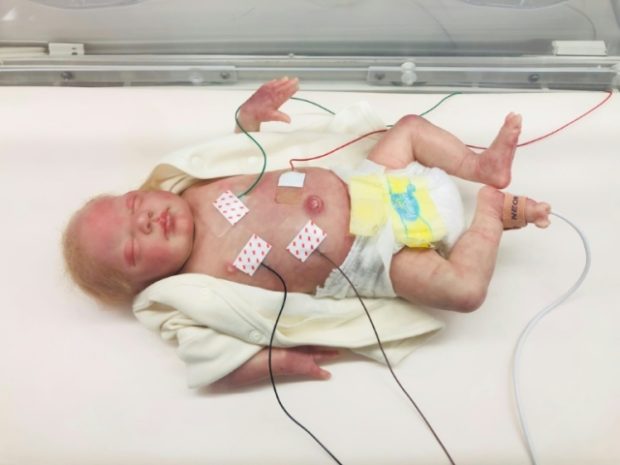 Parents of premature babies who spent time in neonatal intensive care units (NICUs) remember all too well the burdensome vital sign sensors stuck on the infants’ tiny bodies — linking them through a mess of wires to monitoring equipment.

An innovation in sensor technology by a team of US engineers and doctors could make it far easier for parents to cuddle their babies in the NICU — a simple gesture with major health benefits for the children.

The researchers who developed new ultra-light silicone sensors that are flexible and wireless have unveiled their invention in Friday’s edition of the journal Science.

In a traditional set-up, five electrodes and sensors are placed on a baby to monitor heartbeats, breathing, temperature and oxygen in the blood.

But here, the researchers created sensors just two and 0.8 inches (five and two centimeters) long for the chest and the foot that operate without batteries and use a water-based adhesive gel that is 10 times lighter than the standard fare.

A minuscule antenna sends data to a transmitter under the incubator and transfers power.

The sensors used in today’s incubators are basically the same those used in the 1960s, said John Rogers, professor and director of the Center for Bio-Integrated Electronics at Northwestern University.

Around 2016, his team — which specializes in integrating electronic components in the human body — started working with pediatricians in the neonatal service at Lurie Children’s Hospital in Chicago.

“We were drawn to the neonatal health monitoring area, because we felt like our devices would add maximum value in that context,” Rogers told AFP.

“Premature babies are at a fragile health status, they require a lot of monitoring, and at the same time, their skin is underdeveloped — it’s very sensitive, it’s easily damaged and disrupted.”

The researchers compared the quality of the data transmitted by their system to the data yielded by the traditional one for 80 babies so far — and results showed the technology was just as precise.

Now, they need to secure approval from the US Food and Drug Administration, which likely won’t come until next year, according to Rogers.

“This is a phenomenal breakthrough,” said Kelli Kelley, who had two premature children, including a boy who weighed only about 1.5 pounds (700 grams) at birth and stayed in intensive care for four months.

“It is very very difficult to feed your baby so tiny and small and hooked up to so many machines. It causes a barrier in being able to hold and bond with a medically fragile child,” said Kelley, who founded the family support group Hand to Hold.

Her son is now 18. But she said one of his nipples was damaged so severely by the sensors’ adhesives that a portion had to be removed.

A premature baby born after a 24-week gestation period has skin 40 percent thinner than a full-term child. Many premature babies grow up with scars from the sensors.

Current adhesives need to be resistant to the powerful tension exerted on the wires that are pulled as soon as the baby moves, is held or changed.

Wireless sensors avoid that problem entirely. They can even adhere to the skin naturally without an adhesive, even though a hydrogel 10 times weaker than conventional ones was used in the study.

In American hospitals, doctors strongly recommend skin-to-skin contact between parents and their children, but with all the wires in conventional incubators, it is challenging to sit comfortably with the baby in your arms, and movements are confined to the immediate proximity of the incubator.

“We know that skin-to-skin contact is so important for newborns — especially those who are sick or premature,” Amy Paller, a pediatric dermatologist at Lurie Children’s, said in a statement.

“It’s been shown to decrease the risk of pulmonary complications, liver issues and infections.”

The new sensors are still being tested in Chicago.

They will be distributed in a pilot program in Zambia starting in April, followed by similar initiatives in India and Pakistan thanks to support from the Bill & Melinda Gates Foundation and Save the Children.

The sensors will even include an accelerometer to track the baby’s movements.

“You can study how the baby’s vital signs change when it’s being held, and you can really quantify all of those things, how the heart rate is modulated by mother-child interaction,” said Rogers. CC