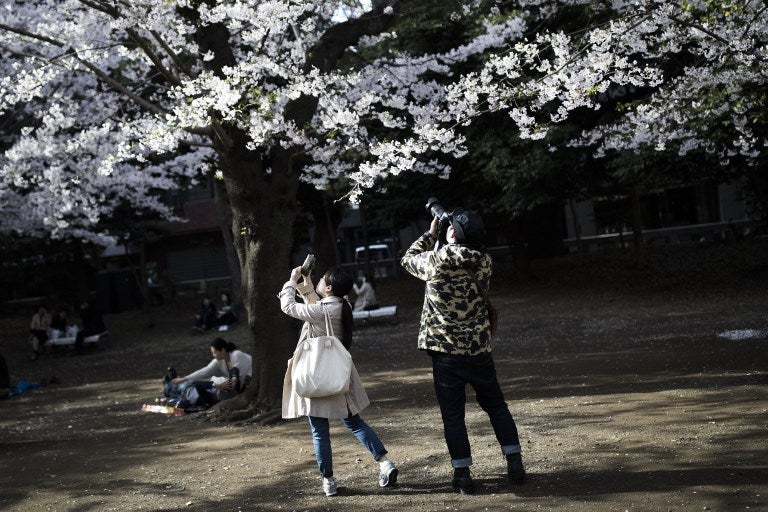 Visitors take pictures of cherry blossoms at Yasukuni Shrine in Tokyo on April 7, 2017. – Japan’s cherry blossom season kicks off boozy parties across the country and draws tourists from far and wide. (Photo by Behrouz MEHRI / AFP)

Who can more accurately predict when Japan’s cherry trees will bloom, artificial intelligence or humans? Shimadzu Business Systems Corp., a Kyoto-based subsidiary of Shimadzu Corp., started a unique competition between the two sides.

As of March 1, both human and AI prognosticators were calling for the flowers to appear earlier than in an average year nationwide. But in some locations, the expectations differ by a few days. The results of the competition will be announced on April 5 on the company’s Otenki Japan weather forecast website.

In the company, human weather forecasters had predicted the blooming dates until 2017, but in 2018 AI replaced them for the first time. However, its 2018 predictions came within two days of the actual blooming dates for only 31 percent of 45 locations in the country.

The hit rate of the AI predictions is lower than that of predictions by Hisashi Kataoka. Kataoka, 41, is the company’s group leader and has worked as a weather forecaster for 17 years. His average hit rate was 37 percent from 2010 to 2017.

So, the company gave its AI additional information about cherry blossoms’ cycle of being dormant in autumn and winter and developing flower buds in early spring, and about changing weather patterns, such as temperature data. As a result, the rate improved to 60 percent in a simulation based on last year’s blossoming dates.

Kataoka said: “I held a 63 percent hit record in the past. I’m looking forward to the results.”