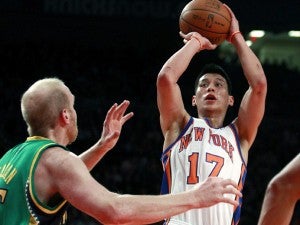 New York Knicks' Jeremy Lin (17) shoots against the New Orleans Hornets during the first half of an NBA basketball game on Friday, Feb. 17, 2012, in New York. (AP Photo/Frank Franklin II)

The NBA’s newest star, Jeremy Lin, is not just a phenomenon on court. He’s one online too.

The New York Knicks’ point guard has been racking up Twitter followers, Facebook fans and YouTube views as fast as he has been scoring points and dishing out assists.

Google searches for his name are more popular in recent weeks than for sports royalty such as Kobe Bryant, Tiger Woods and David Beckham.

Lin’s Wikipedia biography has grown to over 5,000 words chronicling his unlikely and meteoric rise from undrafted and twice-discarded benchwarmer to stardom in Madison Square Garden, the world’s biggest basketball stage.

His dazzling run has spawned a multitude of Lin-inspired plays on words—“Linsanity,” “Lincredible,” etc.—and there’s an online Jeremy Lin Word Generator at Linwords.com for anyone in need of Linspiration.

Lin, 23, is the first US-born player in the NBA of Taiwanese and Chinese heritage and he has already developed a devoted following among many Asian-Americans and in China, Taiwan, the Philippines and other countries.

A search for “Jeremy Lin” on online auction house eBay turns up more than 15,000 Lin-related items, from “Linsanity” T-shirts for as little as $8.99 to a trading card from his rookie year with the Golden State Warriors for $68,888.

The uniform Lin wore for his first game with the Knicks, in which he played just one minute and 27 seconds and missed his only shot, sold on eBay for $40,000 this week.

According to the NBA, Lin’s No. 17 Knicks jersey has been the top-selling shirt online since he came off the bench against the New York Nets on Feb. 4 to score 25 points and earn a spot in the starting rotation.

The NBA said NBAStore.com has shipped Lin merchandise to 23 countries since his breakout game with Taiwan, Hong Kong and Australia ranking third, fourth and fifth on the list after the United States and Canada.

Traffic to the NYKnicks.com website between Feb. 5 and Feb. 12 was 550-percent higher than during the previous week as basketball fans from around the world searched for Lin news and video highlights.

It’s not just videos of the 38 points Lin dropped on the Los Angeles Lakers or his emphatic dunk against the Washington Wizards that are attracting views, although they’ve each been watched millions of times.

Goofy comedy videos made by Lin before he became a household name have been drawing attention to his previously little-known YouTube channel, TheJlin7.

One of the videos, entitled “How to Get into Harvard,” Lin’s alma mater, has been viewed 1.7 million times. It has Lin providing tongue-in-cheek advice to Harvard applicants such as “If you already have glasses, get bigger glasses.”

Filmed during the lockout that delayed the start of this year’s NBA season Lin opens the video by explaining that he is making it because “I have no life and no job.”

Lin’s Facebook page has nearly 700,000 fans and features a status update from early January which epitomizes just how obscure he was before beginning his magical streak.

“Every time I try to get into Madison Square Garden, the security guards ask me if I’m a trainer,” Lin said, ending the message with “LOL,” the acronym for “laughing out loud.”

No ‘demand’ for Pacquiao-McGregor after UFC star’s shock loss

Medico-legal report: Dacera’s death due to natural cause; rules out rape, homicide

Changes to tongue, hands or feet may flag coronavirus—study