Back to the future: cassettes launch comeback tour 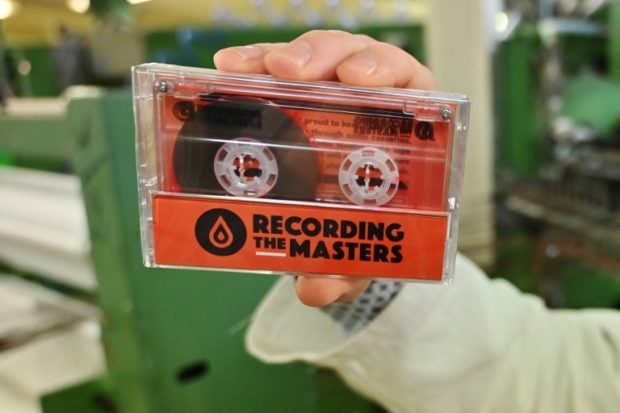 A man holds an audio cassette made with magnetic stripes in the production plant of Mulann, in Avranches, northwestern France on March 14, 2019.  AFP

NEW YORK, United States — The humble cassette — that tiny little plastic rectangle containing the homemade mixtapes of yesteryear — is back, joining vinyl as a darling of audiophiles who miss side A and side B.

But as top musicians including Ariana Grande and Justin Bieber release their music on tape and demand continues to climb, the niche revival has faced a global shortage of music-quality magnetic tape needed for production.

Now, two facilities — one in the American Midwest and the other in western France — have stepped in to meet the need.

“It’s a good place to be — there’s plenty of business for both of us,” said Steve Stepp, who founded the National Audio Company in Springfield, Missouri with his father 50 years ago.

He said that around 2000 the “imperial hegemony of the CD” cut his business, which stayed alive as a major manufacturer of books on tape that remained popular.

But despite the astronomical rise of streaming, Stepp said rock bands like Pearl Jam and The Smashing Pumpkins began seeking to manufacture anniversary tapes in the mid-2000s, launching a cassette comeback tour.

“That convinced major record labels that there was still life in the cassette as a music form,” he said.
Several years ago National Audio bought 300,000 reels of tape from a South Korean company that gave up music-grade tape production.

As that stockpile began to shrink, his facility in November 2016 was faced with a choice: either make reels, or fold.
His business invested several million dollars buying up old equipment from defunct production facilities, and last year National Audio manufactured 18 million audio cassettes, Stepp said, selling to 3,500 record labels globally.

“I think it’s got a bright future,” Stepp told AFP of the cassette market. “It died in 2000, as far as conventional wisdom was concerned, and it has made a strong comeback since.”

“Reports of its death were greatly exaggerated.”

“Take the example of heating: you have radiators at home. It’s comfortable, it’s digital — but next to you, you can make a good fire.”

“Pleasure” is the goal, he said: “That’s the cassette or vinyl.”

The company sells tapes for 3.49 euros each, producing them by the thousands each month and exporting 95 percent worldwide, according to commercial director Theo Gardin.

The 27-year-old admits he didn’t know in his youth the joys — and pains — of the Walkman personal tape player, or the delicate strip of tape that tangles up and must be rewound with, say, a pen. Or a finger.

According to Stepp, it’s precisely 20-somethings like Gardin fast-forwarding demand, as young people seek something tangible in the internet age.

Urban Outfitters — an American clothing brand catering to hipster types that also sells electronics — on its site spells out the mixtape process.

“If you’ve never spent 3-5 hours sitting by the radio, waiting for that one Hanson song to come on so you could add it to your mixtape, get pumped: you can now relive that experience,” it says.

It’s nothing compared to 1994 sales of 246 million cassette albums, but significant considering the format was all but dead by the mid 2000s.

“As an old fogey I don’t want to imagine a world with no analog,” Stepp said. “The world around is analog; our ears are analog.”

“Digital recordings are very clean and sharp but there are no harmonics. These are digital pictures of audio recordings, if you will.”

Bobby May, a 29-year-old buyer at Burger Records in southern California, said that while “physical media in itself is a totally antiquated idea,” cassette sound has what he called a uniqueness.

“The consumer public is fickle and trends always change, but for the foreseeable future, I know tons of people will stay pretty crazy for records and vinyl.”

Though vinyl’s sound quality is unquestionably superior to cassettes, May said tapes’ low cost makes them ideal for collectors.

“I still like stuff pilin’ up around me,” May laughed, adding that he probably has 500 tapes from Burger.

In addition to the homemade and indie cassettes, he cherishes several mainstream albums as well.

“I have a prized ‘Baby One More Time’ cassette,” he said, referring to pop princess Britney Spears’ debut album. “It looks great on my shelf.” /ee