Indian teen dies after tapeworm cysts found in his brain 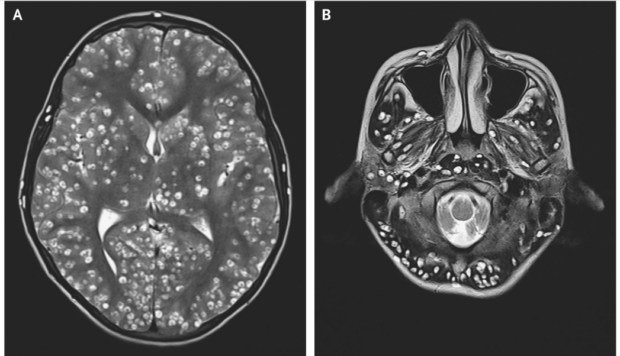 An 18-year-old teenager in Faridabad, India, died from a rare case, involving tapeworm cysts that were found inside his brain.

The unidentified teen was first taken to the emergency room of a hospital due to generalized tonic-clonic seizures, according to a case study released by The New England Journal of Medicine on Thursday.

The teen’s parents told doctors that he had been suffering pain in the groin for a week. When brought for physical examination, the patient was confused and had swelling in his right eye and tenderness in the right testis.

A magnetic resonance imaging (MRI) scan showed that he had numerous well-defined cystic lesions throughout his brain.

The lesions were consistent with neurocysticercosis, which is defined by the World Health Organization as a “parasitic infection of the central nervous system and is caused by the pork tapeworm Taenia solium.” Humans may be infected by this after eating undercooked food, particularly pork or water contaminated with tapeworm eggs.

It was also found that the teen had well-defined cysts upon ultrasonography of the infected eye and right testis.

Treatment with antiparasitic medications was not recommended in the teen’s case, as it could worsen inflammation and cerebral edema. Since the teen had ocular lesions, treatment with such medications could also cause loss of vision.

The patient died at the hospital two weeks later, despite being treated with dexamethasone and antiepileptic medications.

This was not the first time a tapeworm was found in someone’s brain. In September 2018, doctors removed a live 10-centimeter tapeworm from a Chinese man’s brain following epileptic fits.  /ra

2.8m-long tapeworm found in patient who had no symptoms