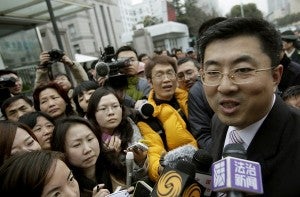 WHO OWNS IPAD? Ma Dongxiao, right, an attorney for Shenzhen Proview Technology, speaks to journalists after a premlinary hearing at a courthouse Wednesday, Feb. 22, 2012, in Shanghai, China. The Chinese company fighting Apple Inc. over its use of the iPad trademark in China took its complaints to a Shanghai court Wednesday, though it says it is willing to talk about a settlement. (AP Photo/Eugene Hoshiko

SHANGHAI— Apple Inc. defended its right to use the iPad trademark in China in a heated court hearing Wednesday that pitted the electronics giant against a struggling Chinese electronics company that denies having sold the mainland China rights to the popular tablet computer’s name.

Shenzhen Proview Technology’s lawyer Xie Xianghui argued that the sale of the iPad trademark to an Apple subsidiary by Proview’s Taiwan affiliate in 2009 was invalid. Apple countered that Proview violated the sale contract by failing to transfer the trademark rights in mainland China.

It also contends that the Chinese LCD maker has not marketed or sold its own “IPAD,” or Internet Personal Access Device for years, thus possibly invalidating its claim to the trademark.

The hearing adjourned after a fractious four-hour session which saw the judge repeatedly admonishing both sides to observe proper court protocol as they argued across the courtroom. No date was announced for a judgment or further hearings.

“Apple has no right to sell iPads under that name,” Xie said. “The agreement to sell the trademark is not valid under Chinese law.”

Proview is suing to have Apple stop selling the iPad in China under that name. It has also sought to have commercial authorities in many cities order sales to stop. Ma Xiaodong, another Proview lawyer, said after the hearing that the company plans to file lawsuits against Apple in other cities.

Apple’s lawyers demanded that Proview provide evidence that its product is actually marketed in China, contending that the heavily indebted Chinese company has no ability to produce the IPAD. They also demanded Proview provide guarantees it could pay compensation for any losses if the court were to halt iPad sales pending a final decision on ownership of the trademark. The Proview side said it could pay in cash.

Apple has appealed an earlier ruling against it in a court in Shenzhen, a city in southern China’s Guangdong province. The Guangdong High Court is due to hear that case on Feb. 29.

Earlier, Xie said that since no final decisions have been reached in various legal disputes over the issue, both sides were “still able to sit together and reach an out-of-court settlement.” Apple has shown no indication of willingness to settle.

The trademark case is highlighting mixed attitudes toward Apple in China. Chinese are just as crazy about iPads and iPhones as consumers anywhere else and the devices are manufactured in China, employing hundreds of thousands of people.

But public awareness has been growing of criticism over the labor and environmental practices of huge factories that assemble the devices. Taiwan’s Foxconn Technology Group, which makes iPads in China, has been under intense scrutiny after a spate of worker suicides. It recently raised wages by up to 25 percent in the second major salary hike in less than two years.

Apple, based in Cupertino, California, insists it holds the trademark rights to the iPad in China, having purchased them from Proview for 35,000 British pounds ($55,000) through a company set up for that purpose.

A court in Hong Kong, which has a separate legal system from mainland China, ruled in July that Proview had acted with the intention of “injuring Apple.” Proview’s lawyers argued Wednesday that any rulings in Hong Kong were not admissable in Chinese courts.

So far, iPads have been pulled from shelves in some Chinese cities but there has been no sign of action at the national level.