Samsung announces Galaxy A80 with sliding and rotating camera 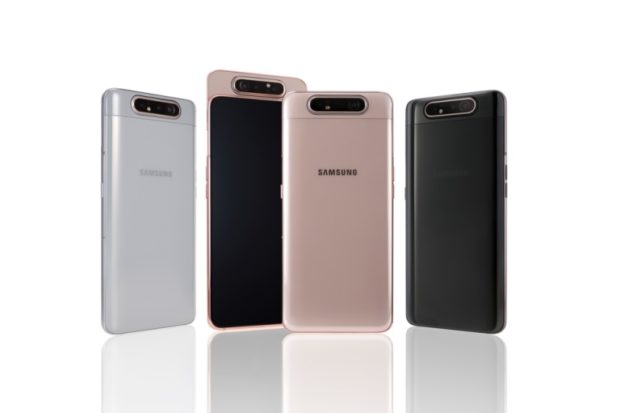 The new Samsung Galaxy A80 will be launch on May 29. Image: Courtesy of Samsung via AFP Relaxnews

Samsung has unveiled the mid-range Galaxy A80 whose shining feature is a slide-up camera mechanism that can also rotate the set of three lenses to the front of the device.

The Galaxy A80, which was announced on Wednesday, is designed for 2019 — a time period that falls between the “era of the selfie” and the “era of live.” To capture both types of moments, the company equipped this model with its first rotating camera.

When a user activates selfie mode within the native camera app, the three rear cameras slide up via a mechanism similar to Oppo’s Find X and then rotate towards the front. This allows for selfies to be just as high quality as the pictures taken from the back.

The 48-megapixel main camera has been optimized to capture vivid pictures both in bright and dark settings. The second and third lenses, a three-dimensional depth lens and an ultra-wide angle lens, help users take well-focused shots with less panning. Furthermore, the device comes with a Super Steady video mode that reduces shaking to create “smooth, pro-level action videos.”

Thanks to the camera lenses being able to position themselves on the back of the device, there is no need for a notch. As a result, this 6.7-inch Full High Definition Plus (FHD+) Super AMOLED screen earns the New Infinity Display denotation, which was revealed for the first time earlier this year at the Samsung Developer Conference.

The intelligent battery learns your daily routine and adjusts the usage based on your activity. This allows the phone to work more efficiently and launch apps more quickly when you need them.

The Galaxy A80 launches on May 29. As of right now, no price has been announced. CE/NVG