NOAA: Bryde’s whales in Gulf of Mexico are endangered 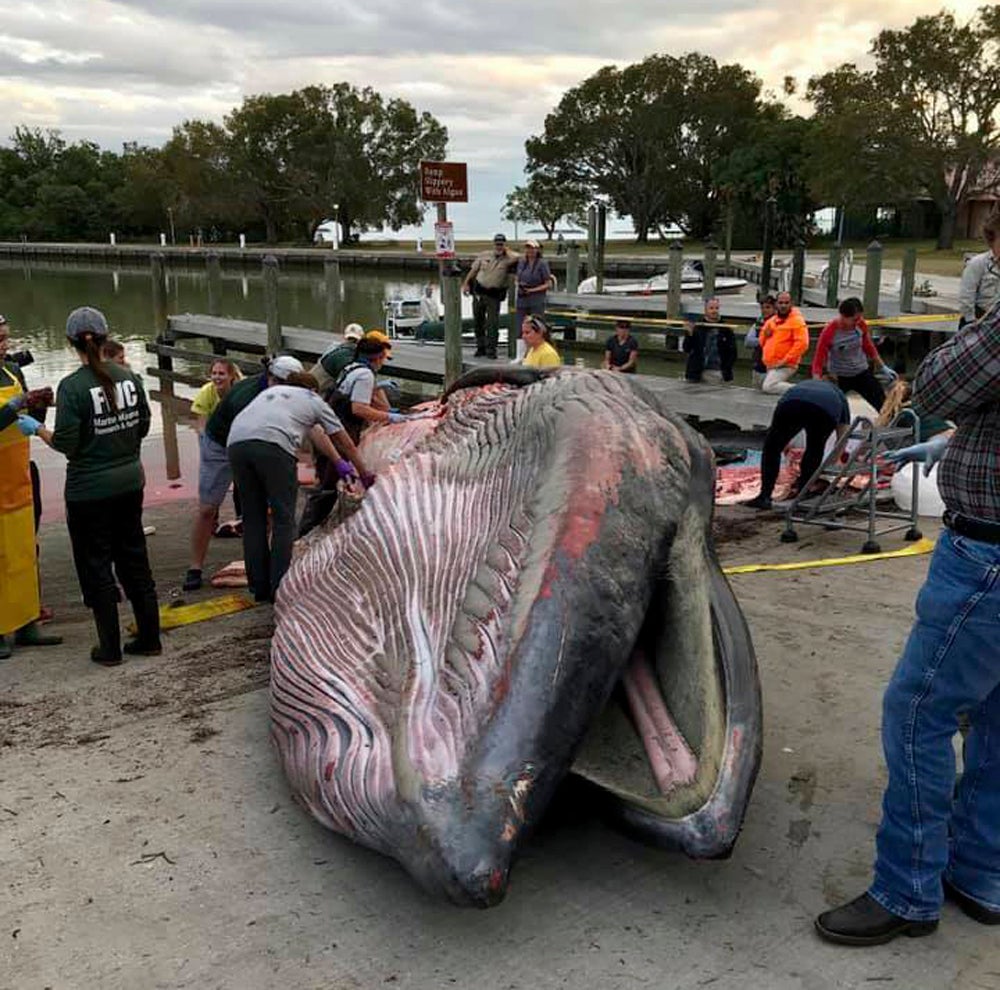 This 2018 photo provided by the National Park Service shows, scientists perform a necropsy on Bryde’s whale that was stranded in the Florida Everglades National Park. Federal scientists say a tiny group of Bryde’s whales in the Gulf of Mexico is endangered, with threats including oil and gas exploration and development. Laura Engleby, a marine mammal biologist with the National Oceanic and Atmospheric Administration fisheries’ service, said Friday, April 12, 2019, that there may be as few as 23 in the Gulf’s DeSoto Canyon. (National Park Service via AP)

NEW ORLEANS — Federal scientists say a tiny group of Bryde’s whales in the Gulf of Mexico is endangered, facing threats including oil and gas exploration and development.

“They’re the only year-round baleen whales that make their home in Gulf of Mexico, and (they) have a unique and very important role in the ecosystem,” said Laura Engleby, a marine mammal biologist with the National Oceanic and Atmospheric Administration fisheries’ service.

Two other subspecies are found in tropical waters around the world, but this one is so genetically different it may even be a different species, Engleby said. The filter-feeding whales known as baleen whales can be hard to tell apart by sight, she said. “That makes it even more challenging to study them, in some ways,” she said.

A Republican congressman from Florida and a marine mammal scientist in Massachusetts applauded the decision to protect the whales. There probably are about 33 of them in a deepwater area called the DeSoto Canyon, Engleby said. If there are any in the southern Gulf, she said, the total including the known population is probably less than 100.

“Although belated, this designation will help to protect this vulnerable species and aid in its recovery,” U.S. Rep. Vern Buchanan said in an emailed statement. Buchanan and Rep. Kathy Castor, D-Florida, had pushed for the designation, Buchanan spokesman Anthony Cruz wrote.

“I think it’s a great thing to declare them endangered. It’s been coming for a while,” said Scott Kraus, chief marine mammal scientist at the New England Aquarium’s Anderson Cabot Center for Ocean Life.

However, “It’s absolutely not too late” to save the whale, said Zac Smith, attorney for the National Resources Defense Council, an environmental group that sued the government in 2014 to get the endangered listing. “This species now has a fighting chance for survival and to rebound from the brink of extinction.”

Engleby said the next step is to work out ways to help the whales recover, including consulting with other agencies and considering whether to designate critical habitat.

Such a designation would require NOAA Fisheries consultation about any federal contracts, which include oil and gas leases in federal waters.

Threats include noise from seismic surveys for oil and gas and ship traffic, which interfere with their subsonic communication.

Oil and gas companies agreed in 2013 not to use seismic surveys in an area including the DeSoto Canyon. That agreement, originally for 2½ years, has been extended and will remain in effect until 2022, NOAA Fisheries spokeswoman Kim Amendola said.

A study released in 2015 estimated the whales’ numbers at 26. It said the BP offshore oil spill in 2010 overlapped nearly half their habitat and might have killed up to 22 percent of the population. Other threats include fishing nets, oil and gas development, pollution, and even being hit by ships — a whale was hit and killed by a ship in 2009.

It arrived in Tampa, Florida, “on the bow of a ship,” Engleby said. Since it was lactating, she noted, the calf probably died, too.

The name is pronounced “BROO-duhs” because they were named after the 19th century Norwegian whaler Johan Bryde.

Whalers’ records dating back to the 1700s show they once swam in the central and northern gulf, according to NOAA Fisheries. They eat crustaceans, fish and cephalopods, which they filter through baleen plates and bristles.

Because they were confined to the Gulf of Mexico, they probably never were as numerous as some other species, said Smith.

Engleby said, “We don’t really know much about this species.”  She said a study funded with money from penalties that energy giant BP PLC and others paid after the oil spill is using visual surveys, passive acoustic monitoring and tagging to learn more, including their part in the ecosystem.  /muf