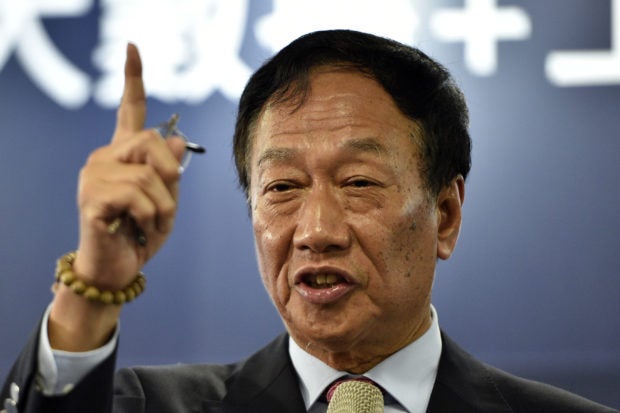 This file photo taken on June 22, 2017 shows Terry Gou, chairman of Taiwan’s Foxconn, gesturing during a press conference in New Taipei City. – The boss of tech giant Foxconn on April 17, 2019 announced his intention to run for the presidency of Taiwan on a ticket from the Beijing-friendly opposition Kuomintang (KMT) party. AFP FILE PHOTO

TAIPEI — The boss of tech giant Foxconn said Wednesday he will be running for president of Taiwan — after securing the backing of a local Sea Goddess.

Terry Gou, who announced this week he was stepping back from frontline operations at the Apple supplier, said he would seek the nomination of the Beijing-friendly Kuomintang (KMT) opposition party.

“I am willing to join the party’s primary. If I win I will represent the KMT in the 2020 elections,” he said at a KMT meeting in Taipei.

Guo also said he would “fully support” the party’s candidate if he failed to secure the nomination.

Earlier Wednesday while visiting a temple of local sea goddess Matsu in New Taipei city, the 69-year-old said the goddess “told me to step forward … to help the people.”

Gou is expected to face KMT heavyweights including former party chairman Eric Chu and former parliamentary speaker Wang Jin-pyng, who have announced their intentions to run for president.

Tsai, 62, has said she will seek re-election in the January 11 polls. She faces a challenge from pro-independence former premier William Lai in the party’s primary.

The DPP is set to announce its presidential candidate later this month.

READ: From Corn to Apple: The Cases Behind the US-China Standoff

Known for his aggressive dealmaking, Gou has been snapping up investments from Japan to India in a bid to diversify from electronics assembly.

Gou was born in 1950 in Taipei to parents who had fled the Communist victory in China’s civil war. He studied shipping management in college while supporting himself with part-time jobs.

He started his business in 1974 making television parts with an investment of Tw$100,000 ($3,250 at current exchange rates) from his mother, and later began producing computer parts — eventually growing to become the world’s biggest contract electronics maker.