Musk, SEC get another week to reach deal in contempt case 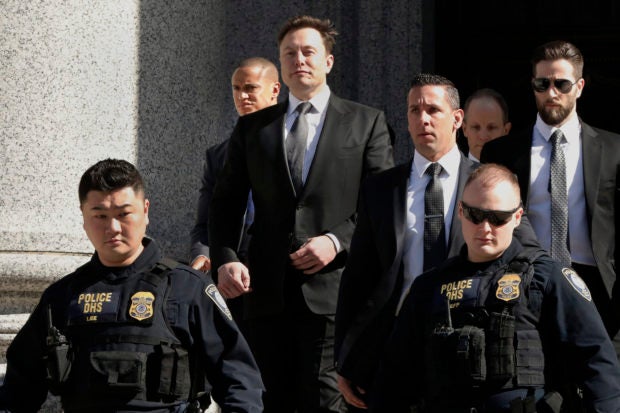 In this April 4, 2019, file photo, Tesla CEO Elon Musk leaves Manhattan Federal Court, in New York. In a letter filed on Thursday, April 18, 2019, lawyers for Musk and the U.S. government asked for another week to negotiate a deal to keep Musk from being found in contempt of court. AP FILE PHOTO

NEW YORK — Lawyers for Tesla CEO Elon Musk and U.S. securities regulators are getting another week to negotiate a deal to keep Musk from being found in contempt of court.

Both sides say in a letter filed Thursday with a federal court in New York that they talked for over an hour this week and are continuing to discuss an agreement. District Judge Alison Nathan granted the request to talk until April 25.

Lawyers for the Securities and Exchange Commission asked the court to find Musk in contempt for violating a settlement order that requires Musk’s tweets to be approved by a lawyer if they disclose important company facts.

Nathan had ordered both sides to meet and work out differences by Thursday.

The settlement was reached last year after Musk tweeted he had secured funding to take Tesla private even though he had not. The SEC says Musk violated that agreement when he tweeted about vehicle production without approval in February.

Nathan had ordered both sides to meet for at least an hour to work out their differences and if they couldn’t, she would rule on whether to hold Musk in contempt.

The settlement was reached last October after Musk tweeted that he had secured funding to take Tesla private when in fact he had not. The tweet sent Tesla’s stock on a wild ride and the SEC says it harmed investors who bought shares after the tweet but before they had accurate information.

The SEC says Musk violated the agreement when he tweeted about vehicle production in February without approval.

The 13-word tweet said Tesla would produce around 500,000 vehicles this year. But it wasn’t approved by Tesla’s “disclosure counsel,” and the SEC said Musk had not sought a lawyer’s approval for a single tweet.

Musk argued the tweet didn’t need approval because it wasn’t new information that was meaningful to investors. His attorneys said the SEC was violating his First Amendment right to free speech.

Musk tweeted about vehicle production again on Sunday, writing that Tesla will make 500,000 cars in the next 12 months. The SEC did not respond to requests for comment on that tweet.