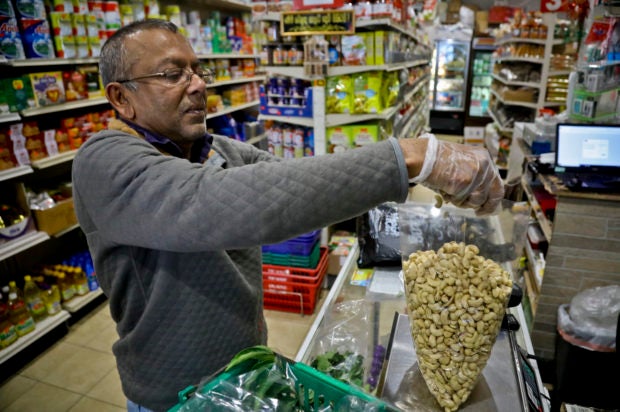 Dhannitha Meemanage, from Sri Lanka, bags cashews in his family’s grocery store, in New York’s Staten Island’s “Little Sri Lanka” community, Monday, April 22, 2019. Sri Lanka’s abrupt shutdown of social media sites in the wake of the string of deadly Easter Sunday terror attacks has left worried friends and relatives in places like “Little Sri Lanka” in the dark. Meemanage, turned to old-fashioned means of getting news about loved ones after the attack, a landline phone. AP

NEW YORK — Viji Devadas hasn’t heard from her nephew in Sri Lanka on her family WhatsApp chat group since he reached out just after the Easter Sunday bomb blasts that tore apart churches and hotels and killed hundreds in the South Asian nation.

It’s unsettling, but she knows he’s ok, and the Sri Lankan government’s decision to block most social media, citing concern over “false news reports,” makes sense to her.

In “one way, it’s good because so many rumors and so many things, everybody gets scared,” said Devadas, whose family runs a restaurant named after the Sri Lankan capital, Colombo, in a tiny strip of New York’s Staten Island borough known as “Little Sri Lanka.” At the same time, she hoped it wouldn’t be in place for long, since “people like to see what’s going on and happening.”

The block on social media including Facebook and its WhatsApp and Instagram services was announced by the Sri Lankan government’s official news portal, which cited the spread of misinformation online. The NetBlocks observatory said it detected an intentional blackout of the popular platforms, as well as YouTube, Snapchat and Viber. Twitter appeared unaffected.

Officials likely feared that the spread of inflammatory content could provoke more bloodshed in Sri Lanka, a Buddhist-majority island nation that has large Hindu, Muslim and Christian minorities and a long history of ethnic and sectarian conflict. At least 290 people were killed and 500 people injured in the bombings.

That made sense to Devadas. The government doesn’t “want to get new rumors, they don’t want to get riots,” she said.

James Moses agreed. “I think it’s a good thing, what they have done because … a lot of people give misinformation, and spread that which is not accurate,” said the Sri Lankan immigrant, who also lives on Staten Island. “I see sometimes hatred, violence … put up on social media. That’s not going to help anybody. That’s going to be really a mess.”

The decision by Sri Lankan authorities to flick the off switch on most social media after the attacks was a lightning fast reaction that also reflects accumulated distrust in the capability of American internet companies to control harmful content.

It wasn’t the first time Sri Lanka has blocked social media. The government imposed a weeklong ban in March 2018 because of concerns that WhatsApp and other platforms were being used to fan anti-Muslim violence in the country’s central region.

Decided it's better to write this up properly. Here it is with context: https://t.co/ydMwgH4WIR

“A few years ago we’d be using these platforms to help each other and coordinating assistance. Now we view them as a threat,” he wrote on Twitter.

“If I were Facebook and WhatsApp I’d take a moment to ask myself where I’d gone wrong,” he added. “Cannot think of a clearer signal for lack of platform trust.”

In the past, blocking social media would have been seen as “outrageous censorship,” Sigal said, highlighting the shift in attitudes toward social media sites. “Now we think of it as essential duty of care, to protect ourselves from threat.”

Sri Lanka’s defense ministry said the shutdown would extend until the government wraps up its investigation into the bomb blasts. Sri Lanka’s U.N. ambassador, Amrith Rohan Perera, said in a statement Monday that the blocks aim “to prevent speculative and mischievous attempts to spread rumors.” He also cautioned expatriates to use social media responsibly to support one another but not to inadvertently spread “panic and mistrust.”

NetBlocks, however, said post-attack blackouts can be ineffective.

“What we’ve seen is that when social media is shut down, it creates a vacuum of information that’s readily exploited by other parties,” said Alp Toker, executive director of the London-based group. “It can add to the sense of fear and can cause panic.”

“That’s going to be a problem for people trying to communicate with friends and family,” Toker said.

Some internet users are circumventing the social media blocks by using a virtual private network, which masks the location of a computer, Toker said. An analysis by Sri Lankan researcher and author Yudhanjaya Wijeratne of thousands of Facebook posts made during last year’s ban found that many Sri Lankans simply found ways around it.

Others, like Staten Island resident Dhannitha Meemanage, turned to old-fashioned means of getting news about loved ones after Sunday’s attack — a landline phone.

“Everything is shut down because of this problem,” he said as he bagged cashews in his family’s grocery story in Little Sri Lanka.