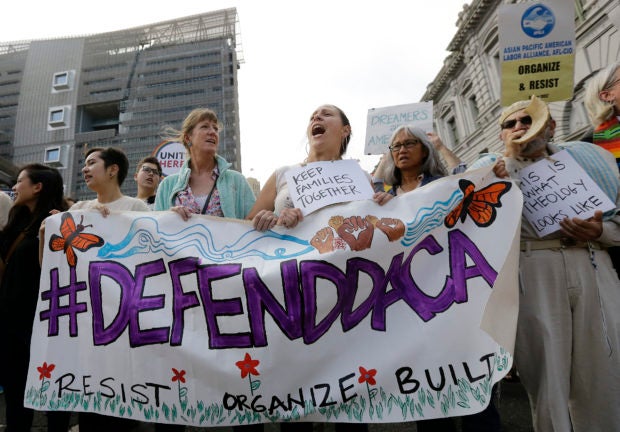 In this Sept. 5, 2017, file photo, supporters of the Deferred Action for Childhood Arrivals (DACA) yell during a protest in San Francisco. A participant in the federal program shielding young immigrants from deportation is suing VMware, a Silicon Valley company, saying she was denied a job she was qualified for despite being authorized to work in the U.S. AP FILE PHOTO

SAN FRANCISCO — A participant in the federal program shielding young immigrants from deportation is suing a Silicon Valley company, saying she was denied a job she was qualified for despite being authorized to work in the U.S.

The case is one of several filed recently against major U.S. corporations that allegedly refused to employ people enrolled in the federal program known as Deferred Action for Childhood Arrivals, or DACA. It allows immigrants brought illegally to the U.S. as children to remain in the country.

On Tuesday, the Mexican American Legal Defense and Education Fund sued VMware in federal court in California, saying the software company violated the Civil Rights Act when it denied Sandy Vasquez a job.

VMware, according to the lawsuit, refuses to hire people authorized to work in the U.S. unless they are citizens, permanent residents or have a “transferrable visa” such as one given to highly skilled workers. Vasquez and others enrolled in DACA, as well as other immigrants such as those with temporary protected status, do not fall into these categories.

Palo Alto, California-based VMware said that while it does not comment on active lawsuits, it “hires and continues to employ DACA recipients.”

“We also work with VMware employees who are DACA recipients, connecting them, at no cost, with our immigration provider and offering assistance as needed, while respecting their privacy around this issue,” the company said in a statement.

MALDEF has filed several lawsuits in recent years on behalf of DACA recipients who were denied jobs or internships.

Two have been settled and others are moving through the courts . Last year, a U.S. federal judge in Miami refused to dismiss a lawsuit filed by David Rodriguez against Proctor &amp; Gamble Co. Rodriguez’s application to work for the company was rejected because its policy states that workers “should be legally authorized to work with no restraints in the type, duration or location of employment,” according to court documents.

That case is still pending. Cases involving Bank of America and Northwestern Mutual Life Insurance have been settled.
“Every one of these defendants is a sophisticated Fortune 500 company,” said Thomas A. Saenz, the president and general counsel of MALDEF. “These are employers who had access to some of the most expensive lawyering available.”
Saenz added that it’s hard to conclude that the exclusions were a mere oversight.

“In many cases these are long-standing policies,” he said. “If it’s not discriminatory then it is just kind of lazy. They adopt policies and they don’t change them when the law changes.”

Vasquez, according to court documents, was told by a recruiter for VMware last January that she would be a “great fit” for a technical support engineer position at the company. A few days later, the lawsuit says the recruiter “abruptly terminated” the interview after Vasquez disclosed that she is not a U.S. citizen, though she has work authorization in the U.S. through DACA. According to the lawsuit, she was told all applicants must be either U.S. citizens or permanent residents.

“It was almost like a wall,” Vasquez said in an interview with The Associated Press, describing the recruiter’s changed demeanor when the citizenship issue came up. Until that point, she said, the interview was “going really well.”

Vasquez, 28, was brought to the U.S. as a baby. She is one of about 700,000 DACA recipients in the U.S. She said she has since gotten a similar job at another tech company.

VMware is the first tech company to face such a lawsuit. Publicly, Silicon Valley has largely supported immigrants and DACA recipients specifically. The company’s former vice president of engineering, Thuan Pham, who now works for Uber as chief technology officer, came to the U.S. as a refugee from Vietnam when he was 10 years old.

The Deferred Action for Childhood Arrivals program was enacted under President Barack Obama in 2012, allowed qualifying immigrants who came illegally to the U.S. as children to apply for renewable, two-year permits that would protect them from deportation and allow them to work. Critics say it encourages illegal immigration and rewards people for breaking the law.