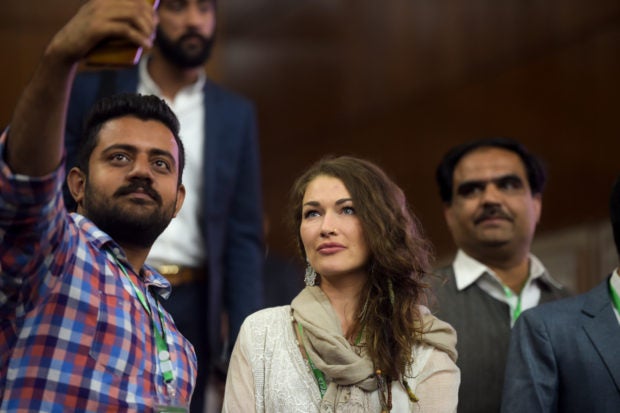 In this picture taken on April 3, 2019, a Pakistani man takes a selfie photo with Canadian “social media influencer” Rosie Gabrielle (C), 32, as she arrives to attend the Pakistan Tourism Summit in Islamabad. – They are young, Western, and full of praise for Pakistan: Travel influencers have discovered the land of the pure but critics warn their rose-tinted filters are selling an inaccurate picture of the conservative, militancy-scarred country. AFP

ISLAMABAD — They are young, Western, and full of praise for Pakistan: Travel influencers have moved in on the “land of the pure”, but critics warn their rose-tinted filters are irresponsible and sell an inaccurate picture of the conservative, militancy-scarred country.

As security improves, cricketer-turned-prime-minister Imran Khan is keen to promote the nation’s tourism potential, with the government claiming it has eased visa restrictions for many foreign visitors.

The push has resulted in an influx of foreign travel bloggers extolling the virtues of its mountains and beaches, as well as its rich heritage and history, from ancient Indus civilizations to Buddhist shrines and Islamic monuments.

“Pakistan, it was the trip of a lifetime,” food and travel YouTuber Mark Wiens told his four million subscribers.

Polish blogger Eva zu Beck informed her followers it could “become the number one tourist destination in the world”, while Canadian social media influencer Rosie Gabrielle said she wanted her stories to “tell the truth” about the country.

But there are concerns influencer content does not reflect the major challenges, from infrastructure to extremism, that Pakistan is facing as it embraces modern tourism.

People often seem to assume that “fame just happens”, or that success is a result of luck. I have seen people reduce my success (whatever this really means) to luck, my gender, or how I look. I want to tell you that success is rarely a product of luck. More often than not, it’s the product of all the “invisible” work and context that precedes it. Here’s the story of my context: everything that contributed to where I currently am in life. When I was 8, I wanted to be a writer. It was then that I started writing daily – a habit I’ve now carried with me for 20 years. When I was 13, my dad gave me my 1st camera, a Canon DSLR with a Sigma macro lens. I eventually saved up enough to buy a 2nd lens. When I was 14, I got my 1st job, at a car wash. I made £4 an hour and spent all my money on CDs, sketchbooks and paints. When I was 15, I only wanted to do art. Writing, painting, photography. Nothing else mattered. When I was 18, my biggest childhood dream came true: I got into Oxford Uni to study languages & literature. I had been working towards this goal for a decade. Even then, people tried to attribute my acceptance into Oxford to ridiculous factors, like my nationality or looks. But I knew better: I had the best grades in school, a love for the subject and a strong mind. Remember that literature IS storytelling. This laid the foundation for all my creative work going forward. After uni, I became the 1st employee of a then-tiny travel media startup, Culture Trip. I started off by developing a team of writers around the world, and over the next 5 years, led growth, content strategies & creative teams. 1.5 years before I started my own YouTube channel, I launched a social media team at @culturetrip. We created social media videos about travel, and in the 1st year these videos accrued 1 BILLION views. From writing, to photography, to travel content creation, I have been at it for 20 years. 20 FRICKING YEARS. None of this “just happened”. And if someone ever tells me again “you’re successful because of how you look”, I will show them this post. Don’t ever allow people to reduce your achievements to fit their own small minds. Pic by the cool Mr @areeshzubair

Gabrielle says her 3,500 kilometer motorcycle trip across the nation was facilitated by a Pakistani association in Oman.

Once seen as an essential stop on the hippie trail, visitor numbers have slumped since the 1970s when the country first underwent sweeping Islamization then descended into a bloody battle with militancy.

Deadly attacks still occur but security concerns are easing, so authorities and businesses are keen to shake the perception it is a hostile and dangerous place.

They are enthusiastic that so-called social media “influencer” advertising, which generally provides glossy snapshots rather than in-depth investigation, can present an alternative vision of Pakistan to a new generation of young and adventurous travelers.

Yet Pakistanis and seasoned foreign travelers warn such posts on social media do not paint a full and honest picture of Pakistan.

Tourism infrastructure is severely underdeveloped, there are opaque government restrictions on places foreigners can visit, and travelers are often harassed — whether by men bothering women in a patriarchal society; or suspicious intelligence officials detaining curious sight-seers or insisting on security escorts.

“All this ‘Everything is wonderful in Pakistan’ is just irresponsible,” reveals June, an indignant 51-year-old Briton who declined to give her last name, she had been harassed by a police officer during a visit to the northwestern Swat valley.

Influencers are shielded from many issues that ordinary visitors face, adds Zara Zaman, an attendee at a recent tourism summit in Islamabad.

“All of these travelers are also traveling with crews and are protected by more powerful people,” she argues.

Hamdani, for example, acted as a driver for both Wiens and another influencer, Trevor James, during their visits, smoothing out any issues.

Zu Beck and Gabrielle, were able to visit the southwestern province of Balochistan — famed for its spectacular scenery, but also for violent insurgencies, which means few foreigners are able to visit without the blessing of intelligence agencies.

What influencers publish “doesn’t represent the real experience,” warns Alexandra Reynolds, an American blogger on her fifth trip to Pakistan, adding that there is a risk that less experienced travellers will be misled by such content and potentially end up in trouble.

“In a time when Pakistan’s international reputation is so fragile, it is not something that should be risked,” the 27-year-old explains, revealing that she too experienced harassment from security forces during a previous trip.

Another tourist Sebastiaan, 30, says he was detained for 14 hours and questioned by suspicious government agents in the southern city of Mithi last September.

There is also frustration from Pakistanis that Western bloggers have been feted by authorities, while locals with better cultural understanding — especially of sensitive issues such as gender or blasphemy — are sidelined.

“It kinds of makes me angry to have white people represent us. We are not completely done with our post-colonial hangover,” says Zaman.

At the tourism summit a group of the Western bloggers were widely photographed meeting Imran Khan, with no local travel influencers in sight, prompting a backlash on social media.

Zu Beck, 27, has gained a huge following in Pakistan, where a local phone company has sponsored some of her videos.