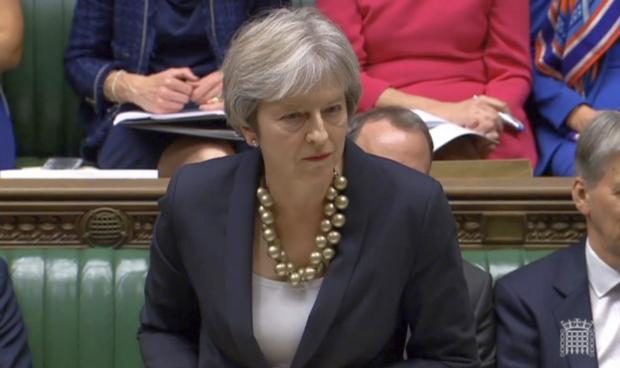 LONDON — Britain’s splintered government was rocked Friday by a burgeoning scandal over who leaked news that Prime Minister Theresa May has conditionally allowed China’s Huawei to develop the UK 5G network.

The bitterly disputed decision was reportedly made at a Tuesday meeting of Britain’s National Security Council.

A handful of ministers who are seen as likely candidates to replace May were said to have argued passionately against giving China the sensitive role.

National Security Council discussions are only attended by senior ministers and security officials who first sign the Official Secrets Act that commits them to keep conversations private or risk prosecution.

But The Daily Telegraph newspaper broke the news late Tuesday that May approved granting Huawei permission to build up “non-core” elements of Britain’s next-generation telecommunications network.

The United States is adamantly opposed to Huawei’s involvement because of the firm’s obligation under Chinese law to help its home government gather intelligence or provide other security services when required.

British media reported that Cabinet Secretary Mark Sedwill — the country’s most senior civil servant — gave those present an ultimatum until Thursday afternoon to deny responsibility for the leak.

Hunt called it “utterly appalling” and Williamson described it as “completely unacceptable”.

They were soon joined by interior minister Sajid Javid — who like Hunt is one of the frontrunners to succeed May as Conservative Party leader — and at least one other attending cabinet member.

May herself said Thursday that she does not comment on National Security Council matters.

Some UK media outlets jokingly compared May’s government to a sieve because of its constant supply of inside information to reporters.

But Tuesday’s leak felt more serious because it concerned both national security matters and Britain’s place in China’s battle for global dominance with the United States.

Finance minister Philip Hammond told a Beijing conference on the Road and Belt Initiative — a project seen by many critics as designed to spread China’s economic and political influence worldwide — that the Huawei revelation appeared to be the first of its kind.

“To my knowledge, there has never been a leak from a National Security Council meeting before,” Hammond said.

“It’s not earth shattering information. But it is important that we protect the principle that nothing that goes on in National Security Council meetings must ever be repeated outside the room.”

Sky News reported Friday that the ongoing government inquiry into the source of The Daily Telegraph’s information could become a formal criminal investigation.

May’s government has been experiencing strains for many months.

May herself has promised to step down as soon as she gets the first stage of Brexit over the line. The new extended deadline for the process is now October 31.

Her commitment to quit has only stoked cabinet rivalries as various ministers jockey for position in a looming leadership race.

The Daily Telegraph remarked that “almost all members of the (National Security Council) are potential leadership contenders”.

The Huawei decision “should be subject to public debate and scrutiny — before it is finalized,” he wrote Friday.