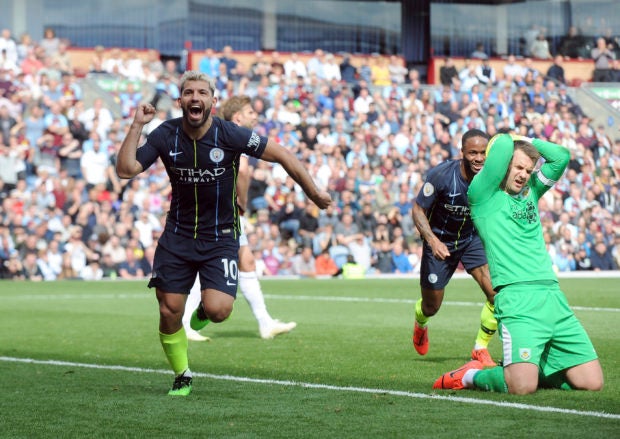 City scraped past Burnley 1-0 thanks to a scruffy strike by Sergio Aguero that needed the confirmation of goal-line technology.

The distance over the line? Less than 3 centimeters.

The nervy wait before referee Paul Tierney awarded the goal was in keeping with a tense match at Turf Moor that ended with City having six defenders on the field — including four center backs — and under instructions from Pep Guardiola to “get it in the corner.”

A win by any fashion is gratefully received by City as it looks to stay ahead of Liverpool in the two-team title race that looks set to go to the final weekend.

With its 12th straight victory in the league, City — seeking to retain the title for the first time — moved one point clear of Liverpool with two games left. City’s last two games are at home to Leicester and away to Brighton, while Liverpool still has to face Newcastle away and Wolverhampton Wanderers at home.

Aguero joined Thierry Henry as the only players to score 20 or more goals in five straight Premier League seasons.
Technology has ruled City’s fate this season.

Another big call in the league came in its 2-1 win over Liverpool in January, when City defender John Stones cleared the ball off the line — off his own deflection — with 11 millimeters to spare. That remains Liverpool’s only loss this campaign.

But it was another story in the Champions League when an injury-time goal by Raheem Sterling, which would have sent City through against Tottenham in the quarterfinals, was belatedly ruled out for offside by the video assistant referee.

At least City knows it will have another chance to win the Champions League next season. The same probably cannot be said of Manchester United anymore after its latest disappointing result, a 1-1 home draw with Chelsea. Arsenal is also struggling to qualify for Europe’s top club competition — by virtue of its Premier League placing, anyway — after getting beaten 3-0 at Leicester.

Ole Gunnar Solskjaer has a decision to make about David de Gea.

The Spain goalkeeper made yet another mistake Sunday, fumbling a long-range shot to allow Marcos Alonso to convert the rebound and earn Chelsea a point at Old Trafford. That canceled out Juan Mata’s early goal.

De Gea has also produced errors to concede goals against Barcelona and Manchester City over the last two weeks. Not long ago he was regarded as United’s best player but he is turning into a liability.

“There is no chance anyone can blame him for losing points,” Solskjaer said. “He knows he could have had (held) that shot, but that is football. David is one who likes to play games and I will have chats with him and he will respond in the right way.”

It might be too late to save United from dropping back into the Europa League next season.

United stayed in sixth place, and is five points behind Tottenham and three behind Chelsea. Arsenal is a point ahead of United in fifth. Tottenham, Chelsea and Arsenal all have a much better goal difference than United.

In the last 10 games involving the four teams in the race for the top four, only one of them has claimed a win.

“It seems nobody wants the third and fourth spot, everyone is struggling,” Mata said. “We must get six points but it doesn’t depend on us anymore.”

Arsenal has conceded three goals in each of its last three games for the first time in the 27-year history of the Premier League.

It could mean the team’s best chance of Champions League qualification is through winning the Europa League rather than finishing in the Premier League’s top four.

Ainsley Maitland-Niles was Arsenal’s biggest culprit in the loss at Leicester after getting himself sent off for collecting a second booking in the 36th minute.

Youri Tielemans put Leicester ahead in the 56th and Jamie Vardy added two late goals for Brendan Rodgers’ team, which climbed to eighth. It is three points behind Wolverhampton Wanderers in the fight for seventh place, which may still earn a route to the Europa League.

Sheffield United secured a return to the Premier League after an absence of 12 years, but only after a bizarre series of events in a match involving two of its promotion rivals, Leeds and Aston Villa.

Leeds manager Marcelo Bielsa instructed his team to allow Villa to score an uncontested goal late in the game, which ultimately clinched a 1-1 draw for the visitors. With that draw, Sheffield United sealed promotion with a match to spare.

Leeds had scored the opening goal at Elland Road while Villa had a man down injured. It sparked a series of on-field melees, during which Villa had Anwar El Ghazi sent off for violent conduct.

Bielsa, the Argentine coach, then told his players to let Villa equalize, leading to the bizarre sight of Albert Adomah running from the kickoff through the Leeds team and scoring into an empty net. Only Leeds defender Pontus Jansson tried to stop Adomah, attempting a swipe at the ball but missing it.

Bielsa then argued with Villa assistant manager John Terry, the former Chelsea captain, on the touchline.

Leeds will now be one of the four teams in the playoffs.