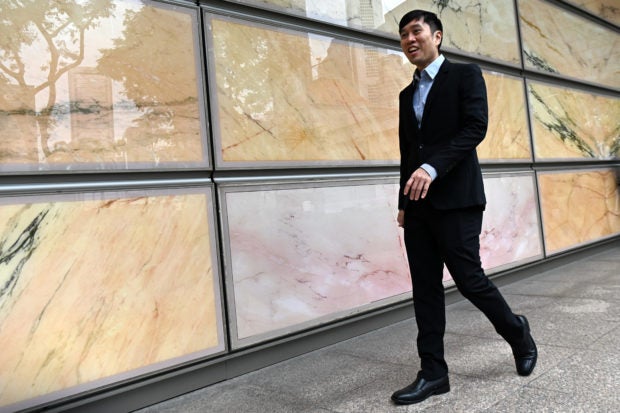 Singaporean activist Jolovan Wham leaves the High Court in Singapore on April 29, 2019 after his sentencing for scandalizing the judiciary. AFP

SINGAPORE — A Singaporean activist was Monday fined for questioning the independence of the judiciary on Facebook, the latest case to highlight what critics say is the country’s heavy-handed approach towards dissent.

While it is wealthy and modern in many ways, tightly-controlled Singapore is regularly criticized by rights groups for restricting freedom of expression with tough laws.

In the latest case, activist Jolovan Wham was found guilty in October of contempt of court for posting on Facebook that Singapore’s judiciary lacked integrity and independence in cases involving the government or politicians.

State prosecutors had asked for a fine up to three times higher, with a maximum three weeks in jail if he failed to pay.

Wham, who is also an advocate for migrant workers’ rights, said he will appeal the conviction and sentence.

The judge noted that Wham “did not show any remorse” even after conviction, but did not agree to a request from prosecutors for the court to order him to apologize and remove the post.

It was Wham’s latest run-in with the authorities. In February, he was fined Sg$3,200 for organizing an illegal public discussion that featured prominent Hong Kong democracy campaigner Joshua Wong speaking via Skype.

He is also appealing that ruling.

His cases are among several that have alarmed rights groups. In December, the editor of a Singaporean website was charged with defamation for publishing a letter alleging corruption among the country’s leaders.

The same month, Prime Minister Lee Hsien Loong sued a blogger for defamation after he shared an article on Facebook linking the leader to a corruption scandal in neighboring Malaysia. Lee said the article was false and without basis.