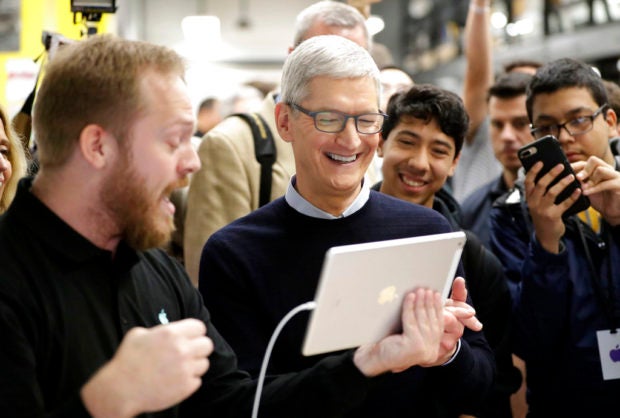 SAN FRANCISCO — Apple delivered stronger-than-expected results Tuesday for the past quarter as gains in services helped offset slumping iPhone sales, sparking a rally in shares of the technology giant.

California-based Apple reported a 16 percent drop in profits in the just-ended quarter to $11.6 billion, as overall revenues dipped five percent to $58 billion.

Apple shares rallied five percent in after-hours trade, with the results showing better-than-anticipated results from its new products and services in the fiscal second quarter to March 30.

“Our March quarter results show the continued strength of our installed base of over 1.4 billion active devices, as we set an all-time record for services, and the strong momentum of our wearables, home and accessories category, which set a new March quarter record,” said chief executive Tim Cook.

“We delivered our strongest iPad growth in six years, and we are as excited as ever about our pipeline of innovative hardware, software and services.”

Apple has been scrambling to develop new revenue streams amid stagnant growth and increased competition in the smartphone market, which has been the company’s main profit driver.

China-based Huawei outsold Apple’s iPhones in the first quarter of this year, seizing the California company’s second place spot in a tightening smartphone market dominated by Samsung, according to Chinese-owned market tracker IDC.

A total of 310.8 million smartphones were shipped globally during the first three months of this year in a 6.6 percent decline from the same period in 2018, preliminary IDC data showed.

It was the sixth consecutive quarter of decline for global smartphone shipments.

Apple had a challenging first quarter, with iPhone shipments dropping by a “staggering” 30.2 percent from a year earlier to 36.4 million units, IDC reported.

Huawei, meanwhile, weighed in with 50.3 percent growth to ship 59.1 million smartphones and put it within “striking distance” of Samsung, according to IDC.

But the money Apple took in from services or digital content grew 16 percent to $11 billion, reflecting growth in music, Apple Pay and other new offerings from the firm.

Apple also saw growth in its wearables — which include its Apple Watch and earbuds — and its smart HomePod speaker.

The company also said it would spend an additional $75 billion for share repurchases and boost its dividend, delivering more cash to its investors. It ended the quarter with some $225 billion in cash.

The latest results “will be a major sigh of relief for investors and give the bulls another feather in their cap heading into the next few quarters,” said Daniel Ives of Wedbush Securities.

Apple is in the midst of a major shift to services, apps and subscriptions as it faces a tougher smartphone market.

It introduced Apple News+ for magazines and newspapers and will launch a new streaming video platform later this year taking on Netflix. Apple also is launching a credit card in partnership with Goldman Sachs and a mobile gaming subscription service.

Ives said the streaming service could offer a major boost for Apple and bring in some 100 million consumers over the next three years.

Apple saw lower revenues from its China region, prompting the company to cut prices for iPhones to help ignite sales.

Cook told analysts on a conference call that “we’ve seen very positive customer response to the pricing actions we’ve taken in that market,” and was optimistic that Beijing and Washington would resolve differences over trade that could threat Apple’s growth.

“We believe strongly in our long-term opportunity in China, thanks to our robust ecosystem, our talented developer community, and the countries growing population of tech-savvy consumers who value the very best products and services,” he said.