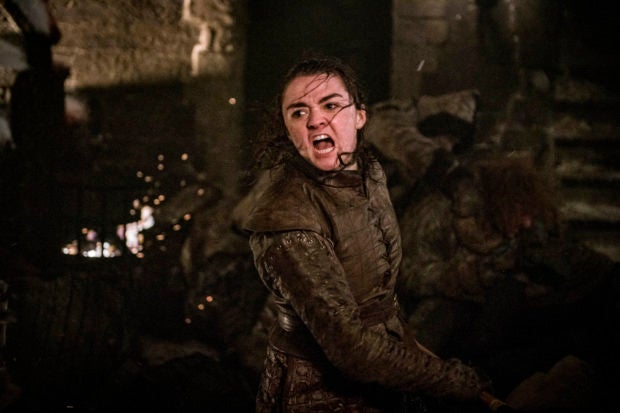 This image released by HBO shows Maisie Williams in a scene from “Game of Thrones,” that aired Sunday, April 28, 2019. AP

LOS ANGELES — HBO’s “Game of Thrones” has once again ridden a high body count to a record viewer count.

Sunday’s big-battle episode, the third of the final season, drew 17.8 million viewers either live on the network at 9 p.m., streamed, on-demand or in a rerun that aired later that night, the Nielsen company said.

That made it the week’s most-watched show cable or broadcast and the most-watched one-day event ever in HBO’s four decades of existence, topping the “Game of Thrones” season eight premiere, which had 17.4 million viewers two weeks earlier.

The episode known as “The Long Night” was the longest in series history at 1 hour, 22 minutes. It featured a battle between the living and the dead — teased and anticipated since season one — that had a sky-high casualty count even for the famously bloody fantasy series.

Some 12.02 million people watched the episode live, a figure eclipsed only by the season seven finale.

The May 19 series finale is expected to break both records.

The numbers for Sunday’s episode are likely to grow considerably after delayed and repeat viewings. HBO said 38 million people have now watched the season eight premiere.

CBS shows dominated the rest of the week’s top 10, with “The Big Bang Theory” second, “Young Sheldon” third and “60 Minutes” fourth. That helped it win the week overall in prime time, averaging 4.4 million viewers. NBC had 3.4 million viewers, ABC had 3 million, Fox had 2 million, ION Television had 1.1 million, Telemundo had 1 million, Univision had 880,000, and the CW had 680,000.

Fox News Channel was the week’s most popular cable network, averaging 2.27 million viewers in prime time. TNT had 2 million, ESPN had 1.6 million, MSNBC had 1.58 million and HGTV had 1.2 million.

ABC’s “World News Tonight” topped the evening newscasts with an average of 8.5 million viewers. NBC’s “Nightly News” was second with 7.7 million and the “CBS Evening News” had 5.6 million viewers.

For the week of April 22-28, the top 10 shows, their networks and viewerships: