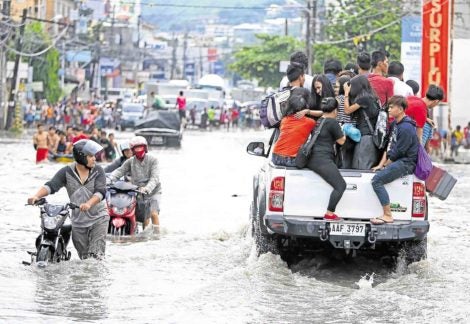 HITCHING A RIDE In this 2016 photo, residents of Mandaue City, Cebu, hitch a ride on a pickup truck to cross a flooded street. Flooding is among the problems that UP researchers want to address. LITO TECSON/CEBU DAILY NEWS

CEBU CITY — Researchers from the University of the Philippines have urged local government units (LGUs) to adopt their scientific studies or update local legislation to solve the country’s perennial problems, such as floods, water shortage and diseases.

Jonnifer Sinogaya, dean of UP Cebu’s College of Science, said local officials, by using their research, could reduce the impact of disasters on their localities. 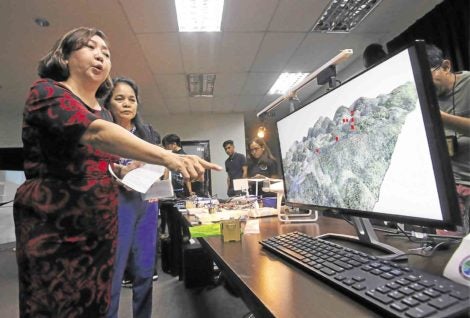 Sinogaya said this would aid disaster management planners and responders from the government in addressing the loss of lives and damage to property caused by natural disasters, particularly flooding.

Acquisition and preprocessing of Lidar data are done by UP on its Diliman campus in Quezon City.

“With several typhoons visiting us, we don’t feel secure. Had people been warned about high-risk areas, grave effects of calamities should have been prevented,” Sinogaya said. “These maps can save hundreds of lives, including your own.”

Another school is conducting research to address flooding in Cebu, he said.

Ryan Ciriaco Dulaca, instructor of the Department of Computer Science in UP Cebu, said there was also a need to find ways to address the shortage of clean water.

“El Niño has come and we expect more water interruptions (in the coming days),” Dulaca said. An ongoing project is aimed at generating maps of potential water sources in Cebu, he added.

Another problem that the group wanted to address, he said, was the prevalence of fire.

“We want to utilize technology to mitigate the negative outcome of fire. Maybe, with technology, we can help the [Bureau of Fire Protection] to respond effectively,” said Aileen Vicente, another professor at the computer science department.

Vicente said they intended to produce software that could be used by local governments to produce research-based information that could support and drive urban planning in their communities.

“Our aim is to provide our emergency responders and officials, strategic planners, and policymakers a wealth of information on fire disaster assessment and risk evaluation to be able to combat, if not, mitigate the negative consequences of fire,” she said.

Another problem the researchers would try to solve is the emergence of vector-borne diseases or those transmitted by insects.

Richie Eve Ragas, a faculty member of the College of Science, said her group was planning to establish the Regional Center for Molecular Diagnostics and Research, which would cater to the needs of research, instruction, extension and product development under a “wholistic approach involving human, plant, animal and the environment.”

“We want to educate especially the nontech people. We play a crucial role in educating the public about the threats that lurk in the shadows,” he said.

The UP Cebu Cybersecurity Research and Extension Center, he said, will be the first research laboratory in Central Visayas to contribute in cybersecurity education and multidisciplinary research.