MANILA, Philippine — Business tycoon Manny Pangilinan may be proud to own a new 5G Huawei phone, but netizens were quick to spot that he wasn’t using the device.

The PLDT Chair and CEO tweeted on Tuesday that he now owns a Huawei phone with super-fast 5G internet. 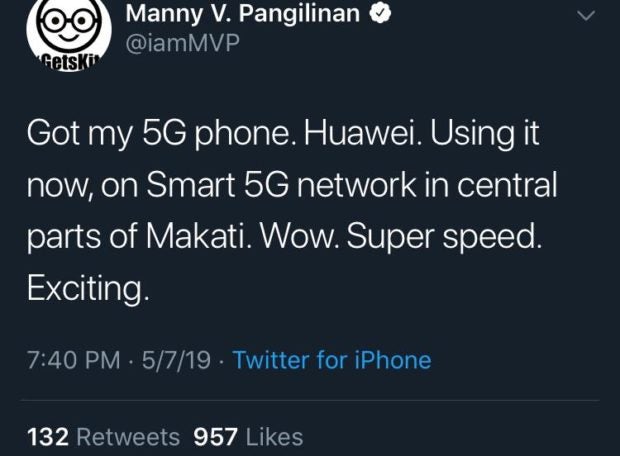 However, he may have outed himself that he was not using his Huawei phone when he made the announcement. Some were quick to point out that his tweet had the mark “Twitter for iPhone.”

His tweet became viral, having 133 retweets and 932 likes, as of this writing.

Pangilinan’s tweet also garnered several reactions from netizens, with one even using a GIF image to comment.

At least you tried? pic.twitter.com/JN0VQWKPOs

Huaweit a second using it now?
Maybe he is using two phones? Who knows😂😂😂 pic.twitter.com/AuWhJC9mWY

The tycoon was able to redeem himself on Wednesday when he showed off his new Huawei phone while doing a Speed Test on how fast 5G internet technology is. /ee