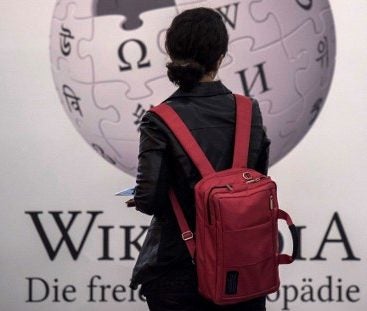 A visitor stands in front of the stand of online encyclopedia Wikipedia at the Frankfurt Book Fair on October 13, 2017 in Frankfurt am Main, western Germany.  AFP

BEIJING, China — Beijing has broadened its block of online encyclopedia Wikipedia to include all language editions, reported an internet censorship research group, ahead of the country’s most politically explosive anniversary.

According to a report by the Open Observatory of Network Interference (OONI), China started blocking all language editions of Wikipedia last month.

Previously, most editions of Wikipedia — besides the Chinese language version, which was reportedly blocked in 2015 — were available, OONI said in their report.

AFP could not open any of Wikipedia’s versions in China on Wednesday.

“At the end of the day, the content that really matters is Chinese-language content,” said Charlie Smith, the pseudonym of one of the co-founders of Greatfire.org, which tracks online censorship in China.

“Blocking access to all language versions of Wikipedia for internet users in China is just symbolic,” he told AFP. “It symbolizes the fear that the Chinese authorities have of the truth.”

Wikimedia Foundation, the non-profit organization that hosts Wikipedia, did not immediately respond to AFP’s request for comment.

China’s online censorship apparatus — dubbed the “Great Firewall” — blocks a large number of foreign sites in the country, such as Google, Facebook and The New York Times.

Topics that are deemed too “sensitive” are also scrubbed, such as the 1989 crackdown on Tiananmen pro-democracy protesters which will mark its 30th anniversary on June 4.

The expanded block of Wikipedia comes as Chinese authorities ramp up online controls and crack down on Great Firewall circumvention tools, such as virtual private network (VPN) software, under Chinese President Xi Jinping.

In November, China’s cyberspace authority said it had “cleaned up” 9,800 accounts on Chinese social media platforms like messaging app WeChat and the Twitter-like Weibo that it accused of spreading “politically harmful” information and rumors.

Chinese Twitter users have also told AFP that they have experienced intimidation from local authorities — and even detention — for their tweets.

The latest move to block all versions of Wikipedia could be linked to online translation tools, which make it easy for Chinese users to read anything on Wikipedia, explained Smith.

Images can also be considered taboo, he said.

“A picture is worth a thousand words, and there is no dearth of Tiananmen-related imagery on the Wikipedia website,” Smith added.