What is the ‘Christchurch Call’ against online extremism? 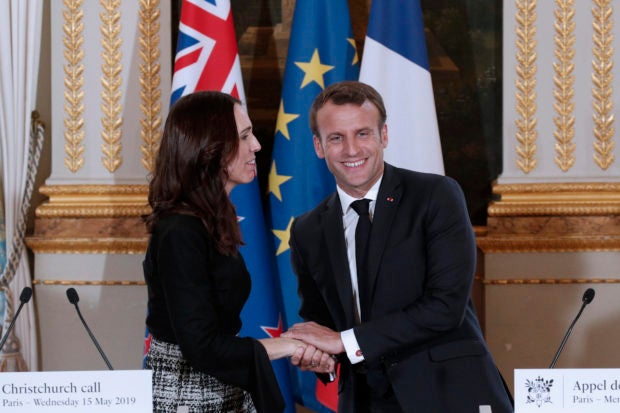 PARIS — World leaders and top technology firms unveiled a range of commitments Wednesday to curb the posting and spread of extremist violence and hate speech on the internet, aiming to stop social media from becoming a tool of terrorism.

Launched by France and New Zealand, the “Christchurch Call to Action” lays out steps for both governments and companies, though the voluntary pledge leaves it up to signatories to come up with specific policies or technologies.

Britain, Canada, Ireland, Norway, Jordan, Senegal and Indonesia joined the initial group of countries backing the call, as did the EU.

It was also backed by US tech giants Twitter, Facebook, Google and Microsoft, alongside Dailymotion, the Qwant search engine and Wikipedia founder Jimmy Wales.

“The events of Christchurch highlighted once again the urgent need for action and enhanced cooperation among the wide range of actors with influence over this issue,” it says.

Signatories agree to cooperate with industry rivals on developing tools such as machine-learning for quickly detecting and removing hateful content, and making it easier for users to flag harmful material.

In particular they will implement “immediate, effective measures” to increase oversight of livestreaming, including the possibility of real-time reviews in some cases.

Moderating content for violence or extremist ideologies, via either human oversight or artificial intelligence research, should be a priority for all companies.

That could include efforts to improve “digital fingerprinting” technologies that would identify pictures and videos, which could be kept in a common database to ensure they aren’t spread across multiple platforms.

Firms must also review their algorithms that determine what people see in their online accounts, to prevent illicit content from going viral and promote instead “credible, positive alternatives or counter-narratives.”

They also pledge to jointly invest in and expand the Global Internet Forum to Counter Terrorism (GIFCT), founded by Facebook, Microsoft, Twitter and YouTube in 2017 to prevent the exploitation of their platforms.

Larger firms are also urged to share their findings with smaller platforms and with developing nations, which might not have the resources to quickly spot and remove illegal content.

Nations who sign on to the Christchurch Call are not specifically urged to craft new laws or regulations, but rather to effectively enforce existing laws prohibiting the posting of terrorist or violent content.

They are also encouraged to invest in education and “media literacy” to combat extremist ideologies, and to fight against social inequalities that fuel extremism.

Governments should also ensure that media outlets be careful in their reporting on terrorist attacks, avoiding depictions of events that could “amplify terrorist and violent extremist content.”

Officials should also help accelerate research into technical tools for preventing the uploading of violent content, and quickly detecting when it has breached such defenses.

Such solutions should be shared “through open channels, drawing on expertise from academia, researchers and civil society,” it says.

Efforts should also be made to ensure cooperation among law enforcement agencies for prosecuting illegal online activities.