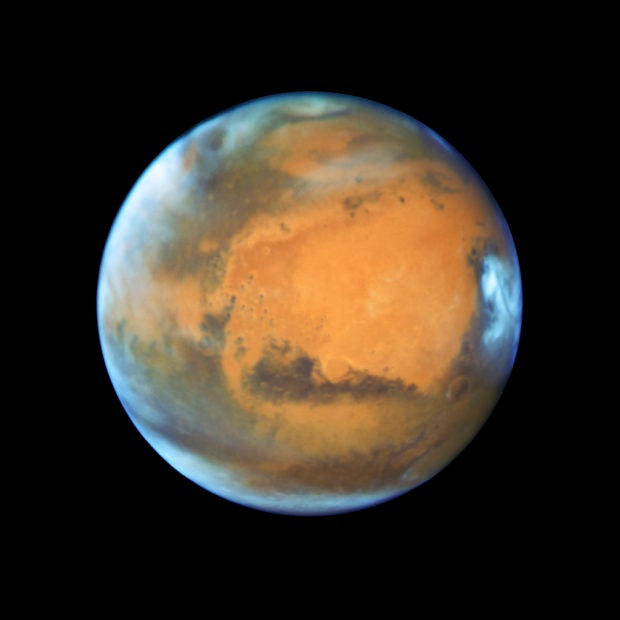 This May 12, 2016 image provided by NASA shows the planet Mars. AP FILE PHOTO

WASHINGTON — On December 11, 2017, US President Donald Trump signed a directive ordering NASA to prepare to return astronauts to the Moon “followed by human missions to Mars and other destinations.”

The dates fixed by the space agency are 2024 for the Moon and Mars in 2033, but according to experts and industry insiders, reaching the Red Planet by then is highly improbable barring a Herculean effort on the scale of the Apollo program in the 1960s.

“The Moon is the proving ground for our eventual mission to Mars,” NASA administrator Jim Bridenstine said at a conference this week.

We are going to the Moon — to stay.

“The Moon is our path to get to Mars in the fastest, safest way possible. That’s why we go to the Moon.”

According to Robert Howard, who heads up the lab developing future space habitats at the legendary Johnson Space Center in Houston, the hurdles aren’t so much technical or scientific as much as a question of budget and political will.

“A lot of people want us to have an Apollo moment, and have a president stand up like Kennedy and say, we’ve got to do it and the entire country comes together,” he said.

“If that happened, I would actually say 2027. But I don’t think that’s going to happen. I think in our current approach, we are going to be lucky to do it by the 2037 date.”

These were our top stories… this week at NASA! Watch: https://t.co/zTG177Xi4d pic.twitter.com/gVh5fxK0qe

But Howard said if he were to be pessimistic, and assume political dithering lay ahead, “it could be the 2060s.”

From the design, manufacture, and testing of the rockets and spaceships required to learning the best way to grow lettuce: all the groundwork remains to be done.

Just getting there will take six months at least, as opposed to three days to the Moon.

The whole mission could take two years, since Mars and the Earth are closet to each other every 26 months, a window that must be taken.

“A second is our food system,” she added. The current plant system ideas “are not packageable, portable or small enough to take to Mars.”

And then there’s the question of dealing with medical emergencies: astronauts will need to be able to treat themselves in case of any accidents.

“I actually think a big deal is the suits,” added Jennifer Heldman, a NASA planetary scientist.

One of the major gripes of the Apollo astronauts was their gloves, which were too inflated and prevented them from doing dexterous work.

NASA is developing a new suit, the first in forty years, called xEMU, but it won’t be ready for its first outing in the International Space Station for a few more years.

On Mars, dust will be even more of a problem than on the Moon. The Apollo astronauts returned with huge amounts of lunar dust in their modules. Keeping it out of habitats will be critical for a mission that involves spending months on the Red Planet.

Techniques to exploit Martian resources to extract water, oxygen and fuel necessary for humans to live there don’t yet exist — and must be tested on the Moon by the end of this decade.

Finally there’s the most fundamental question: how will a group of people cope with the psychological stress of being totally isolated for two years?

It won’t be possible to communicate in real time with Houston mission control: radio communications will take between four and 24 minutes between the planets, one-way. NASA plans to test out delayed-communication exercises on board the ISS in the coming years.

Artificial intelligence must also be developed to assist and guide the astronauts.

A researcher commissioned by NASA to study the likelihood of getting to Mars by 2033 concluded the objective was “infeasible.”

“It isn’t just budget,” said Bhavya Lal of the Science and Technology Policy Institute. “It’s also organization bandwidth, how many things can NASA do at the same time?”

For Lal, the more realistic timeframe was 2039.