Huawei apt to be stripped of Google services after US ban 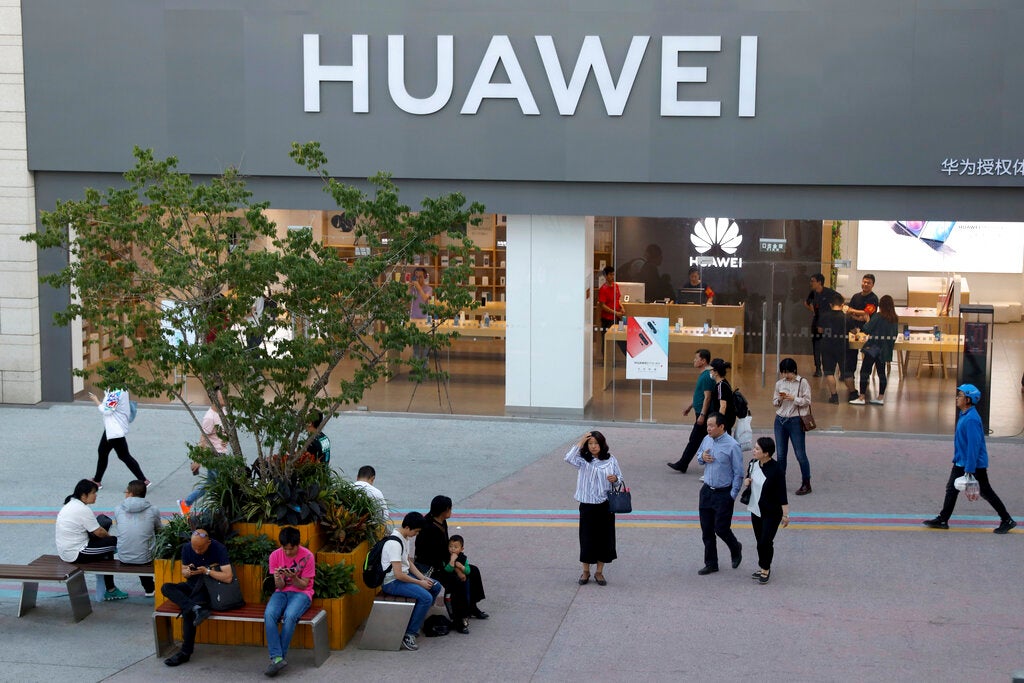 A woman gets her bearing outside a Huawei store in Beijing Monday, May 20, 2019. Google is assuring users of Huawei smartphones the American company’s services still will work on them following U.S. government restrictions on doing business with the Chinese tech giant. (AP)

Huawei could quickly lose its grip on the No. 2 ranking in worldwide cellphone sales after Google announced it would comply with U.S. government restrictions meant to punish the Chinese tech powerhouse.

The Trump administration’s move, which effectively bars U.S. firms from selling components and software to Huawei, ups the ante in a trade war between Washington and Beijing that partly reflects a struggle for global economic and technological dominance.

Google said it would continue to support existing Huawei smartphones but future devices will not have its flagship apps and services, including maps, Gmail and search. Only basic services would be available for future versions of the Android operating system on Huawei’s smartphones.

Washington claims Huawei poses a national security threat, and its placement on the so-called Entity List by the Trump administration last week is widely seen as intended to persuade resistant U.S. allies in Europe to exclude Huawei equipment from their next-generation wireless networks, known as 5G.

“This is major crisis for Huawei. Instead of being the world’s largest handset manufacturer this year, it will struggle to stay two, but probably fall behind,” analyst Roger Entner said. “How competitive is a smartphone without the most well-known and popular apps?”

Huawei will likely use its own, stripped-down version of Android, whose basic code is provided free of charge by Google. But the Mountain View, California, company said Huawei would not be authorized to use other Google software and services if the sanctions go forward as announced.

Google could seek exemptions, but would not comment on whether it planned to do so.

Entner, founder of Recon Analytics, said Google itself won’t feel a large direct impact, “as consumers will shift to other Android devices. The biggest concern is not to be caught in the crossfire of two governments.”

Gartner analyst Tuong Nguyen said 48% of Huawei’s phone shipments last year were outside of China and the company will need to scramble not to lose market share.

Samsung led global smartphone sales in the first quarter of this year with a 23.1% share. Huawei was second with 19%, followed by Apple at 11.7%, according to IDC.

Huawei’s smartphone sales in the U.S. are tiny — and the Chinese company’s footprint in telecommunications networks is limited to smaller wireless and internet providers— so any impact on U.S. consumers of a Google services cutoff would be slight.

Hardware suppliers led by Qualcomm, Broadcom and Intel would also be forced to halt shipments to Huawei under the Commerce Department rule, which requires all U.S. technology sales to the company to obtain U.S. government approval unless exceptions are made.

The Commerce Department on Monday announced a 90-day grace period this week. In a report, the global risk assessment outfit Eurasia Group said that if the sanction process helps persuade European carriers to shun Huawei equipment, a full ban on purchases of U.S. technology products and services could be avoided.

Google, a unit of Alphabet Inc., said in a statement late Sunday that it was complying with and “reviewing the implications” of the requirement for export licenses for technology sales to Huawei, which took effect Thursday. “For users of our services, Google Play and the security protections from Google Play Protect will continue to function on existing Huawei devices,” it added.

The U.S. government says Chinese suppliers including Huawei and its smaller rival, ZTE Corp., pose an espionage threat because they are beholden to China’s ruling Communist Party. But American officials have presented no evidence of any Huawei equipment serving as intentional conduits for espionage by Beijing.

Huawei smartphone shipments rose 50% in the first three months of 2019 to 59.1 million, compared with a year earlier, while the global industry’s total fell 6.6%, according to IDC. Shipments from Samsung and Apple both declined.

Huawei defended itself Monday as “one of Android’s key global partners.” The company said it helped to develop a system that “benefited both users and the industry.”

“We will continue to build a safe and sustainable software ecosystem, in order to provide the best experience for all users globally,” the company said.

A foreign ministry spokesman, Lu Kang, said China will “monitor the development of the situation” but gave no indication how Beijing might respond.

The U.S. order took effect Thursday and requires government approval for all purchases of American microchips, software and other components globally by Huawei and 68 affiliated businesses. Huawei says that amounted to $11 billion in goods last year.

That could certainly create some collateral damage for U.S. companies.

The California chipmaker Xilinx Inc. tumbled 4% Monday. David Wong, an analyst with Nomura, said Xilinx has benefited from demand in next-generation, 5G technologies and “action against a major maker of communications infrastructure equipment like Huawei likely poses risk for Xilinx.”