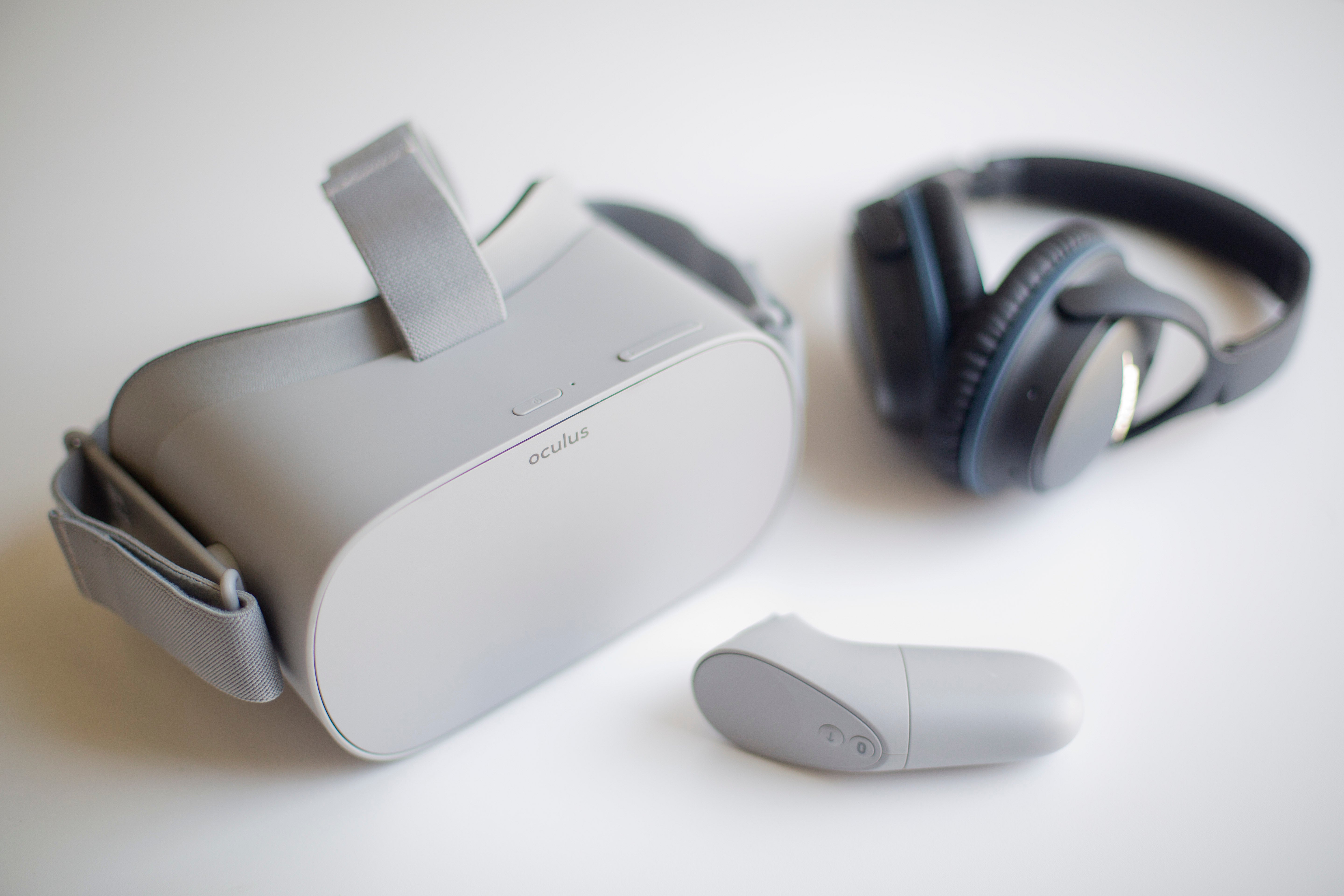 Axon Immersion Training Virtual Reality (VR) headset, used in training police officers to learn the best way to interact with people who suffer with autism, Thursday, May 23, 2019 in Washington. Police officers are now using virtual reality to learn the best ways to interact with people who suffer from autism and de-escalate situations that could quickly turn awry. A new training simulation using virtual reality headsets is being rolled out by Aon, the company best known for developing the Taser. (AP Photo/Pablo Martinez Monsivais)

WASHINGTON  — An autistic man walks out of a store without paying for a toy he picked up. He’s followed by a storekeeper demanding he come back inside. The situation quickly escalates, and police are called.

Officers arrive, their patrol car’s lights flashing and sirens blaring, to find the man in the parking lot, yelling and not responding to their commands. They have a choice: confront the man and risk having the situation turn violent or regroup to figure out a different approach.

The scenario is part of a virtual reality simulation for police that’s being developed by Axon — the company known best for developing the Taser — so officers can learn how to interact with people who have autism and de-escalate situations that could quickly turn awry. The developmental disorder that can involve varying degrees of language and social impairments, often including repetitive behaviors. In 2018, the U.S. government estimated about 1 in 40 kids is diagnosed with autism.

This week, the company announced a partnership with Chicago police to train officers by using virtual reality headsets. It will be making the program, developed with the help of mental health and autism experts, available to police departments across the U.S.

For now, they offer two training modules: one for autism and another for dealing with people who have schizophrenia.

“The ability to tell the difference between someone who’s acting in an unusual way that may be due to their autism versus someone who could be a risk to you can be a really fine line,” said David Kearon of the advocacy group Autism Speaks. “When you’re trying to make that judgment very quickly, that’s where we see mistakes made.”

The officers don headsets similar to those used for video games and are immediately immersed in a virtual reality training ground. With a small remote, they can pick the scenario and go through each training scenario in just about five minutes.

In the autism scenario, officers experience it first from the point-of-view of the autistic person, watching as the storekeeper approaches somewhat angrily and pulls the toy robot away, telling the man he needs to pay for it. Police are called and officers arrive and confront him.

They can then play it from the perspective of the police officers, observing tell-tale signs that someone could be autistic.

A crackling call on the radio reports an aggressive male suspect shoplifting and fighting with an employee. The officers pull up to find the man in the parking lot, holding the toy and flailing his arms. They introduce themselves and ask the man what’s happening. He doesn’t respond.

“We need you to calm down!” an officer tells the man, who is hitting himself in the head and speaking incoherently.

The officers can then choose to either talk to their partner or close in and confront the man.

The officers are taught that flashing lights and sirens can be overstimulating and just turning them off could ease the situation. They are also encouraged to remain calm, avoid physically confronting the person and to engage specially trained officers from a mental health crisis team, if their department has one.

The training can also create “a sense of empathy” and emphasizes that other methods like shouting or grabbing a suspect, “can hyper-escalate someone who is autistic,” Rick Smith, Axon’s founder and CEO, said in an interview with The Associated Press.

“Rather than just training police how to use a Taser, maybe we should train them how to avoid using it,” he said.

In Graham, Texas, about 120 miles (195 kilometers) west of Dallas, a 19-year-old man was throwing rocks at his neighbor’s fence. The autistic teenager, Michael Moore, had difficulty communicating with the responding police officers, so they guessed he might have been drunk or high. They tried to give him a field sobriety test and when he failed the test, they moved in to arrest him. A struggle ensued. Body camera video shows the teen, whose mother says he has a “high functioning” form of autism, being shot with a Taser and thrown to the ground.

“When the officers approached him, he tried to maintain contact,” his mother, Tracie Brown, said. “It’s very hard for people with autism.”

“His hands were visible at all times and he kept saying over and over, ‘My mama is inside. Let me go get my mom’ and for whatever reason the police officers refused to come and verify,” she said.

Brent Bullock, Graham’s interim chief, said all of his 25 officers underwent autism training after the incident and were given field guides to identify whether someone may have autism or be suffering from a mental health crisis.

“I believe it was a positive thing,” he said. Since then, his officers have encountered similar situations and managed to de-escalate them, Bullock said.

Axon plans to provide autism training free with the purchase of Taser devices. Hundreds of law enforcement agencies already use the company’s other products, like Tasers and body camera.

The virtual reality experience may be more effective for officers than conventional training, Smith said, because officers can feel what it would be like to be on the other side of the encounter and may be more likely to remember it.

“By putting them through this training, we’re giving the officers a chance to learn through experience, which we know is a much more effective way than just trying to remember some checklist they may have been taught in the academy,” Smith said.  /muf