Who needs a TV cooking show when you can host one online?

The show is under an hour and Dalkin’s husband, Thomas Dawson, records it and reads out questions and comments from viewers.

Dalkin, who went to culinary school and has worked as a private chef, will offer tips for de-boning salmon, cleaning mushrooms, and joke about her polka dot sweatsuit that Thomas says resembles pajamas. It’s all very casual and doable, which Dalkin said is the point. 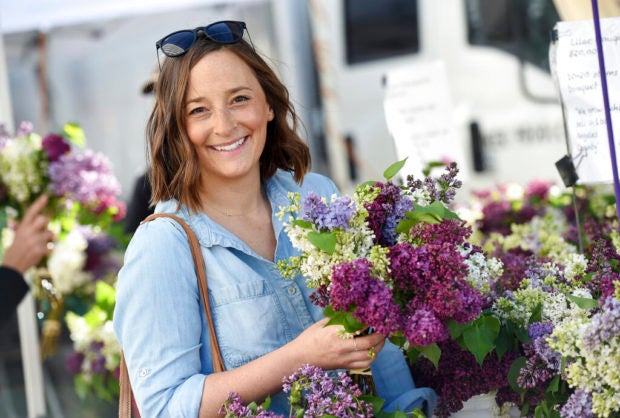 Dalkin, the chef behind the popular Website and social media accounts, What’s Gaby Cooking, is forging her own path. Every Monday she posts a live demo to Instagram as she cooks dinner which has become appointment viewing for some fans. Her husband films it and reads questions from viewers as she’s cooking. Image: AP Photo/Chris Pizzello

“It’s like you’re cooking alongside your best friend in the kitchen,” said Dalkin in a recent interview. “I don’t want to spend five hours cooking a meal and I know everyone else doesn’t. Let’s show people how to make something simple and delicious and go about our lives.”

It turns out there is an audience who make tuning in a ritual.

“We have people in India where it’s their morning when they’re watching,” said Dalkin.

She recently got a message from a viewer’s husband who said every Monday night he falls asleep listening to her voice because his wife is watching as they go to bed. He wanted to not like her, but now he’s a fan.

She also encourages her followers to make the recipes throughout the week and tag her on Instagram, which as Dalkin notes, is free marketing and publicity.

Thomas may be heard and not seen in the cooking demos, but he’s earned his own devotees. There’s an Instagram account, What’s Thomas Eating, where he’s often poking fun at his wife. He sometimes posts his own videos when he’s home alone and cooking her recipes.

“He started What’s Thomas Eating as a total joke and I think sometimes he’s more influential than I am,” laughed Dalkin.

Dalkin says she’s not looking for a traditional cooking show because she feels like she’s already doing that online.

Dawson is in the process of transitioning from his day job in advertising to work with Gaby full-time. The goal is to ramp up their content and produce more videos for her website, YouTube and Instagram accounts. Dalkin also has two cookbooks, “Absolutely Avocados” (fans know she seriously loves avocados,) and “What’s Gaby Cooking: Everyday California Food.” She’s now working on a third.

“I haven’t taken a day off in the last probably five years,” confesses Dalkin. “Sometimes I’ll have a full meltdown because I can’t think of any recipes and Thomas is good about being like, ‘Let’s go for a walk and remove ourselves from the kitchen and where we normally work.'” NVG