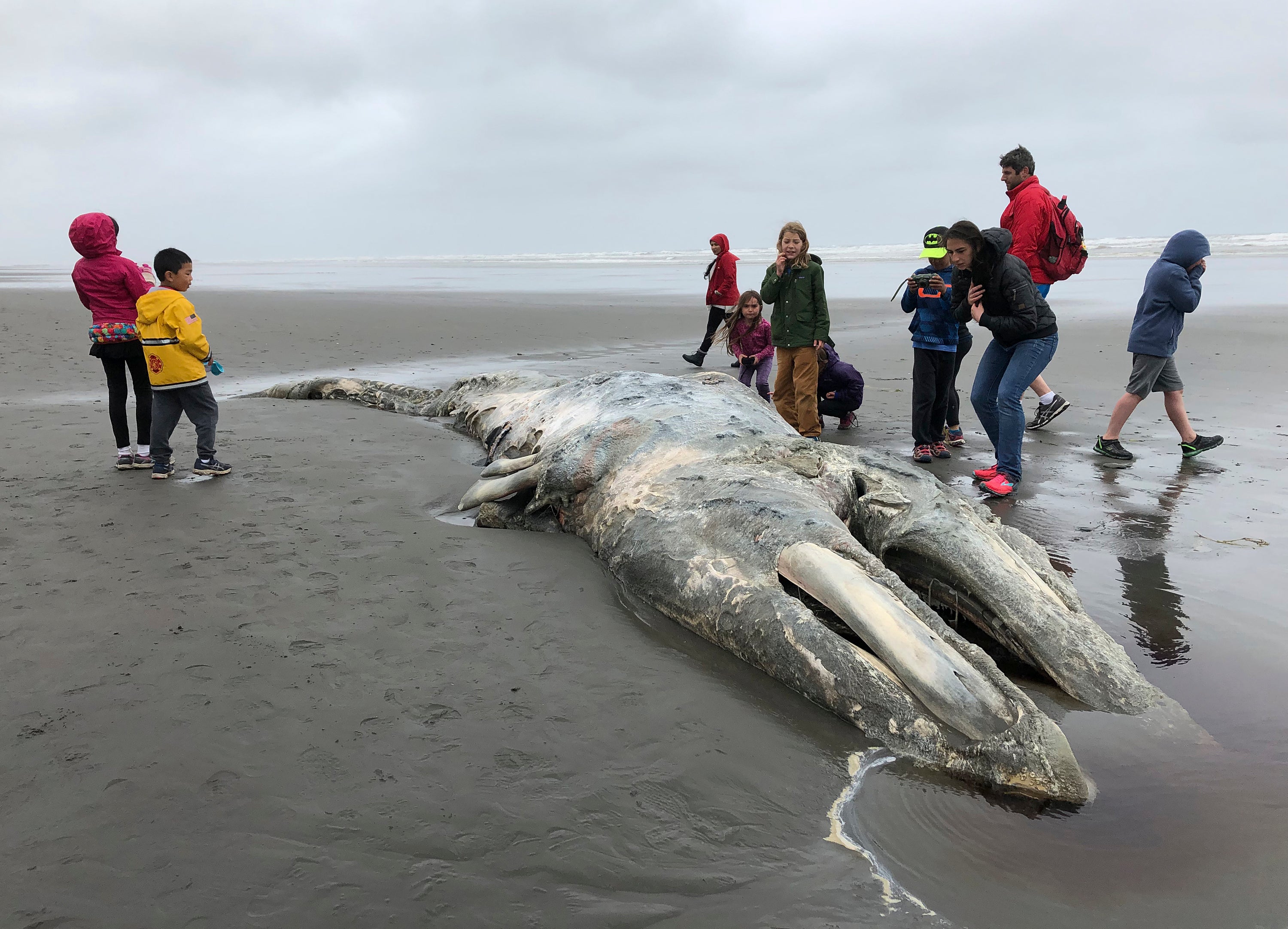 In this May 24, 2019 photo, teachers and students from Northwest Montessori School in Seattle examine the carcass of a gray whale after it washed up on the coast of Washington’s Olympic Peninsula, just north of Kalaloch Campground in Olympic National Park. Federal scientists on Friday, May 31 opened an investigation into what is causing a spike in gray whale deaths along the West Coast this year. So far, about 70 whales have stranded on the coasts of Washington, Oregon, Alaska and California, the most since 2000. (AP Photo/Gene Johnson)

SEATTLE  — U.S. scientists said Friday they will investigate why an unusual number of gray whales are washing up dead on West Coast beaches.

About 70 whales have been found dead so far this year on the coasts of California, Oregon, Washington and Alaska, the most since 2000. About five more have been discovered on British Columbia beaches. That’s a very small fraction of the total number of whales believed to have died, because most simply sink and others wash up in such remote areas they’re not recorded.

NOAA Fisheries on Friday declared the die-off an “unusual mortality event,” providing additional resources to respond to the deaths and triggering the investigation.

“Many of the whales have been skinny and malnourished, and that suggests they may not have gotten enough to eat during their last feeding season in the Arctic,” agency spokesman Michael

The eastern North Pacific gray whales were removed from the endangered species list in 1994, after recovering from the whaling era.

The population has grown significantly in the last decade and is now estimated at 27,000 — the highest since surveys began in 1967. That has raised questions about whether their population has reached the limit of what the environment can sustain. Another theory suggests that the loss of Arctic sea ice due to global warming is a culprit.

The whales spend their summers feeding in the Arctic before migrating 10,000 miles (16,000 km) to winter off Mexico. Though they eat all along their route, they are typically thinning by the time they return north along the West Coast each spring.

They eat many things, but especially amphipods, tiny shrimp-like creatures that live in sediment on the ocean floor in the Arctic. For many years, researchers noted that fewer calves tended to be born following years when the ice in the Chukchi Sea, north of the Bering Strait between Alaska and Russia, was late to melt. The whales had less time to feast because they couldn’t access the feeding area, and thus had less blubber to sustain them on their next migration.

Last year, though, the Artic was unusually warm. The whales weren’t blocked from the feeding area, and yet are still struggling this year. That has scientists wondering if the loss of sea ice has led to a loss of algae that feed the amphipods. Surveys show the amphipod beds moving farther north, said Sue Moore, a biological oceanographer at the University of Washington.

“The sea ice has been changing very quickly over the last decade or so,” she said. “The whales may have to shift to other prey, such as krill or other things they eat.”

In an average year, about 35 whales wash up in the U.S.

In 2000, more than 100 did, prompting NOAA to declare an “unusual mortality event” then as well. The resulting investigation failed to identify a cause. The die-off followed strong changes in ocean conditions in the mid-1990s, suggesting that warmer water patterns affected the availability of prey, but scientists were often unable to perform necropsies, Moore said.

“It’s sometimes very difficult to get to these whales in a timely fashion,” she said. “You can’t always get the kind of samples you would need for diagnostic reasons.”

Since then, researchers have built up an improved network of volunteers and have better educated the public to help report and respond to whale deaths, said Deborah Fauquier, veterinary medical officer at NOAA’s Office of Protected Resources. This time around, scientists have been able to perform necropsies on 20 of the whales, she said.

John Calambokidis, a research biologist with the Cascadia Research Collective, noted that as the whales search farther afield for food, they’ve entered areas where they’re not normally seen so often, including San Francisco Bay and Puget Sound. That puts them at higher risk of being struck by ships or entangled in fishing gear.

Four of the 10 gray whales found dead near San Francisco this year were struck by ships, and a number of shipping companies have slowed their vessels in the area to avoid collisions.  /muf