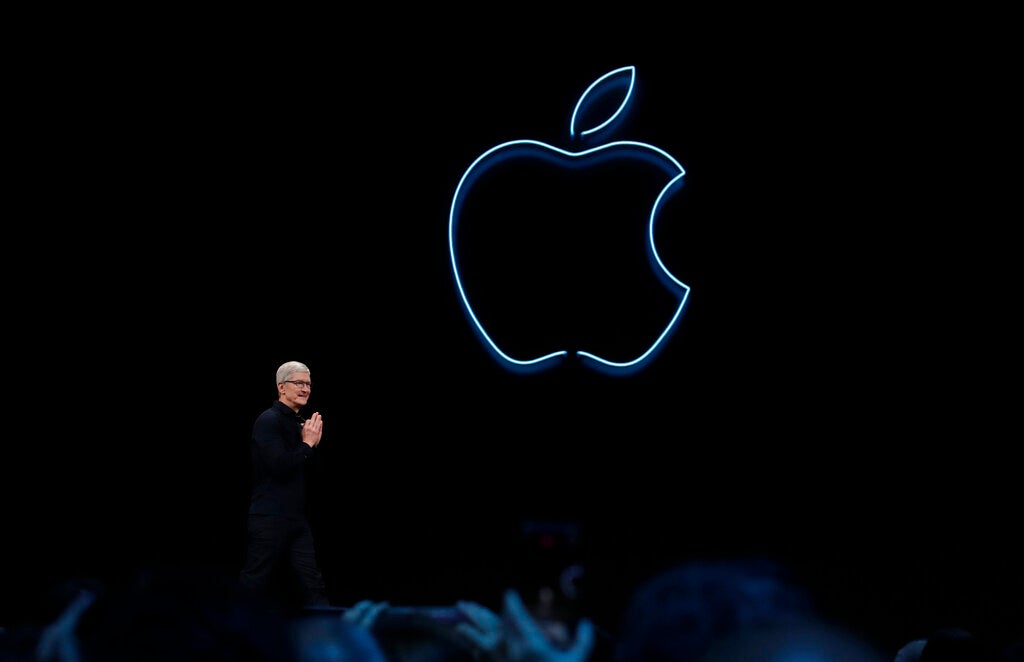 SAN JOSE, California — Apple, beset by falling iPhone sales, announced upcoming changes to its phone and computer software intended to highlight its new digital services and to further position it as a defender of personal privacy.

The revisions previewed Monday during a conference in San Jose, California, included a new feature that will let people log into apps and other services with an Apple ID instead of relying on similar sign-in options from Facebook and Google — two companies that mine data to sell advertising. Apple said it won’t collect tracking information about users from that service.

As part of that feature, Apple will also let users mask their true email addresses when signing into apps and services. That will involve faux email address that automatically forward to the user’s personal email. When the next free version of the iPhone software comes out this fall, Apple is also promising to give people the option of limiting the time apps can follow their locations and prevent tracking through Bluetooth and Wi-Fi signals.

The revisions are part of Apple’s ongoing attempts to separate itself from other technology giants, many of whom offer free services in exchange for personal data such as whereabouts and personal interests, which in turn fuels the advertising that generates most of their revenue. Apple, by contrast, makes virtually all its money selling devices and services, making it easier for CEO Tim Cook to embrace privacy as “a fundamental human right.”

Monday’s software showcase is an annual rite that Apple holds for thousands of programmers at the end of spring. This year, however, Apple is grappling with its biggest challenge since its visionary co-founder, Steve Jobs, died nearly eight years ago.

Although still popular, the iPhone is no longer reliably driving Apple’s profits the way it has for the past decade. Sales have fallen sharply for the past two quarters, and could suffer another blow if China’s government targets the iPhone in retaliation for the trade war being waged by Another potential problem looms for Apple. Regulatory complaints and a consumer lawsuit both question whether Apple has been abusing the power of its iPhone app store to thwart competition and gouge smaller technology companies that rely on it to attract users and sell their services.

Apple is trying to adapt by squeezing money from digital services tailored for the more than 900 million iPhones currently in use.

And the iPhone remains its marquee product. The latest version of its iPhone operating software, iOS 13, manages to offer both privacy features and a “dark mode” for the screen — a feature already available on Macs.

Apple executives also claimed that iOS 13 will open apps faster and features a new version of the Face ID system will unlock your phone 30 percent faster.

Apple Maps will get the biggest makeover of any of the company’s built-in apps. Beginning with iOS 13 the maps will include granular street and place data that Apple says it collected with street and aerial footage — tactics its largest mobile app rival Google has been using for years.

Apple also unveiled several new apps for its smartwatch, including independent apps that don’t rely on the iPhone in another sign of the company’s determination to lessen its dependence on that product. The App Store will be available on the watch, making it possible for people to find and download apps right on their watch — expanding the availability of purchases that generate commissions for Apple.

The iPad will also get its own operating system instead of piggybacking on the iPhone software as Apple tries to cater to consumers who would like the tablet to be able to do more of the things a laptop computer can do.

In its laptop and desktop businesses, Apple is breaking up its iTunes software for computers into three apps: Apple Music, Apple Podcasts and Apple TV. Apple debuted iTunes 16 years ago to sell and manage digital music for the iPod, which paved the way for the iPhone.

Apple has already de-emphasized iTunes on the iPhone and iPad, but now it will do the same on the Mac as well later this year. ITunes will still be available on Macs using older versions of the operating system, as well on all machines running on Microsoft’s Windows.