NASA to open International Space Station to tourists from 2020 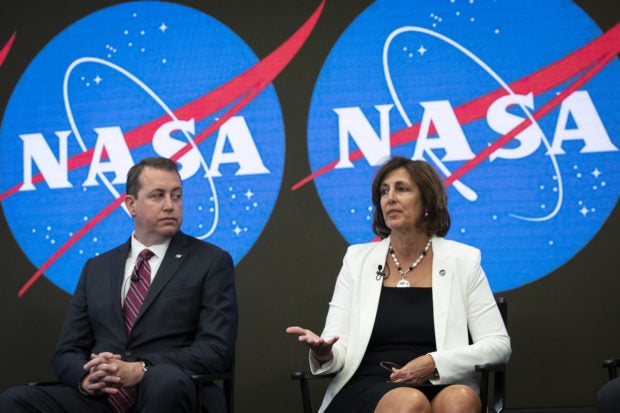 (L-R) NASA Chief Financial Officer Jeff DeWit looks on as ISS Deputy Director Robyn Gatens speaks looks on during a press conference to address the opening of the International Space Station to expanded commercial activities, at the Nasdaq MarketSite, June 7, 2019 in New York City. The efforts are intended to broaden the scope of commercial activity on the space station beyond the ISS National Lab, which is limited to research and development. The International Space Station originally launched into orbit in 1998 and has been continually inhabited since November 2000. AFP

NEW YORK — NASA said last Friday it will open up the International Space Station to business ventures including space tourism as it seeks to financially disengage from the orbiting research lab.

Price tag? Tens of millions of dollars for a round trip ticket and $35,000 a night.

“NASA is opening the International Space Station to commercial opportunities and marketing these opportunities as we’ve never done before,” NASA chief financial officer Jeff DeWit said in an announcement made at the Nasdaq stock exchange in New York.

There will be up to two short private astronaut missions per year, said Robyn Gatens, deputy director of the ISS.

The missions will be for stays of up to 30 days. As many as a dozen private astronauts could visit the ISS per year, NASA said.

These travelers would be ferried to the orbiter exclusively by the two US companies currently developing transport vehicles for NASA: SpaceX, with its Crew Dragon capsule, and Boeing, which is building one called Starliner.

These companies would choose the clients — who will not have to be US citizens — and bill for the trip to the ISS, which will be the most expensive part of the adventure: around $58 million for a roundtrip ticket.

That is the average rate the companies will bill NASA for taking the space adventurers up to the ISS.

Neither Dragon nor Starliner are ready. Their transport capsules are supposed to be ready in late 2019 but the timetable depends on the results of a series of tests. So the private missions will have to wait until 2020 at the earliest.

The tourists will pay NASA for their use of the station, for food, water and use of the life support system.

That will run about $35,000 per night per astronaut, said DeWit.

That does not include internet, which will cost $50 per gigabyte.

The space station does not belong to NASA. It was built along with Russia starting in 1998, and other countries participate in the mission and send up astronauts.

But the United States has paid for and controls most of the modules that make it up.

The new space tourists to the ISS will not be the first: US businessman Dennis Tito had that honor in 2001. He paid Russia around $20 million for the trip.

Others followed in his footsteps, the last being Cirque du Soleil founder Guy Laliberte in 2009.

Since 2011, Russian Soyuz rockets have been the only way to get to the space station. And they have transported only space agency astronauts, in addition to Russian cosmonauts.

There are usually three to six crew members on the ISS at any given time. Right now it is home to three Americans, two Russians and a Canadian.

The policy change announced Friday includes the opening of parts of the ISS to private sector companies for commercial and marketing activity.

This would include startups developing techniques for building materials in conditions of weightlessness.

Fiber optic cables, for example, are of extraordinary quality when manufactured in microgravity.

The idea is to develop the space economy in the hope of seeing the private sector take over the ISS, which the United States hopes to stop financing in the late 2020s.

“We want to be there as a tenant, not as the landlord,” NASA administrator Jim Bridenstine said in April.

The agency wants to free up funds for a return to the moon mission called Artemis in 2024 and for sending the first humans to Mars, perhaps in the 2030s.

But it remains unclear if commercial activity in earth orbit is profitable because it is still so expensive to get up there in the first place.

In the end, NASA appears to have changed its stance in order to meet its huge budget needs.

When Russia announced it was taking Tito to the space station, NASA was at first opposed to such a mission. And it ended up sending the Russians a bill for his stay on the ISS.