A troop of monkeys died from suspected heatstroke in India as scorching temperatures that have lasted more than a week take a mounting toll on humans and animals, media reports said Saturday, June 8.

Vast swathes of the country have been sweltering in temperatures that have risen to over 50 degrees Celsius in the Rajasthan state. 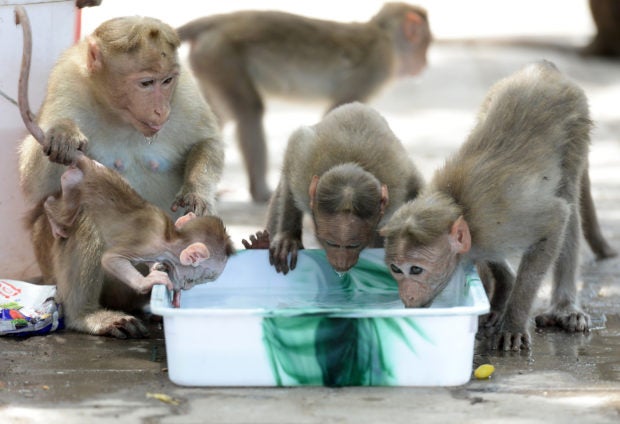 Monkeys drink water from a bucket on a hot day. Image: AFP/Arun Sankar

District forest officer P. N. Mishra said the primates were believed to have fought with a rival troop over access to a water source.

“This is rare and strange as herbivores don’t indulge in such conflicts,” Mishra told NDTV network.

An autopsy said heatstrokes likely caused the deaths. Tigers have also been reported to be moving out of forest reserves into villages in search of water, causing alerts.

Temperatures touched 50.3 degrees Celsius in the Rajasthan town of Churu last week, just shy of India’s record of 51 degrees Celsius. The heatwave has exposed falling water levels in underground reservoirs and there have been a number of human deaths reported.

In Jharkhand state, a man stabbed six others after he was stopped from filling extra water barrels at a public tank, media reported Saturday.

On June 7, a 33-year-old man died after a similar fight in Tamil Nadu state.

The Indian peninsula has seen a drastic change in rainfall patterns over the past decade, marked by frequent droughts, floods and sudden storms.

Kerala in the south got some respite from heat Saturday after annual monsoon rains arrived, more than a week later than expected.

Farmers across South Asia depend rely on the four-month monsoon season due to a lack of alternative sources of irrigation. RGA/JB

DOH warns vs heatstroke in these hot, humid times