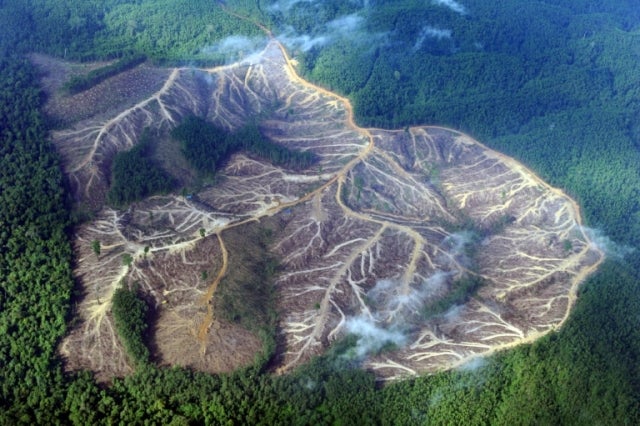 Cutting rainforests down provides a double threat to the environment: it removes a vital sink for planet-warming gases in our atmosphere and produces more carbon dioxide, methane and nitrous oxide used and expelled by industrial-scale agriculture. Image: ROMEO GACAD – AFP/File

A rainforest area the size of Spain will be destroyed by firms growing consumer staples like palm oil in the decade to 2020, industry’s self-imposed deadline to end deforestation, Greenpeace said Tuesday.

Some of the world’s largest consumer brands — including Nestle and Unilever — had pledged in 2010 to reach net zero deforestation within a decade through “responsible sourcing” of cattle, palm oil, soya and other commodities.

But since that pledge was signed, the pace of deforestation linked to commodities has increased “dramatically” and helped destroy at least 50 million hectares of forest, according to a new analysis carried out by Greenpeace.

“These companies are destroying our children’s future by driving us towards climate and ecological collapse,” said Anna Jones, global project lead for forests at Greenpeace UK.

“They’ve wasted a decade on half-measures and in that time, vast areas of the natural world have been destroyed.”

Since 2010, the area of Brazilian rainforest planted with soya — which is used to feed animals sold for meat — has increased by 45 percent.

In Indonesia, palm oil production is up three quarters since the start of the decade and the footprint of cocoa production in the Ivory Coast has surged 80 percent, said the charity.

Bob Watson, chair of the UN’s IPBES biodiversity panel that warned in April that one million species are threatened with extinction, said in a foreword to Tuesday’s report that the world’s agricultural system is “broken”.

The 2015 Paris agreement on climate aims to limit global temperature rises to “well below” two degrees Celsius (3.6 Farenheit) and to 1.5C if possible.

To do so, nations must drastically reduce their greenhouse gas emissions, yet those emissions continue to rise year-on-year.

Rainforests currently absorb up to 30 percent of all manmade greenhouse gas emissions and are vital hotspots of biodiversity, containing plants from which around a quarter of all medical drugs are made.

Cutting them down provides a double threat to the environment: it removes a vital sink for planet-warming gases in our atmosphere and produces more carbon dioxide, methane and nitrous oxide used and expelled by industrial-scale agriculture.

The global meat industry alone is estimated to account for as much as 18 percent of all manmade emissions. Meat consumption is forecast to soar 76 percent by mid-century and emissions from livestock expected to rise in lockstep.

In addition, labyrinthine global supply chains, including processing and shipping, pump ever more greenhouse gases into the air with very little oversight from governments or monitors.

The most recent assessment by Global Forest Watch said the world lost tree cover of 24.8 million hectares in 2018, an area around the size of Britain.

Greenpeace accused firms of failing to follow through on their pledges to reduce the ruinous environmental impact their business plans were having.

“They should be in crisis talks right now, but they’re still trying to grow demand for products that will drive forest destruction even further,” said Jones.

The Consumer Goods Forum, which meets this week in Vancouver, told AFP that its members stood by their promises to work towards net zero deforestation.

“But over the last nine years we have also learned that the forces driving deforestation are more complex than almost any stakeholder realized in 2010,” it said. NVG