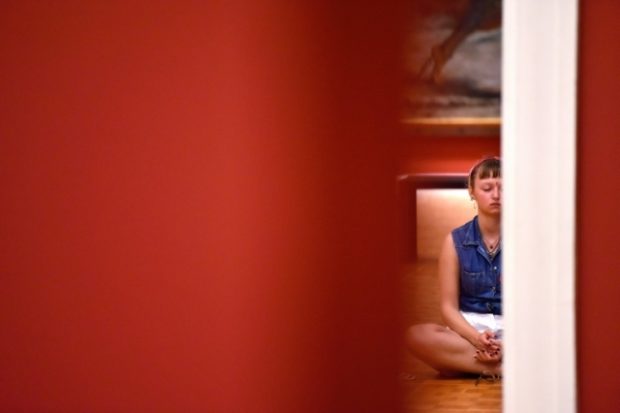 Helped by the growth in apps, a survey by the National Center for Health Statistics found 14 percent of Americans had meditated in 2017, a threefold increase in five years. Image: AFP/Loic Venance

From the Zen capital of LA to the Champs Elysees comes the calming voice of a British Buddhist monk-turned entrepreneur, introducing American-style online mindfulness to the stressed-out French.

“Relax your muscles, breathe,” Andy Puddicombe, the bronzed co-founder of the app Headspace, intones by videoconference to a roomful of participants gathered on Paris’s ultra-chic shopping artery.

The Englishman and his French team are hoping to replicate the US success of Headspace with a French-language version, in a market where New Age philosophies from the “Anglo-Saxon” world are often viewed askance.

Its path has been helped by the success of French mindfulness app PetitBambou, which launched in 2015 — five years after Headspace — and claims more than three million users in France for its free and paid platforms.

Both apps use guided meditations for an array of situations — from coping with bereavement to just getting through a difficult day at work — with support from online counselors, funky animations and videos.

In France as in the United States, Britain and elsewhere, companies have been signing up to subscriptions for their employees.

PetitBambou says it has secured “hundreds of licenses” from companies such as Deloitte and railways group SNCF and that it has nothing to fear from Headspace, which along with rival Calm has come to dominate the US market.

In a Paris studio, working on voice recordings for the app, PetitBambou co-founder Benjamin Blasco said his company was in any case aiming for the long haul.

“We broke even three years ago. We will not sacrifice anything on the altar of marketing,” Blasco told AFP.

“We do not try at all costs to keep people in the app,” he said, but to solicit a two-way exchange and tailor therapy to the user’s needs. “Meditation is not a miracle tool, rather a mental hygiene: what’s essential is regular practice.”

Investors are certainly buying in to the concept. Calm — which like Headspace was co-founded by a British emigre to California, Michael Acton Smith — raised $88 million from a fundraising round in February.

That gave it a valuation of $1 billion, which Smith noted made Calm the first “mental health unicorn.”

“Unicorns” are start-up companies with a billion-plus valuation.

But like Headspace, Calm has its sights set further afield. In Britain it has enlisted actor and TV presenter Stephen Fry to record bedtime stories for use on a popular feature that helps users get to sleep.

“America is only 4.5 percent of the total global population, so there are a lot of other people that can enjoy the product and help the company grow,” Smith told CNBC after the investment round.

According to figures from Marketdata, the US mindfulness market as a whole including the dozens of apps on offer topped $1 billion in 2017, and should double that by 2022.

Helped by the growth in apps, a survey by the National Center for Health Statistics found 14 percent of Americans had meditated in 2017, a threefold increase in five years.

Headspace alone says it has 50 million users worldwide, and has raised $75 million from investors in total, despite marketing a product that preaches “digital detox.”

The paradox is not lost on Richard Pierson, the company’s other British co-founder.

“Although there is the irony that the phone is probably causing us a lot of our stress, our hope is that by using Headspace, you’ll be able to teach yourself the techniques that you need to learn in order to be able to use your phone in a more mindful way,” he said at the Paris launch.

Many of the techniques in mindfulness apps are rooted in Buddhism and have long been familiar to practitioners in Asia. But what, if any, science underpins the apps?

Boosters got new backing with a US scientific study released in late April that looked at the effects of an experimental mindfulness app aimed at smokers.

The app helped many participants cut their smoking or give up altogether, by helping to rewire impulses in the brain linked to addiction.

The world of mindfulness “has become a business, but there is an ethical dimension,” commented Dominique Steiler, a professor at the Grenoble Ecole de Management who specialises in the “well-being” economy.

Apps “are a good way to get started,” but users should be encouraged ultimately to sever the smartphone cord and meditate alone, he said. CC

An extra step for your mental health: Mindfulness apps