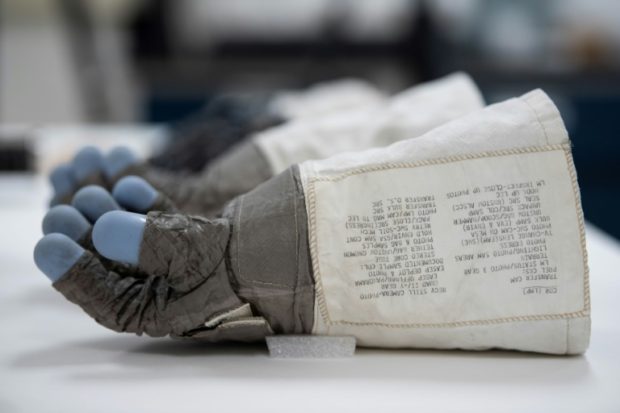 The blue silicon fingertips of Armstrong’s glove have begun to degrade, a process that for now remains invisible to the naked eye. Image: AFP/Eric Baradat

Lying on a workshop counter that is closed to the public at the Smithsonian Air and Space Museum’s annex near Washington Dulles airport, Neil Armstrong’s gloves look almost as good as new.

You can hardly tell they made a trip to the Moon and back 50 years ago.

To their side is the slightly yellowed “Snoopy Cap” (formally known as a “communications carrier”) worn by crewmate Buzz Aldrin.

The space suit worn by Michael Collins, Apollo 11’s third astronaut, is in near mint condition. 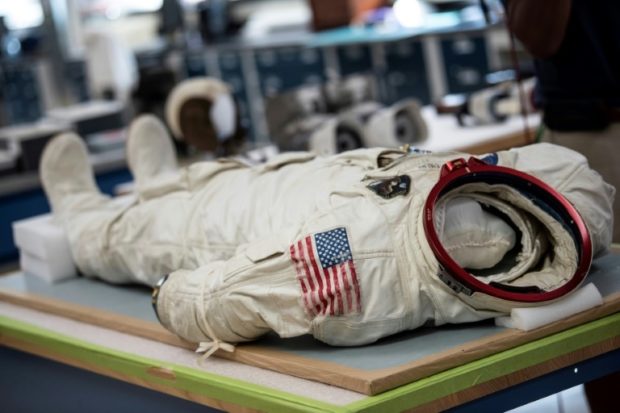 But the blue silicon fingertips of Armstrong’s gloves have begun to degrade, a process that for now remains invisible to the naked eye, as has Collins’ suit.

“After 50 years, we do know that the rubber is breaking down, and becoming a little bit stiff and brittle,” Lisa Young said, an objects conservator for the museum.

“It is inevitable. These were made for one-time use, get to the moon and back,” Young added, who was only a child when Armstrong and Aldrin touched down on lunar soil on July 20, 1969. “We know the rubber bladders were only supposed to last six months, and they’ve lasted now 50 years.” 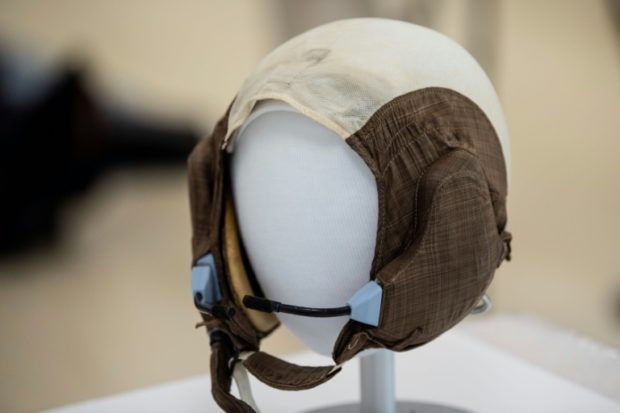 When AFP visited this workshop on Friday, June 28, Young and her colleagues explained their work to delay the degradation of these objects, venerated by generations of space enthusiasts.

Young is intimately familiar with Armstrong’s spacesuit. After touring the United States in the wake of the mission, it remained on display at the main branch of this museum, in Washington proper, until 2006, but has been undergoing restoration work since then.

It will be back on display from July 16 onwards, the anniversary of Apollo 11’s departure from Earth. “I am sad, but I am kind of relieved,” admitted Young. “It’s been a long time and a lot of projects and I’m happy for the public to see it again.”

The suits are made from 21 distinct layers and it’s not possible to cut or separate them.

The outer layer is made from Teflon-coated fiberglass known as “beta cloth” that was built to protect its wearer from micrometeorites and radiation, though it yellows over time with exposure to light.

Nevertheless, Young is confident of being able to keep it in near pristine condition.

The adhesive materials between layers are trickier.

Using X-rays and CT-scans, the team realized they were degrading. There is also a chemical reaction between the copper alloy of the zipper and the rubber lining, catalyzing the decomposition process. 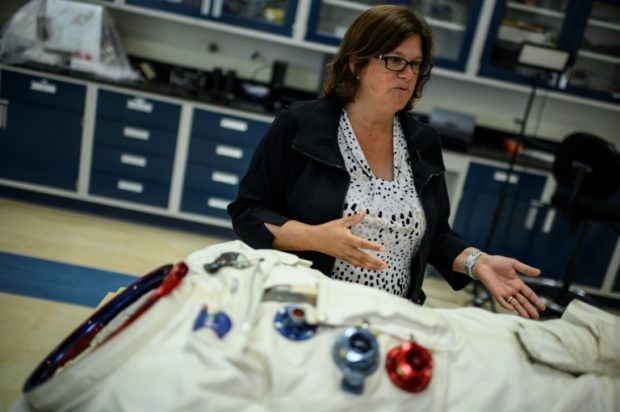 The restorers use solvents to clean the metal parts, lay down stitches to stabilize the outer fabric (but not if the damage dates to the mission). And they vacuum up the dust that has settled from the museum.

Armstrong’s suit will be housed in a display case that is kept at a low temperature and humidity and protected from harmful light.

Finally, tailor-made mannequins support the fibers from within.

NASA engineers at the time believed they had chosen the best materials possible for the mission, though they did not really know the composition of the lunar soil.

“Lunar dirt is much more aggressive than we had anticipated,” Cathleen Lewis said, the museum’s curator of space suits.

She points out a pair of lunar boots covered in stainless steel fibers and with blue silicon rubber soles that were worn by Gene Cernan, the last man on the Moon, to show the black layer of dirt that still cakes it from his three-day stay.

Seen under a microscope, “you will find granules of lunar dust embedded in and eroding through the stainless steel fibers,” she said.

“That is one of those lessons learned” from the era of Apollo, she added. HM/JB

TOPICS: Apollo, Astronauts, moon mission, NASA, Neil Armstrong, preservation, Smithsonian Air and Space Museum
Read Next
‘DeepNude’ app for ‘undressing’ women shut down after flak
EDITORS' PICK
Motostrada expands by handing over ‘Trident’ and adding new ‘Horseman’ to its growing business
WHO: Indoor airborne spread of coronavirus possible
No arrests to be made on 1st day of allowed pillion riding for couples — HPG
Water remains our saving grace right now
House panel set to meet for possible decision on ABS-CBN franchise bid
Digital hunt for Hyun Bin: 5 challenges for Smartees
MOST READ
‘I will always speak up for you’: Server on defending Fil-Am family from racist rant
‘Nouveau’: Agot Isidro hits Jinkee Pacquaio’s show of luxury Hermes, Louis Vuitton bikes
Bela Padilla on being tagged a Diehard Duterte Supporter: ‘Nope, not at all’
Solon withdraws support for ABS-CBN franchise renewal
Don't miss out on the latest news and information.