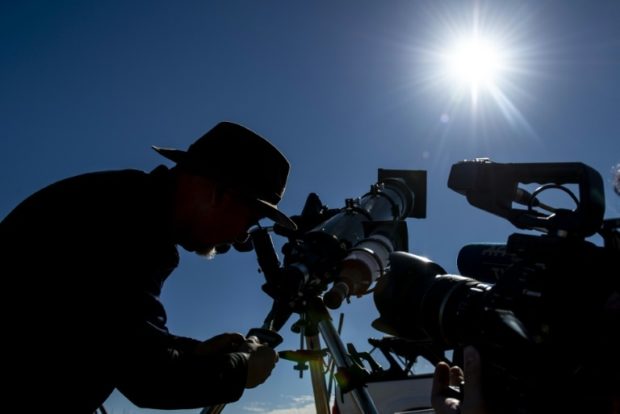 An astronomer looks at the sun through a telescope on the eve of a solar eclipse at La Higuera in Chile’s Coquimbo Region on July 1, 2019. Image: AFP/Martin Bernetti

Day will briefly turn to night over large parts of Chile and Argentina as a total eclipse of the Sun plunges a vast swath of the southern Pacific and the cone of South America into darkness.

Both countries will be under the narrow, 6,000-mile long band that will experience a total eclipse when the Moon will completely block the Sun.

According to Chilean astronomers, the breathtaking natural phenomenon will begin on Tuesday, July 2, 13:01 (17:01 GMT) in the Pacific Ocean and a 95-mile (150-kilometer-wide) band of total darkness is set to reach Chile’s coast 4:38 p.m. (20:38 GMT), then cross into southeastern Argentina.

People in some areas under the path of the eclipse will experience more than two minutes of total darkness, the Chilean Foundation of Astronomy said. 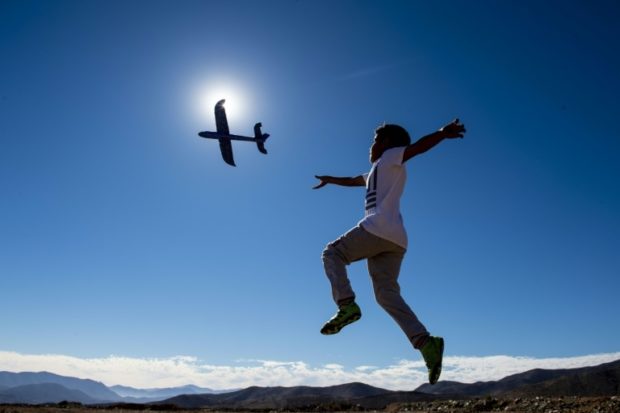 A boy plays with a toy glider on the eve of a solar eclipse, in La Higuera on the edge of the Atacama desert. Image: AFP/Martin Bernetti

“There is a lot of expectation. This is a historic event in the region,” said Catalina Henriquez, who runs an astro-tourism agency in Vicuna, a town 280 miles north of Santiago renowned for clear skies that have made it Chile’s “astronomy capital.”

Vicuna is part of the Coquimbo region that is dotted with observatories equipped with high-powered telescopes and where the eclipse will be strongest.

An estimated 300,000 tourists have flocked to the region where dryness, crystal-clear air and low light pollution has created a stargazers’ paradise.

Matias Badilla, 19, said his family had been anticipating the event for years. “It is something we have been planning for a long time. For us, to see it so closely in such a beautiful place is something that we couldn’t miss.”

Thousands of people have descended on the nearby town of La Higuera, located on the so-called “path of totality,” where the eclipse is predicted to last longest, around 2 minutes and 36 seconds. 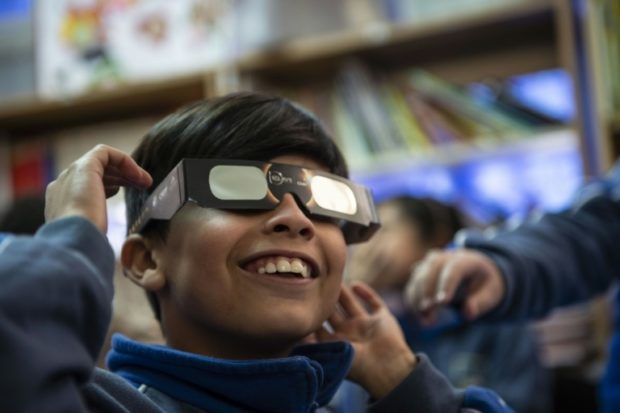 A schoolboy tries on special sunglasses at the Pedro Pablo Munoz school in La Higuera, Coquimbo Region, Chile, on the eve of a solar eclipse. Image: AFP/Martin Bernetti

Chilean President Sebastian Pinera and several members of his cabinet will watch the event from the La Silla Observatory, on a mountain peak towering 2,400 meters over the Atacama Desert, operated by the European Southern Observatory.

The observatory and its fleet of powerful telescopes will live stream the event on the internet and have also opened to the public, hosting school tours along with talks and workshops.

“The 2019 total solar eclipse will last about 1 minute and 52 seconds from the La Silla summit. The Sun will be setting just as the entire eclipse ends and the peak of totality will happen when the Sun is a mere 13 degrees above the horizon from the view of La Silla Observatory,” the observatory said.

Further south, the capital Santiago will experience a near-total eclipse.

Solar eclipses happen when the Sun, the Moon and Earth line up, allowing the Moon to cast its shadow on Earth.

The next total eclipse will be visible in southern Chile on Dec. 14, 2020. HM/JB

TOPICS: Argentina, Chile, Moon, Solar Eclipse, South America, Sun
Read Next
Recordings of Apollo 11 moon landing to be auctioned at Sotheby’s
LATEST STORIES
DAY6 is for everybody
Mos Burger to open in Manila; teases with a pop-up
In ‘Jojo Rabbit,’ Comedy and Drama Collide
How to help the Taal evacuees
Margot Robbie talks about filming ‘Bombshell’s’ disturbing sexual harassment scene
MOST READ
OSG plea to revoke ABS-CBN franchise ‘a duplicitous move’ – Lacson
It’s too early to present Duterte’s ‘legacy’ – Lacson
End of his agony? SC rules in favor of Espinosa, orders promoter heirs to pay boxing legend
Mayweather beats Pacquiao, Canelo for ‘Fighter of the Decade’
Don't miss out on the latest news and information.