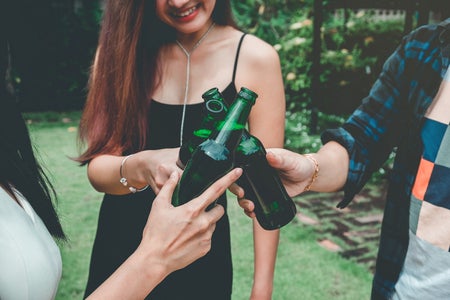 New research has found that quitting alcohol may not only improve a woman’s physical health but also her mental well-being.

Carried out by researchers at the University of Hong Kong (HKU), the new study looked at 10,386 adults with an average age of 49.3, 56% of whom were women.

The physical and mental well-being of the participants was measured using a survey with a score that ranges from 0 to 100, with higher scores indicating better health; to validate the results, the researchers compared this data with responses from a representative survey of 31,079 American adults conducted by the National Institute on Alcohol Abuse and Alcoholism in the United States.

The findings, published in CMAJ (Canadian Medical Association Journal), showed that men and women who were lifetime abstainers from alcohol had the highest level of mental well-being at the start of the study.

They also found that for women who were moderate drinkers and who quit drinking during the study, quitting was linked to improvements in mental well-being among both Chinese and American participants, with levels of mental well-being close to those of lifetime abstainers within four years of quitting.

However, starting drinking and persistent moderate drinking during the four years were not associated with better mental or physical well-being.

“More evidence suggests caution in recommending moderate drinking as part of a healthy diet,” commented study author Dr. Michael Ni. “Global alcohol consumption is expected to continue to increase unless effective strategies are employed. Our findings suggest caution in recommendations that moderate drinking could improve health-related quality of life. Instead, quitting drinking may be associated with a more favorable change in mental well-being, approaching the level of lifetime abstainers.” JB