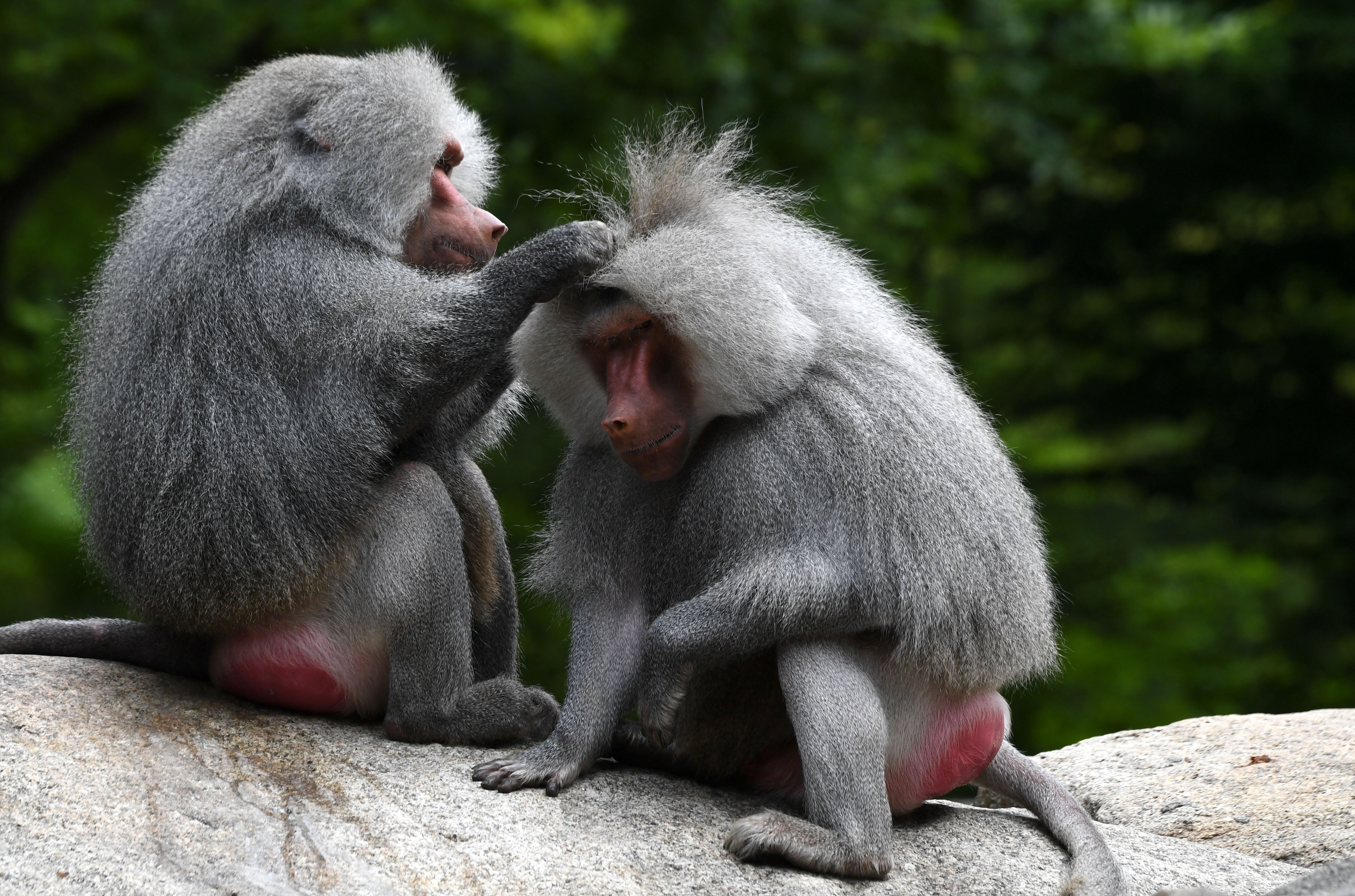 Baboons groom in their enclosure of the zoo Hellabrunn in Munich, southern Germany, on July 12, 2019. – Organisers of this year’s Gay Pride week in Munich have a group of rather wild partners — penguins, giraffes and lions at the city zoo where tours are being run about same-sex love in the animal kingdom. (Photo by Christof STACHE / AFP)

MUNICH — Organizers of this year’s Gay Pride week in Munich have a group of rather wild partners — penguins, giraffes and lions at the city zoo where tours are being run about same-sex love in the animal kingdom.

The Munich zoo has joined Pride week with an unusual look into the intimate lives of all creatures great and small, seeking to boost tolerance among humans.

“It is important for us to talk about” homosexuality in the animal kingdom and show that same-sex love has its place in Nature, said Munich zoo spokesman Dennis Spaeth.

“Because unfortunately in Germany we see more and more people from the reactionary right attacking LGBTQI rights.”

While even mostly-Catholic Bavaria has grown more accepting and lawmakers legalized gay marriage in 2017, non-heterosexuals are sometimes still a target for violence.

In the safe confines of the zoo, the first stop on the Pride tour is the giraffes. The blotchy animals spare visitors only occasional curious glances from behind their long eyelashes as they enjoy a meal of hay.

“Giraffes are bisexual. In some groups, 90 percent of the acts observed are in fact homosexual in nature,” explained biologist Guenter Strauss.

A few enclosures down, there is little to distinguish a male-male couple of black-faced Humboldt penguins squatting together from other, mixed pairs.

That is until the guide points out that with no egg to care for, the pair has taken to brooding a rock instead.

This is no one-off fling, as “penguins conduct homosexual relationships that can last a whole lifetime, something very rare in the animal kingdom,” said Strauss.

In fact, hundreds of animal species, from elephants to snakes and birds, display homosexual behavior.

But unlike most humans, the sexual preference of our four-legged or feathered friends is often quite fluid.

“Among people, we grow up with a specific sexual orientation. That’s often not true for animals,” said Strauss.

“They are in fact bisexual. They adopt certain sexual behavior at specific moments.”

One case in point are lions, and the zoo’s male big cat greets the group with a loud roar.

“Eight percent of sex acts among lions are homosexual. As for lionesses, they only show lesbian behavior when they’re kept in captivity,” he explained.

While same-sex love among animals is commonplace, the topic was long a taboo for scientists of more hidebound eras.

“On one expedition to the South Pole at the start of the 20th century, a doctor saw males (penguins) copulating — but he left out the pages dealing with the behavior when he published the results of his research,” Strauss recounted.

Considered unpalatable back then, the valuable pages were only rediscovered “eight or nine years ago” in a library in Britain, he added.

Times have changed since then.

London Zoo, for its contribution to Pride week, mounted a banner above its penguin beach, declaring: “Some penguins are gay. Get over it,” a nod to a human anti-homophobic campaign. /muf