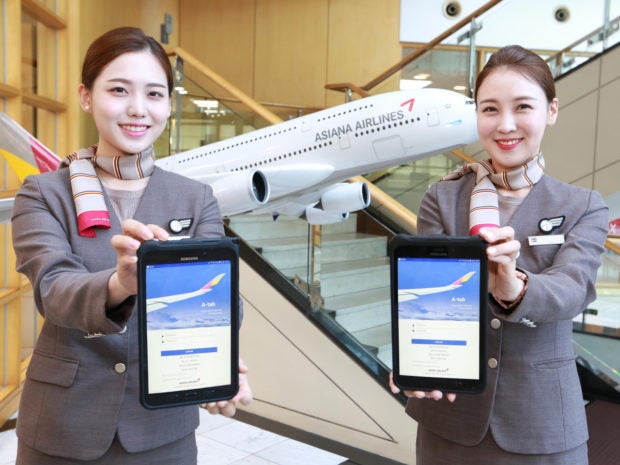 Asiana Airlines via The Korea Herald

SEOUL — South Korea’s full-service carrier Asiana Airlines said Monday that it has adopted a smart work platform called A-tab for its cabin crew to increase their work efficiency and convenience.

The system,which works on a tablet PC, allows crew members to easily and conveniently check their work schedule, information on flights, work manual and also hand in work-related reports, the air carrier said.

Some 4,000 cabin crew members will be given tablet PCs equipped with the system by the weekend.

RELATED TOPICS
The Best Samsung Tablets, Surface Pro and Ipads
The Best Cheap Tablets for Kids in 2019
Our Top Choices for the Best Tablet for Reading

“Instead of having to carry around stacks of paper documents, the introduction of A-tab will help the cabin crew to pack light and also increase the work efficiency,” an Asiana Airlines crew member said.

In January, the air carrier provided its pilots with tablet PCs with an application that works on a system called EFB, which helps them to easily view the service manual, charts and flight performance.

After test-operations of EFB with pilots who fly Boeing 747 aircrafts, the firm plans to expand its application to others operating all plane models.

“Asiana has been putting efforts to introduce a system based on the needs of employees, as well as to solve their problems. We will continue to improve work efficiency for our employees through big data-driven IT solutions,” said an Asiana Airlines official.