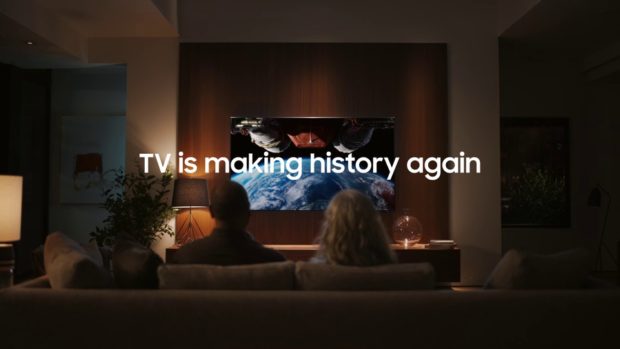 On July 20, 1969, American astronauts Neil Armstrong and Buzz Aldrin travelled to space and took the first steps on the moon while the world watched one of mankind’s greatest achievements. In celebration of the 50th anniversary of the Apollo 11 moon landing, Samsung launched “Making History”—a QLED 8K TV commercial and a multi-platform campaign with CNN Films. Samsung makes TV history once again by pushing the boundaries of technology with QLED 8K, now allowing consumers to watch video content in the highest resolution this category has ever seen.

The global leader in TV for the past 13 years, Samsung remains committed to bring individuals and families together to witness the world’s groundbreaking moments in their homes. The company continues to make TV history, pushing the boundaries of technology even further as it revisits the first moon landing for today’s generation to see using the latest QLED 8K technology.

‘APOLLO 11’ is a cinematic event that takes viewers on NASA’s historic mission led by astronauts Neil Armstrong, Buzz Aldrin, and Michael Collins, that first put men on the moon 50 years ago.

Kelly, who spent a total of 340 days in space, got the chance to relive this once-in-a-lifetime experience through upscaled footage viewed on a Samsung QLED 8K. “What I’m looking at brings back the exact images that I saw in space, even the scratches on the windows can be seen. The resolution and clarity of this 8K TV is simply amazing. The amount of detail makes it seem like I’m back there in space,” he shared.

Additionally, Samsung has also sponsored a three-part digital video series tied to the anniversary. This CNN editorial endeavor will spotlight a new generation of women leaders who are determining where the next great discoveries will be made, developing the groundbreaking technology to send humanity to the farthest reaches of the universe, and tapping a younger, more diverse recruiting pipeline that is opening doors for the next crop of dreamers.

“For years, TV has played an important role in letting viewers experience the most significant events in the world. With the recent launch of our QLED 8K TV in the country, we’re very excited to introduce Filipinos to a whole new level of television viewing that will make them enjoy revolutionary moments like never before,” said Lauro Guevara, head of product marketing for TV and audio.

Join Samsung as they take one giant leap for reality with its QLED 8K TV and witness the celebration of the first moon landing in never-before-seen clarity and richness. View the ‘Making History’ video here and visit https://www.samsung.com/ph/explore/samsung-within/innovation/one-giant-leap-for-reality/ to know more.