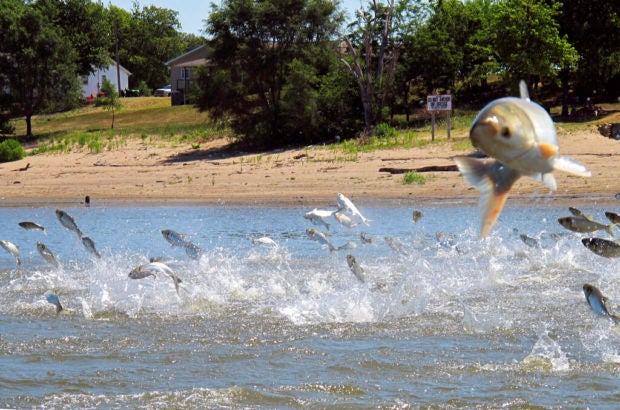 In this June 13, 2012, file photo, Asian carp, jolted by an electric current from a research boat, jump from the Illinois River near Havana, Illinois. A newly released study says if Asian carp reach Lake Michigan, they probably would find enough food to spread far and wide. Some experts have questioned whether there’s enough plankton in the lake to sustain the invasive carp away from shoreline areas. But the new report released Monday, Aug. 12, 2019, by University of Michigan scientists says despite a drop-off of plankton caused by exotic mussels, the voracious carp could feed on other organic material when venturing into deeper waters. (AP Photo/John Flesher, File)

TRAVERSE CITY, Michigan — Asian carp are likely to find enough food to spread farther if they establish breeding populations in Lake Michigan, reinforcing the importance of preventing the invasive fish from gaining a foothold, scientists said in a paper released Monday.

A study led by University of Michigan researchers found that despite a drop-off in plankton, the tiny plants and animals on which bighead and silver carp typically feed, the lake has enough dietary options to sustain individual fish that venture away from nutrient-rich shoreline areas where most would congregate.

That improves their prospects for colonizing large sections of Lake Michigan and eventually spreading to the other Great Lakes, said Peter Alsip, an ecological modeling data analyst and lead author of the paper published in the journal Freshwater Biology.

“Our study indicates that the carp can survive and grow in much larger areas of the lake than previous studies suggested,” Alsip said.

Asian carp were imported in the late 1960s to gobble up algae in Deep South sewage lagoons and fish farms. They escaped into the Mississippi River and have migrated northward, branching into dozens of tributaries.

Prolific breeders and voracious eaters, the invaders compete with native fish for food and habitat. They have become the primary fish species in the Illinois River, which forms part of an aquatic pathway that leads to Lake Michigan through a Chicago-area network of rivers and canals.

Authorities have long debated how to keep them out of the Great Lakes, where fishing is a $7 billion industry. The U.S. Army Corps of Engineers this year proposed equipping the Brandon Road Lock and Dam near Joliet, Illinois, with noisemakers, electric barriers and other deterrents at a cost of at least $778 million.

Some experts have questioned whether the carp would venture from shallow bays and wetland areas into the lake’s deeper waters, where filter-feeding zebra and quagga mussels have coated the bottomlands and consumed huge volumes of plankton and nutrients such as phosphorus.

But the University of Michigan team said earlier studies underestimated the carps’ dietary flexibility. They have shown a willingness to feed on other organic material drifting in the water column — including excrement from the mussels, Alsip said.

He and his colleagues modeled levels of food availability and water temperatures to estimate the well-being of bighead and silver carp when eating mixtures of plankton and non-living organic material, or “detritus,” at different depths.

They concluded that the lake, with its average depth of 280 feet (85 meters), has enough of the mussels’ fecal pellets to keep the carp from starving and even enable them to grow while seeking other fertile territory, such as Wisconsin’s Green Bay, Alsip said.

“It definitely increases their chance of surviving the journey,” he said.

Duane Chapman, a fish biologist with the U.S. Geological Survey, led previous studies that raised doubts about whether Asian carp could find enough food in most of Lake Michigan. They focused on the availability of microscopic plant life in areas near the surface that could be observed with satellite data, he said.

The University of Michigan researchers didn’t contradict the USGS conclusions but built upon them in their model by including estimates of other food sources, including tiny plants in deeper waters as well microscopic animals and the mussel excrement, Chapman said.

“I have no quarrel” with their findings, he said. “What they’ve done is just take our work and add more stuff to it, and that’s a perfectly legitimate scientific path.”

Lake Michigan’s cold temperatures, depths and lack of food would pose challenges for the carp, said Kevin Irons, aquatic nuisance species program director with the Illinois Department of Natural Resources. But the Michigan study underscores their hardiness, he said.

“They can fast for long periods of time and travel long distances quickly,” Irons said. “This reinforces the importance of investing in prevention.”

Democratic Sen. Gary Peters and Republican Rep. Bill Huizenga, both from Michigan, said the study ramps up pressure on Congress to fund programs that protect the lakes from the carp.

“We are on the verge of an unstoppable crisis for the Great Lakes region, and now is our best chance to stop these aggressive fish from crashing our economy and environment,” said Molly Flanagan, vice president of the Alliance for the Great Lakes, an advocacy group that favors the Brandon Road Lock and Dam upgrade. /jpv