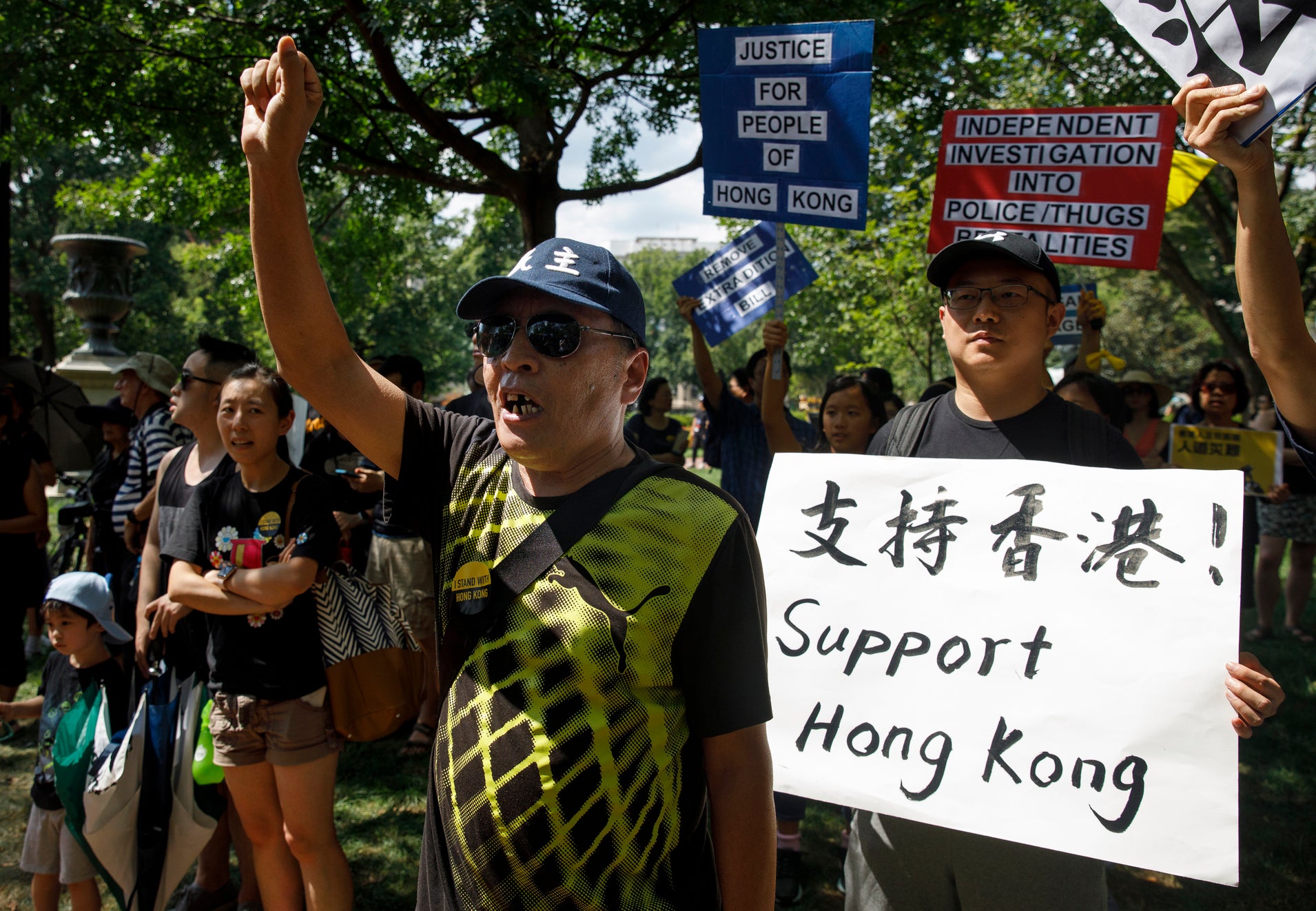 People gather in Lafayette Square in front of the White House in Washington, Sunday, Aug. 18, 2019, in solidarity with the “Stand With Hong Kong, Power to the People Rally” in Hong Kong. (AP Photo/Carolyn Kaster)

WASHINGTON — Twitter said Monday it has suspended more than 200,000 accounts that it believes were part of a Chinese government influence campaign targeting the protest movement in Hong Kong.

The company also said it will ban ads from state-backed media companies, expanding a prohibition it first applied in 2017 to two Russian entities.

Both measures are part of what a senior company official portrayed in an interview as a broader effort to curb malicious political activity on a popular platform that has been criticized for enabling election interference around the world and for accepting money for ads that amount to propaganda by state-run media organizations.

The accounts were suspended for violating the social networking platform’s terms of service and “because we think this is not how people can come to Twitter to get informed,” the official said in an interview with The Associated Press.

The official, who spoke on condition of anonymity because of security concerns, said the Chinese activity was reported to the FBI, which investigated Russian efforts to interfere in the 2016 U.S. presidential election through social media.

After being notified by Twitter and conducting its own investigation, Facebook said Monday that it has also removed seven pages, three groups and five accounts, including some portraying protesters as cockroaches and terrorists.

Facebook, which is more widely used in Hong Kong, does not release the data on such state-backed influence operations. The company also does not ban ads from state-owned media companies.

“We continue to look at our policies as they relate to state-owned media,” a Facebook spokesperson said in a statement to the AP. “We’re also taking a closer look at ads that have been raised to us to determine if they violate our policies.”

Twitter traced the Hong Kong campaign to two fake Chinese and English Twitter accounts that pretended to be news organizations based in Hong Kong, where pro-democracy demonstrators have taken to the streets since early June calling for full democracy and an inquiry into what they say is police violence against protesters.

Though Twitter is banned in China, it is available in Hong Kong, a semi-autonomous region.

The Chinese language account, @HKpoliticalnew, and the English account, @ctcc507, pushed tweets depicting protesters as violent criminals in a campaign aimed at influencing public opinion around the world. One of those accounts was tied to a suspended Facebook account that went by the same moniker: HKpoliticalnew.

About 200,000 more automated Twitter accounts amplified the messages, engaging with the core accounts in the network. Few tweeted more than once, the official said, mostly because Twitter quickly caught many of them.

The Twitter official said the investigation remains ongoing and there could be further disclosures.

The Twitter campaign reflects the fact that the Chinese government has studied the role of social media in mass movements and fears the Hong Kong protests could spark wider unrest, said James Lewis at the Center for Strategic and International Studies.

“This is standard Chinese practice domestically, and we know that after 2016 they studied what the Russians did in the U.S. carefully,” Lewis said. “So it sounds like this is the first time they’re deploying their new toy.”

Twitter has sought to more aggressively monitor its network for malicious political activity since the 2016 presidential election and to be more transparent about its investigations, publicly releasing such data about state-backed influence operations since October so others can evaluate it, the official said.

“We’re not only telling the public this happened, we’re also putting the data out there so people can study it for themselves,” the official said.

As for state-backed media organizations, they are still allowed to use Twitter, but are no longer allowed to pay for ads, which show up regardless of whether you have elected to follow the group’s tweet.

Twitter declined to provide a list of what it considers state-backed media organizations, but a representative said it may consider doing so in the future. In 2017, Twitter specifically announced it would ban Russia-based RT and Sputnik from advertising on its platform.  /muf