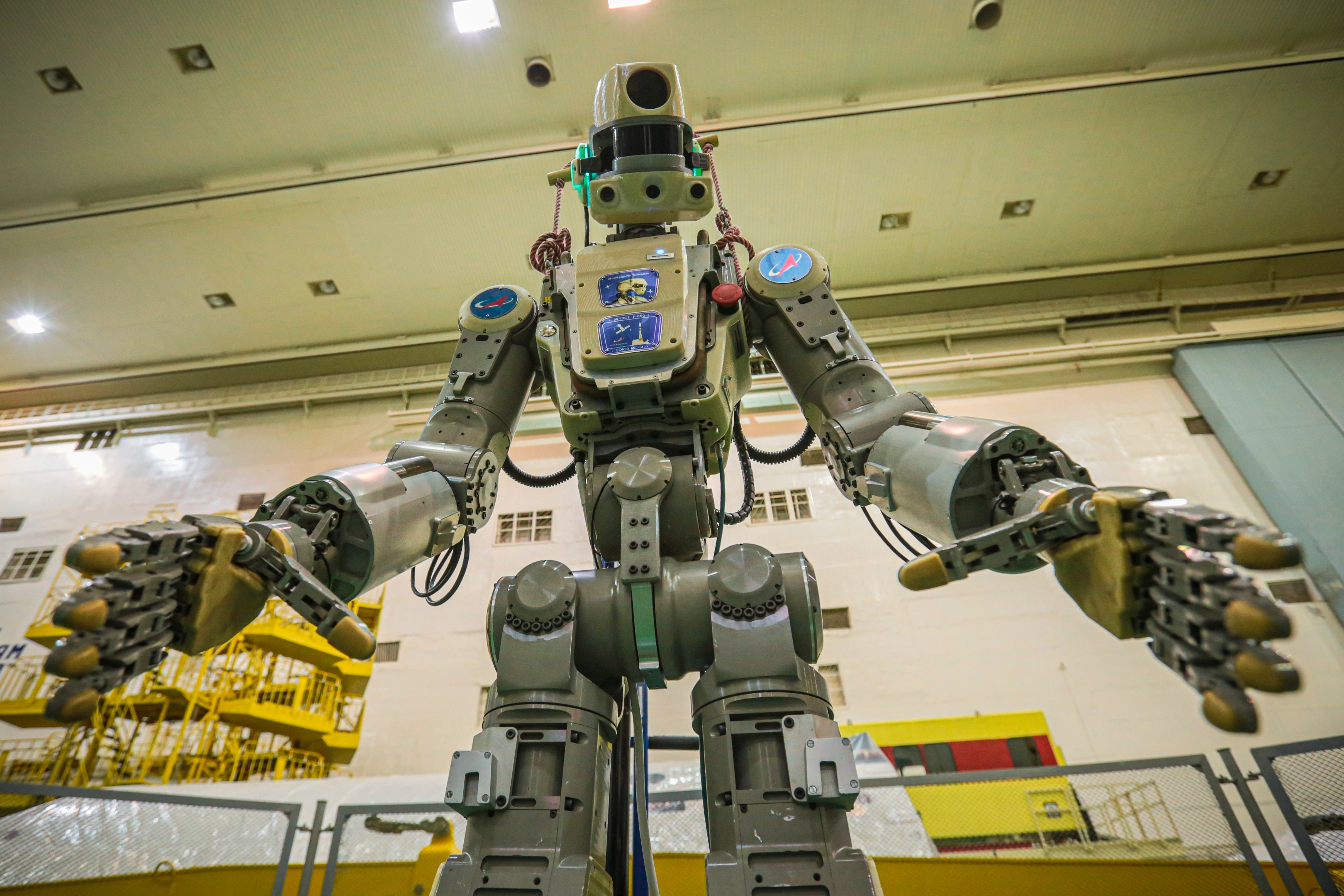 In this photo taken on Friday, July 26, 2019, and distributed by Roscosmos Space Agency Press Service, the Fedor robot is seen before being loaded into a Soyuz capsule to be launched by a new Soyuz 2.1a rocket from the launch pad at Russia’s space facility in Baikonur, Kazakhstan. The new Russian rocket, that is expected to replace the current model sending manned missions into space, blasted off Thursday, carrying a Soyuz capsule with a humanoid robot that will be tested in spaceflight conditions aboard the International Space Station (ISS). (Roscosmos Space Agency Press Service photo via AP)

“Contact confirmed, capture confirmed,” a NASA commentator announced, while a statement on the website of Russian space agency Roscosmos also said the Soyuz MS-14 craft had managed to dock.

On NASA TV, which broadcast the event, the commentator praised the vessel’s “flawless approach to the ISS”.

“Second time was a charm… the crew is up to seven,” he said, referring to the six humans already aboard the space station.

The craft blasted off Thursday from a Russian spaceport in southern Kazakhstan and Fedor is due to stay on the ISS until September 7, learning to assist astronauts there.

“Let’s go. Let’s go,” the robot was heard saying during the launch, repeating the phrase used by the first man in space Yuri Gagarin.

Soyuz ships are normally manned on such trips, but this time no humans were travelling in order to test a new emergency rescue system.

The MS-14 was carrying 670 kilograms (100 stone) of dry cargo including “scientific and medical equipment, components for the life-support system, as well as containers with food, medicines and personal hygiene products for crew members,” Roscosmos said.

An aborted attempt to dock on Saturday had increased uncertainty over the future of Russia’s space program which has suffered a number of recent setbacks.

Last October, a Soyuz rocket carrying an American and a Russian had to make an emergency landing shortly after lift-off — the first failure in the history of manned Russian flights.

On Saturday, NASA had said the Soyuz craft was “unable to lock onto its target at the station”.

Russian flight controllers had told the ISS crew it appeared the problem that prevented automated docking was in the station and not the Soyuz spacecraft, NASA added.

Robots like Fedor will eventually carry out dangerous operations such as space walks, according to the Russian space agency.

Fedor is not the first robot to go into space. In 2011, NASA sent up Robonaut 2, a humanoid developed with General Motors that had a similar aim of working in high-risk environments.

It was flown back to Earth in 2018 after experiencing technical problems.

In 2013, Japan sent up a small robot called Kirobo along with the ISS’s first Japanese space commander. Developed with Toyota, it was able to hold conversations — albeit only in Japanese.