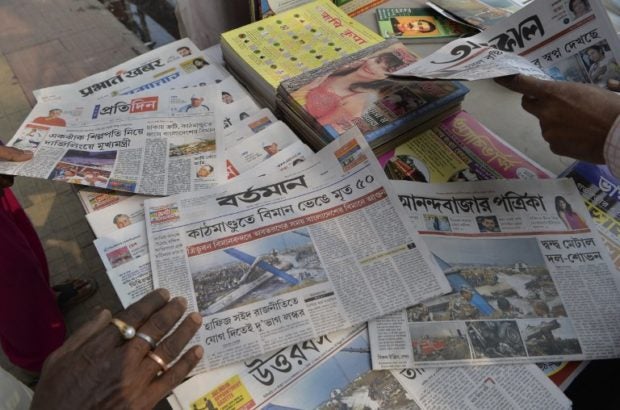 BANGKOK  — US President Donald J Trump may have done a singular disservice to the global effort to fight misinformation on multiple platforms by categorizing professional media critical of him as purveyors of “fake news.”

The impact of conflating professional and social media is a particular concern in Asia, as governments put in place legislation and measures to contain fictitious information flows masquerading as factual reportage online.

It is, therefore, helpful to keep in mind that mainstream professional media – while it can and does get it wrong on occasion – is rarely guilty of malintent.

And when it is, there are extant laws including civil/criminal legal remedies to prosecute these exceptions for defamation, slander and libel.

Fake news, on the other hand, is arguably very much an exclusively social media linked phenomenon.

Several Asian countries rely heavily on social media for information, making them particularly vulnerable to the spread of fake news.

What is fake news?

As the BBC puts it: “The problem of deliberately falsified news articles, masquerading as properly-researched journalism, goes back centuries.”

Although disinformation has always existed, a range of new tools such as social media and messaging apps have made it easier to spread falsehoods. “Fake news is made-up stuff, masterfully manipulated to look like credible journalistic reports that are easily spread online to large audiences,” according to a widely quoted definition by PolitiFact.

Sober voices in government and media broadly accept that the absence of a professional filter before the dissemination of incendiary opinion, purported facts and bias dressed up as reportage has the potential to cost lives, spark societal conflagrations and slander reputations of individuals/organizations.

In Asia, given the right to free speech is subject to reasonable restrictions in most if not all countries, this has resulted in calls for regulation of social media to prevent the spread of fake news which many governments have been mulling or have acted on over the past few weeks and months.

In South Korea, last week, the Moon Jae-in administration pledged to intensify its efforts to eradicate what it perceives as misleading news content that could undermine economic and security prospects. The Korea Herald reported on 21 August: “The government is stepping up efforts to prevent fake news from undermining its major policy initiatives.”

“While dealing with the serious economic situation, we should be cautious about the possibility that fake news, falsified information and exaggerated prospects could increase market instability,” Moon is quoted to have said by the newspaper during a Cabinet meeting on 13 August.

The immediate trigger for his remarks appeared to be what he saw as biased criticism of his security and economic initiatives. Content containing harsh criticism of his North Korea policy and the trade dispute with Japan has been overflowing on YouTube and other online platforms.

In India, earlier this week, the country’s top constitutional court restrained a High Court from passing final orders on a public interest litigation asking for interlinking of citizens’ social media profiles with their unique national identity number database for authentication of identity.

The petition, which reportedly has its supporters in the Narendra Modi Administration, argues that this interlinking was necessary to tackle fake news and other cybercrimes.

Privacy concerns have naturally come to the fore. But the rampant spread of fake news and rumors via social platforms which have been identified as the triggers for multiple incidents of mob violence by investigating agencies, for example, has provided resonance to the petitioners’ plea.

Just under two months ago, Singapore’s controversial Protection from Online Falsehoods and Manipulation Act (POFMA) was voted into law. It empowers any Singaporean government minister to issue a range of corrective directions against online ‘falsehoods’ deemed to be against the public interest.

Elvin Ong and Isabel Chew of the University of British Colombia writing in the East Asia Forum make the point that “the law over-invests power in the executive by allowing it to determine what a falsehood is and what is contrary to the public interest.”

But, as The Straits Times reported, ministers’ decisions are open to judicial review. And the ‘better safe than sorry’ approach of the Singapore law seems to have found societal acceptance.

POFMA itself came on the back of Malaysia’s 2018 Anti-Fake News Act enacted under the previously long-ruling Barisan Nasional (BN) regime which was repealed last week  (16 August).

Bucking the trend in Asia, Minister Mohamed Hanipa Maidin told lawmakers: “There are sufficient laws to deal with fake news; new legislation isn’t needed. We already have existing laws, such as the Communications and Multimedia Act 1998 and others.” The BN regime had been criticised by the ruling Pakatan Harapan coalition for using the Act to stifle its voice when it was in opposition.

Indonesia launched its cyber security agency last year as the world’s biggest Muslim majority country moved to tackle online religious extremism and a flood of fake news on social media. It has been highly active as millions of Indonesians are going online for the first time – more than 150 million out of 255 million Indonesians are now said to be Internet users – just as concern about fake news reaches fever pitch.

In Sri Lanka, the government introduced five-year jail terms in June this year for those caught spreading fake news and hate speech on social media following a surge in online vitriol and disinformation in the aftermath of the Easter suicide terror attacks. Offenders will also be fined one million rupees. The penal code is being amended to introduce the new penalties.

Cambodia introduced its own fake news law last year under which anyone posting misinformation on social media or websites can be punished with up to two years in jail and fines of US$1,000. All websites have in recent weeks been told they must register with Cambodia’s Ministry of Information.

The Phnom Penh Post reported Prime Minister Hun Sen had warned that his government was employing technology with which it could home in on any Facebook user in “only six minutes”.

From 1 January this year a new Cybersecurity Law came into effect in Vietnam which requires the likes of Facebook and Google to open offices and store data in the country, remove ‘toxic’ fake news content from their platforms when asked to by government and, in specific cases for law enforcement, hand over user data to the authorities.

The government has fended off criticism and is implementing the law vigorously as “dissemination of fake news and cyberattacks directly cause serious economic losses and threaten security/social so must be curbed”.

In the Philippines, an anti-fake news bill was proposed in 2017 in the Senate. This was eventually incorporated into an updated version of the penal code wherein it is now ‘unlawful for any person to maliciously offer, publish, distribute, circulate or spread false news and information’.

The case of independent journalist Maria Ressa, founder of online news platform Rappler, is well known – earlier this year, both Ressa and Rappler were slapped with charges of cyber libel for a report that was published before the libel law came into effect.

President Rodrigo Duterte has made no secret of his dislike for Rappler, accusing the platform of being owned by US investors and carrying ‘fake news’ as recently as a couple of weeks ago.

As for Thailand, it adopted the Computer-Related Crime Act in 2016, a law that equips the government with the ability to clamp down on anyone propagating information online it deems ‘false’.

A more mature media, though, has been emphasising the need for educating the public on issues around fake news. The Nation urged the government and professional media to emulate the Finnish effort to curb fake news:

“Statistics show Finland’s patient and comprehensive campaign to halt the spread of fake news is starting to see positive results. A key element of the strategy is education – teaching young students to be alert to falsities they encounter online, to be wary of what’s presented as fact and to be resourceful about verifying information.”

A research paper titled Trends in the Diffusion of Misinformation on Social Media by Hunt Allcott of New York University, Matthew Gentzkow of Stanford University and Chuan Yu of Stanford University, is simpatico to the argument proffered by tech companies running major social media platforms that their interventions to prevent fake news are making a difference and that’s the way forward to curb the menace while simultaneously protecting free speech:

“In recent years, there has been widespread concern that misinformation on social media is damaging societies and democratic institutions. In response, social media platforms have announced actions to limit the spread of false content.

We measured trends in the diffusion of content from 570 fake news websites and 10,240 fake news stories on Facebook and Twitter between January 2015 and July 2018… Our results suggest that efforts to limit the diffusion of misinformation… may have had a meaningful impact.”

But national governments across Asia have obviously not been impressed and are leading sovereign crackdowns on fake news, some justifiable others not so much, which are likely to intensify.

Pro free speech arguments such as those of Malaysian lawyer and human rights activist R Sivarasa – who once noted with a mixture of sarcasm and pathos that his country’s Constitution guarantees freedom of speech “but not freedom after speech” – appear to have been trumped by the intervention of technology and its misuse.