The said photo was believed to be taken before Duterte was elected as the Chief Executive of the country back in 2016, according to comments to the Facebook post. The photo appears in the Duterte Para sa Bayan Facebook group.

The photo has then stirred some discussion on whether the man seated on a wooden chair, eating with his bare hands while holding a mug was the President or not.

Some say “Duterte” looked somewhat thin in the photo, while others said the photo was taken years back when he was still mayor of Davao City. While there were questions on when was the photo taken, the post nonetheless earned expressions of admiration and support for the President.

Is it really Duterte?

It took netizen Aica Riz Ganhinhin to put the issue to rest when she said that the man in the photo is not the President, but her 73-year old grandfather Ricarte Erese.

In an interview with INQUIRER.net, Aica said her grandfather is often mistaken for the President.

“Sanay na siya! Haha. (He is already used to it).  Once sinamahan ko siya magpacheckup, yung mga doctor sa outpatient department nagpapicture sa kanya. (Once he went for a checkup and the doctors at the outpatient department took a photo with him). Nakakatawa kasi pag nasa labas kami (It is funny that when we are out, we get this certain look from people) and we see this certain look from people, gets na namin,” Aica said in an online conversation. 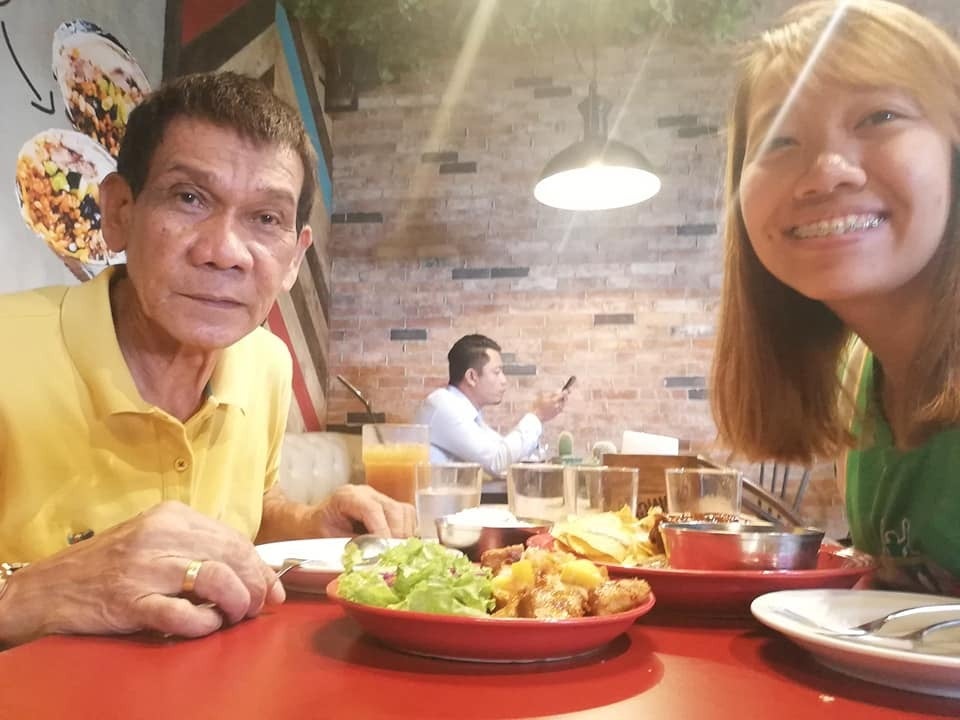 While she could not remember when the photo was taken, Aica said that it might probably when her grandfather went to Sabangan in the Mountain Province his home province.

Aica added that her grandfather often eats with his bare hands.

According to Aica, she stumbled into the photo while she was scrolling her Facebook account over the weekend.

She said that a friend of hers shared the post from a pro-Duterte Facebook group page, and on seeing the photo, she immediately recognized her grandfather.

“Baka daw dapat may talent fee na siya next time, sikat na daw pala siya,” (He said maybe he should get a talent fee for it next time)  Aica said quoting her grandfather.

Aica said her grandfather even has a handheld radio he uses to talk to the subdivision security guards whenever she heads out.

Aica said her grandfather is also the typical Filipino grandfather who always like to have rice in his meals.

She said her grandfather’s  favorite past time is to sleep and watch television, making him the simple person as described by the comments in the Facebook post.

“Lola ko nagpakita sakanya. Natawa siya. Natutuwa siya kasi halos ka age niya lang din daw pala yung President,” (It was my grandmother who showed him the Facebook post. He was delighted to learn that he is about the same age as the President) she said.

As for her message for her grandfather, Aica said that he should use his Facebook account more often in order to know how far he has become popular..

The Facebook photo of Aica’s grandfather remains posted in the Duterte Para sa Bayan Facebook group page as of this writing. It has gathered more than 5,300 reactions and 1,800 shares.  /muf