In a first, three surgeries conducted using robots and 5G 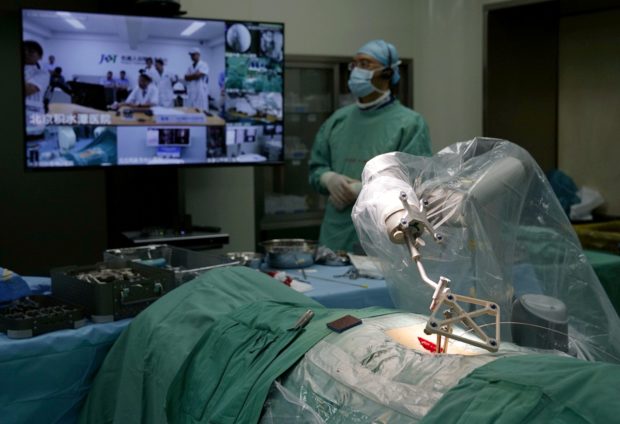 The whole process, monitored by specialists at a hospital in Beijing, was the first time three remote procedures were conducted at the same time.

The surgeries took place in Zhangjiakou, Hebei province; Karamay, the Xinjiang Uygur autonomous region; and Tianjin. Live images were transmitted to a team at Beijing Jishuitan Hospital as the robots executed their preset programming commands.

At 9:30 am, Tian Wei, head of the hospital in Beijing and team leader, issued the command for the surgical robots to begin their work.

The robots have been designed to carry out many of the tasks, but others must still be done by humans, such as implanting devices within bones.

The operations on Tuesday were all completed at around 1 pm.

“The combination of 5G technology with surgical robots is a huge technological advance that will help us share our skills with more patients in distant regions,” Tian said. “People across society can now have access to top medical resources. In the future, using robots and 5G will be common. The medical community will be smarter.”

Jiang Wenxue, head of orthopedics at Tianjin First Central Hospital, where one of the surgeries took place, said 5G technology provided clarity and continuity of images－videos and still photos－as well as stability, reliability and safety, which helped the doctors in Beijing monitor progress and communicate with their counterparts in remote operating rooms.

“With the network, we can perform surgery regardless of the distance,” Jiang said.

The Tianjin subsidiary of the State Grid Group has been promoting the integration of the electrical grid and 5G technology and has developed plans to ensure that power is not interrupted during surgeries.

“The high speed of 5G has resolved the time-lag problem and brought about dramatic progress in remote surgeries,” she said.

Luo Jun, secretary-general of the International Health Industry Forum, a Beijing-based think tank, said the use of advanced technologies such as 5G, 3D printing and artificial intelligence is an unstoppable trend in China’s medical sector.

“The risks of surgery are highly controllable, and the medical teams always have emergency plans for power or network failures,” he said.